Trees are my life

My frequent friend and occasional enemy is dying, and I don’t know what to do.

He’s a crab. Tree, that is. He’s gnarled and bent, has fungus and dead branches, and he’s almost as tall as my house. His long slow demise started before we moved in in 1999, and has accelerated despite the best efforts of our arborist, who, on an annual basis, diligently tries to get him to eek out yet another year. A main branch broke in a windstorm a few years back, rotted to the core. Pruning back deadwood has only resulted in more deadwood showing up. Last year’s healthy branches are this year’s kindling.

I really have a love-hate relationship with him. For one week in the year, about mid-May, he is just glorious, covered in an explosion of fantastic white and pink blossoms that scream to me “spring is over, and summer’s here!” The air is filled with the perfume of paradise, and the bees flourish. A better celebration of a season’s change I could not imagine. Then, at the end of the week, just to remind me of the season going away, the flower petals all drop in the space of 2 days in a literal pink snowfall. My deck collects white and pink drifts, and I am tempted to shovel. 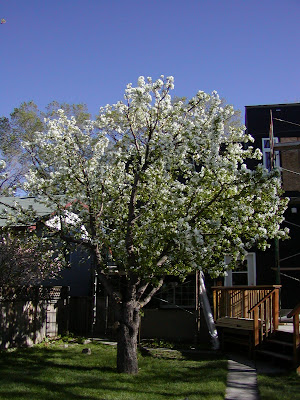 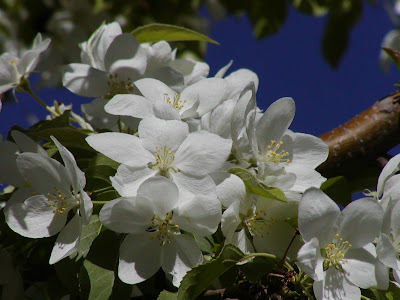 Sadly all those flowers turn to pesky and annoying little crabapples. Branches that once soared to the sky are now bent to face height and are a pain, due for more trimming. The apples ripen, though their tough skins and nasty bitterness make them inedible to us, and remarkably, no birds or animals seem to like them either (wonder why?) until they are overripe. Once overripe, they start falling to the ground in October and November, staining concrete and deck, making the pathways a goopy mess of a game I call “shoe-care hopscotch.” They get so thick shoveling is necessary. They fill the grass, killing it and making messy lumps, which in the spring turn into numerous little treelets growing in my now damaged lawn.

On the bright side, his role as “privacy provider” and “variety bird habitat” is superbly executed, and his shade is very much appreciated. Yes, he provides my neighbour more shade than me, and his cool green space in my yard has been enough to make growing grass under him a challenge (but the ferns like it). Nuthatches and woodpeckers seem to like the bugs he attracts. Sparrows find him a great place to sit and watch me eat my dinner outside. The waxwings always show up once a winter and massacre most of the tree-resident fruit, leaving an amusing pile of detritus on the snow. The spring sees robins and the occasional squirrel getting the year old fruit still on the tree or ground. Some chickadees built a nest at about chest height inside a dead branch that had been cut off a few years back, which we only found long after they had abandoned it. You would think we would have noticed the 2” hole walking past it three times a day, but it somehow escaped us. And since the he sits right in front of two of our windows, he is built in free entertainment for our cat.

His north side is basically dead, and he leans precariously towards the house, so he is not long for this world. 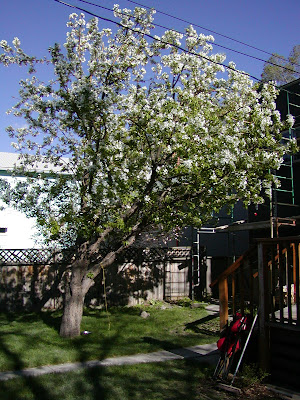 Perhaps the City struggles the same way, whether it is with the poplars along Memorial Drive or the wonderful shade tree that used to stand next to the pool in Rotary Park. For everything, there comes a time. If we let nature take its course – an idea that has struck me from time to time with some of the trees the City cuts down – I suspect we would have more broken bits, more diseased bits, more rot and more unsafe mess on our hands. This, after all, is nature’s way: “survival of the fittest”. I don’t always agree with the City’s approach to this, but my crabapple has made me realize such decisions are not as simple as we would like to think they are.

My tree is not yet dead, and in fact, may be with me for years. When he goes, I will remember the birds and the flowers. In the meantime, I will enjoy the shade, enjoy the green, and be thankful for the reminder of the cycle of life he represents.
Posted by Derek & Karen at 12:51