Saturday dawned cool but it looked like it would be one of the best hiking days of the year. We had planned to head up to the Sparrowhawk Tarns, but it seemed more logical to head uphill as much as possible to gain the best views on a day where the visibility looked like it would be over 100 km without any smoke or haze. So instead of the Tarns, we did the circuit route around Read's Ridge and Mt. Sparrowhawk.

Note: this is a steep uphill trudge. The whole loop is only 7.8 km, but we climbed an astonishing 900 m, our biggest vertical hike for the year on one of the shortest trails. The advantage of steep, though, is that it gets you to great views very quickly. 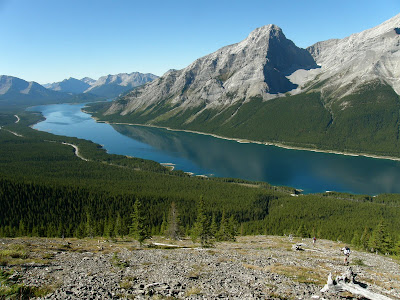 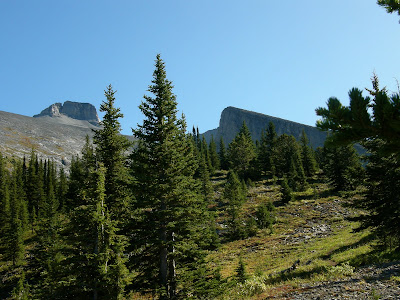 Click on the photo above and look carefully at Read's Tower. There are 4 hikers working their way up that slope.

We did not do that. To have done that would have added another 275 m to the day, and we were not up for it.

Of course, the higher you get, the better the views. Here's looking up the Spray Valley towards Banff & Canmore. 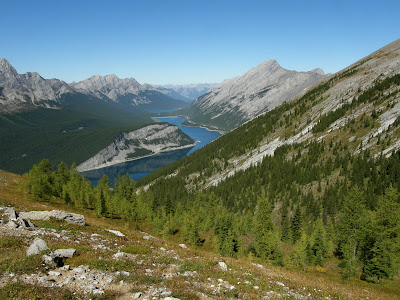 You finally arrive up 600 m at the base of Read's Tower on a pretty grassy hilltop, which happens to be a great place for lunch for both people & critters. This fellow had a lot of something in his mouth. His cheeks are fatter than his butt. 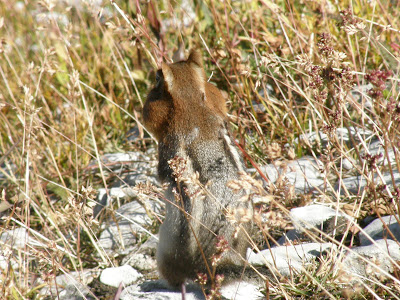 So you have options at this point. You can climb 275 m up Read's Tower, pull a U-turn, and head back down the way you came up. The quality of the trail told me not to do that. Or you can circle Read's Tower, down 50 m through this gully and up 200 m over the col in the centre of the photo below. 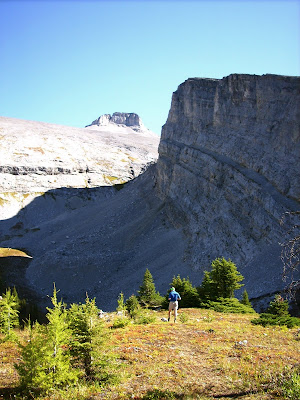 The gully was a blast. Talus/scree Rocks + grass = Pikas. 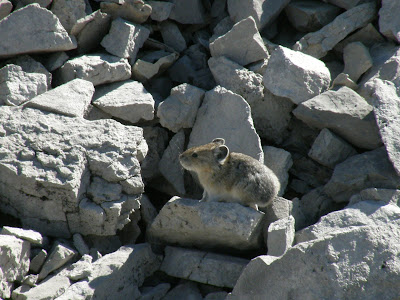 That's 4 straight hikes with Pikas. These guys (we saw 3 or 4) were skittish, and covered a huge amount of territory, running at least 150 m up the slope from where we first found them.

Climbing the gully is a challenge, though not a technical one. It's hugely steep, especially at the top, and there really isn't a consequential path for lots of it. Here's KC working her way up in the shadow of Read's Tower. 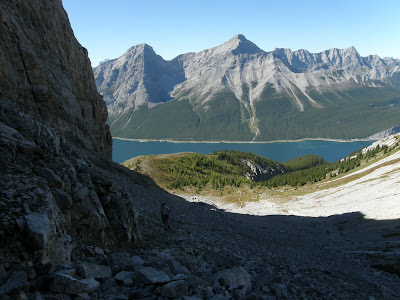 But on top of the col, you get staggering views up the Spray Valley... 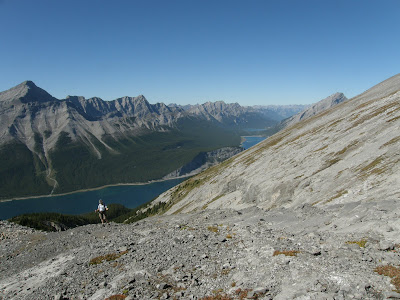 ...and over the other side into the basin under Mt. Sparrowhawk. Interestingly, you can also hike to the top of Mt. Sparrowhawk from this point. That adds another 550 m to the day. Yowzer. 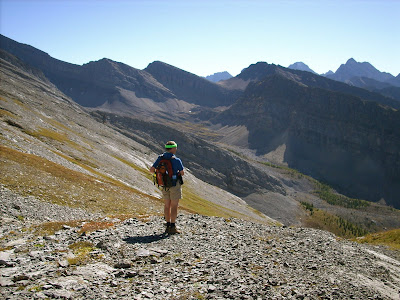 Note that the Sparrowhawk Tarns basin (our original destination for the day) is actually directly over my head in the above photo.

This whole basin is just grass and scree, and though we saw lots of holes indicating marmots or ground squirrels, and found some sheep scat, saw no life in the basin. Views up here are tremendous. Here's the view looking down the Spray Lakes, with Mt. Assiniboine peeking over the shoulder of Mt. Nestor. 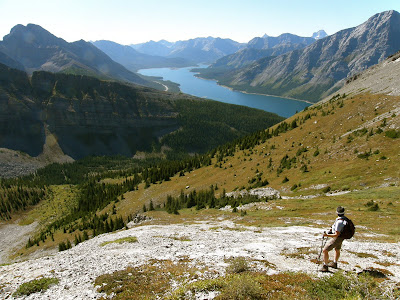 There's no trail to get down. You just get on the right side of the creekbed in the centre of the photo above, follow it diagonally down the the flat spot on the lower left, then head out the meadow. At no time are you in forest. The going has some very steep sections, and some slippery bits. Staying on the grass and dryas beds offers the best footing.

Finally you reach the edge of the hanging valley, 200 m above the Sparrowhawk Tarns trail, and head straight down the slope starting on the right side of the upper rocky area in the photo below. 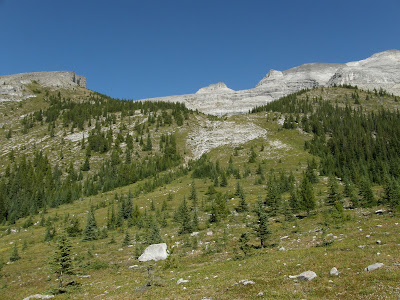 The trail back to the car follows Sparrowhawk Creek in a cool and moist valley with waterfalls and moss. 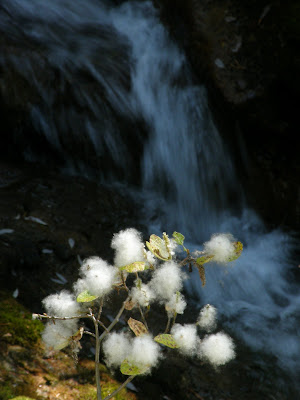 So this was an interesting hike, though a tough one. It came from the "Where The Locals Hike" book by the Copelands. Normally, I don't like their books, but the whole trail from the top of the col to the Sparrowhawk Tarns trail junction earned just 2 lines in Gillean Daffern's book. That notwithstanding, the Copelands version of times for the hike were (as usual) ludicrous. They claim you can make the top of Read's Tower in 90 min from the car. We took two hours to get to the hill below the tower. They claim you can make it from the high point col down to the Sparrowhawk Tarns trail in 30 minutes. Maybe if you slide or fall the whole way; we took 90 minutes.

If you're interested in doing it, know that you do need a guidebook, too. The Copelands are right in that there are better and worse (read: more dangerous) ways down the basin, and without a path to follow, screwups are more likely.
Posted by Derek & Karen at 16:18