The Weekend at the Wet Wing

The forecast for the weekend couldn't have been more wrong. Saturday was supposed to be cloudy with showers in the morning, and sunny in the afternoon. Accordingly, we planned a bike and hike trip into West Wind Valley for the afternoon. The access to the valley is literally 5 minutes drive up the hill at the Banff Gate resort, which we figured we could bike up to.

Well, it dawned sunny, but by 11 AM, the forecast had changed to cloudy in the afternoon with a chance of showers. We got the bikes out after lunch just as it started to cloud over. We rode part the way up the road to Banff Gate Resort, then opted to ride back down and drive up as it was a steep gravel road grunt that was no fun. As we unloaded the bikes at hike start, it started to spit rain. Fifteen minutes into the ride it was raining hard, so we gave up and rode back to the car. But the rain didn't last, and had stopped by the time we got back to the car. So we turned around again and rode back into the valley. We got to the hike part, and ditched the bikes. We had not hiked more than 10 minutes when the heavens opened and it started to pour resplendent with thunder and lightning, so we turned around a second time and headed back to the bikes and to the car again. By the time we made the car this time, we were drenched, but the rain had mostly stopped again. Once bitten, twice shy: we gave up, only to have it start raining about 15 minutes later and rain for most of the rest of the evening. No, I took no photos of the biking or the hiking.

Today was forecast to be sunny and warm. Looking at the sat photos, I thought it would by cloudy and cool, and I was right. It seemed like a good day to climb Ha Ling, a very popular hike in the Canmore area that is very exposed on a sunny day.

I don't know why this hike is so popular. You gain 810 m in a mere 2.8 km, meaning it's a relentlessly steep uphill drudge. The trail's in awful shape, braided down low and with loose scree up high. 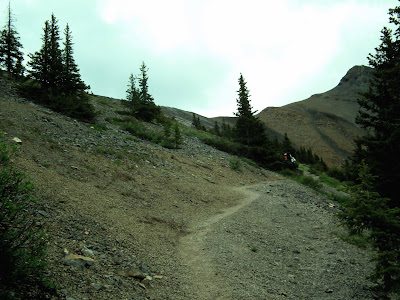 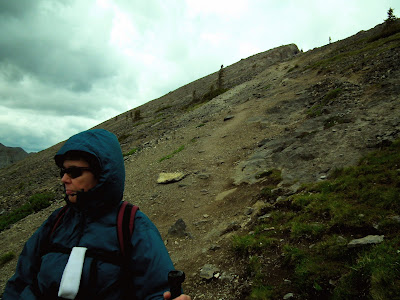 There's pretty much nothing for views for the first hour or more until you hit treeline. Okay, I will admit from treeline up the views are pretty stellar. Just note that there's a cliff edge that is a vertical drop of 1,000' if you take one step too far. 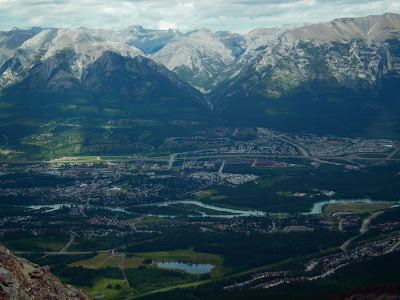 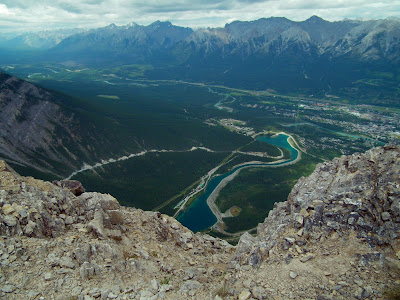 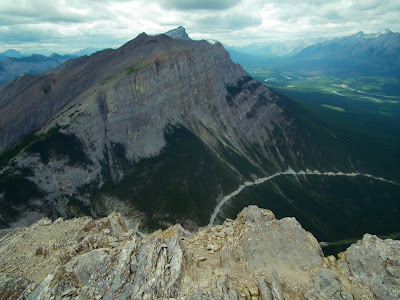 There's little chance to see critters on this hike because of the crowds. At one point, we counted 17 people on the last 300 m of the hike, between the saddle and the peak. At least 100 people hiked the place today, including folks in running shoes with no water nor daypack. No self respecting bear or sheep would be seen anywhere near the place with all the noise. But there were chipmunks and ground squirrels begging for food. We have trained them well. 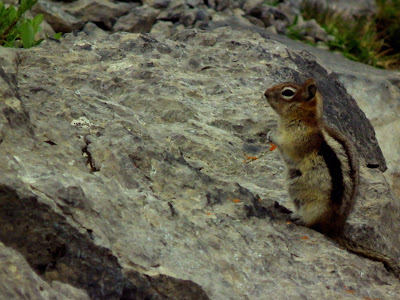 And just as we finished for the day (and 5 minutes after some folks had started the hike) it started to rain and thunder. Again. As we drove back to Calgary, we ran into the storm a second time. 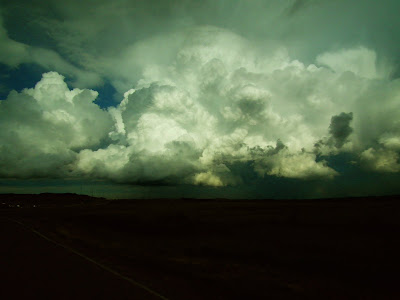 We had to stop by KC's office on the way home, and ran into a HUGE downpour with hail that made rivers flow down Bow Trail and had a vortex of water swirling in her parking lot.
Posted by Derek & Karen at 22:53