Hunt-ing down the Burgess Shales (and Pikas)

A while ago, some friends of mine set up an online auction to raise money for someone who was fighting cancer. In the auction, I bought a guided hike for 12 to the Burgess Shales. While I had been high above Emerald Lake on the Wapta Highline Trail before, I had never been to the quarry. Given it's significance (it's a UNESCO World Heritage site), access is only allowed in guided tours.

It was easy to find 10 folks to join KC and me. My company is full of field geologists who like fossils and who also happen to be avid hikers who are up for an 875 m climb and a 22 km hike.

We generally lucked out with weather. Calgary has been a pit of forest fire smoke for a week with no viz and the acrid smell of a campfire. But Saturday in Yoho was blue sky and cool. The hike starts at Takakkaw Falls which, at 384 m, is Canada's second tallest waterfall. 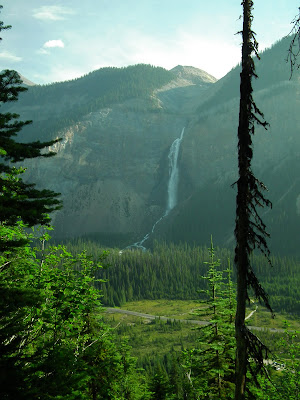 Takakkaw is glacier fed, meaning that by the end of the day it had a lot more water in it than in the morning. Here's a shot from the exact same spot taken at 5:30 PM. 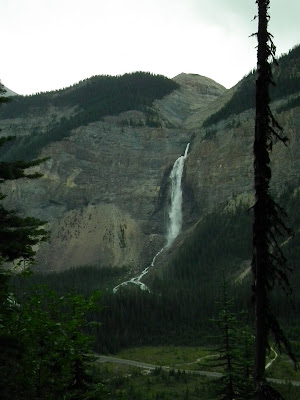 The hike switchbacks up about 280 m, then gently climbs through a dense forest to Yoho Lake, site of a backcountry campground. 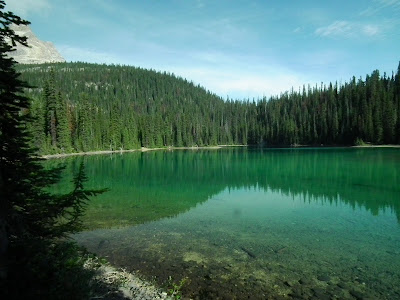 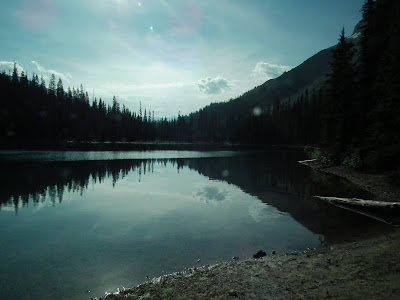 The trail leaves the campsite and plasters itself against the face and scree slopes of Mt. Wapta... 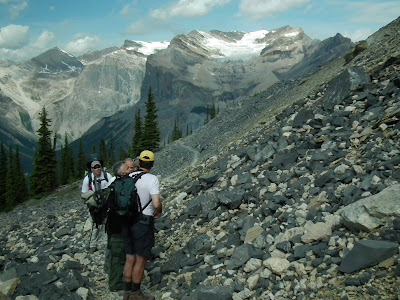 ...as it climbs up to the shale beds. This results in some very cool views, first of No See Um Falls and the Emerald Glacier... 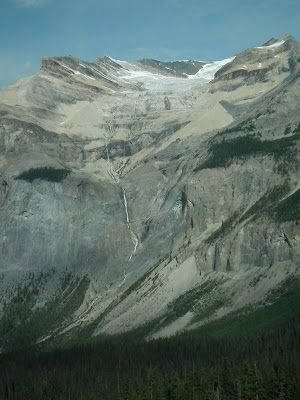 ...then of Emerald Lake itself. 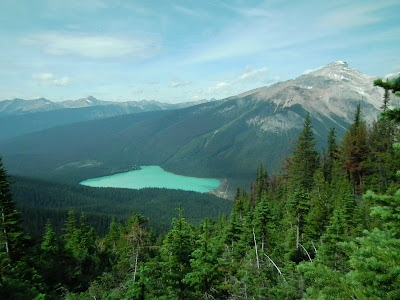 The formal trail skirts the edge of the fossil bed. A separate trail climbs up the last 130 vertical meters to the quarry itself. This trail offers views over Burgess Pass to the Trans Canada Highway. 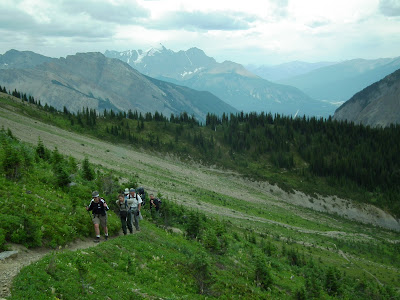 Eventually, you get up to the discovery site and the Wolcott Quarry. I was truly surprised at how small the quarry is. Despite the fact that over 300,000 fossils have been taken from the site, it's only about 100' across and cut 30' deep into the hillside. "Unassuming" would be an understatement. The sample fossils they keep there to show are astounding. 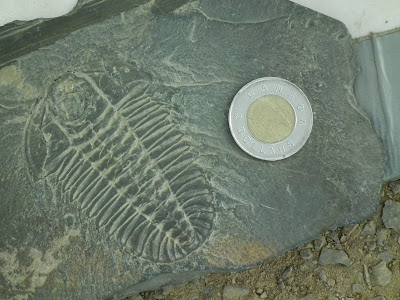 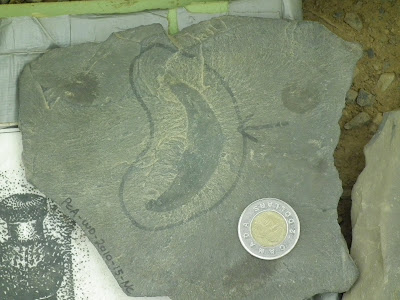 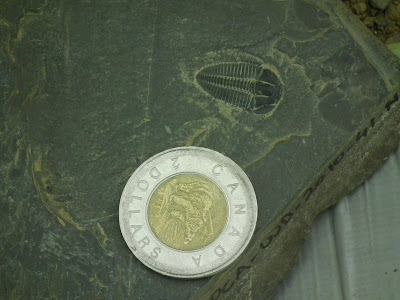 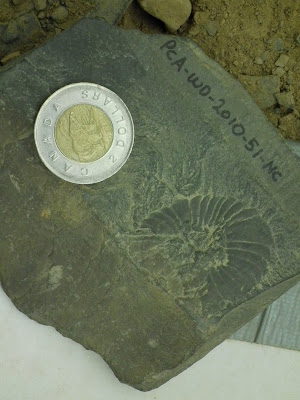 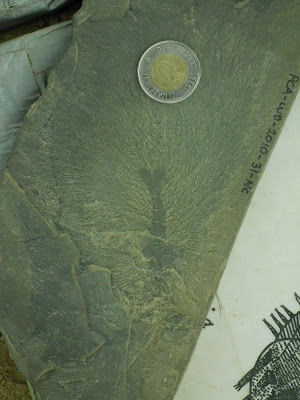 Our guide said the fossils were "everywhere, everywhere". I personally found only 2, and in some ways, I'm not sure they were actual fossils. 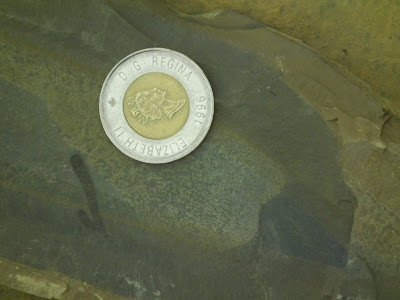 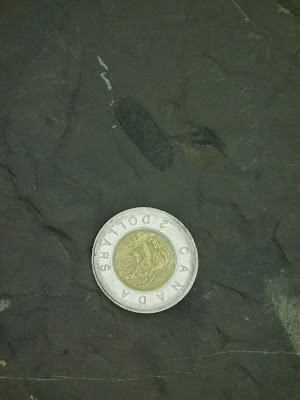 After some 5 hrs hiking up (with another 2+hrs down) you get all of 45 min in the quarry. Ah well.

It started to sock in as we headed down, and rainclouds were swirling up high. 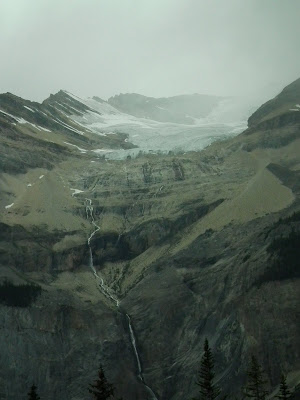 Rain started in earnest for the last 150 m of switchbacks down to the parking lot -- 150 greasy, slippery metres. But it was just a shower and didn't last long.

It was an interesting animal day. I saw a snowshoe hare and a deer on the trail, but both took off and I could get no photos. I saw the typical ground squirrels. But at lunch we sat about 10' from the midden of a Pika who made 4 or 5 trips in to fill it up, at one point transiting under the rocks I was standing on. He was very cute but was clearly not in a mood to stay too still. 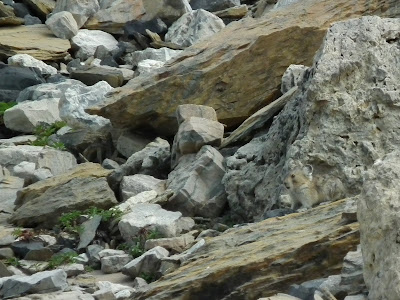 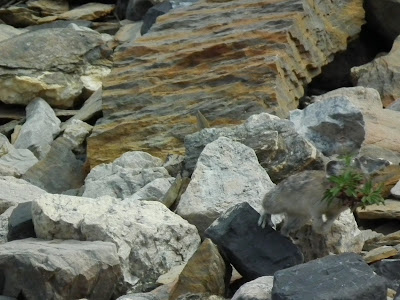 I want to thank my fellow Hunt employees who participated in this hike and in doing so, helped support a family hit by cancer. 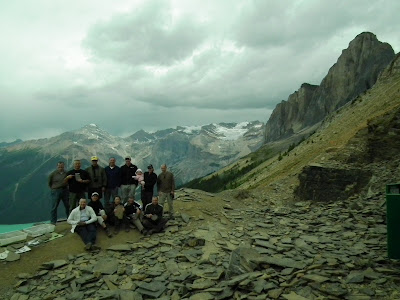