The Ups and Downs of Beach Life

So yesterday our beach was invaded by nasty Portuguese Man-of-War jellyfish. These are not good. Fortunately, they were not big guys; all the ones washed up on the beach were about less than 2" across with tentacles between 6" and 12". But at least 3 people were stung, and even the little ones make red welts like huge bee stings or mosquito bites. Here's a macro shot of one. The bodies are clear, but the tentacles are blue. Fortunately they sparkle in the sun, so were easy to see. 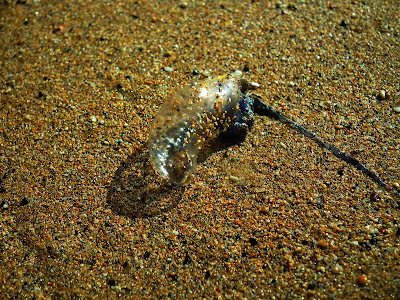 Once folks realized they were there and in the water, the beach pretty much cleared out. These things come into Hawaiian waters on a cycle associated with the moon; box jellies do the same thing. In fact, you can find online calendars that tell you when they're expected. High winds tend to blow them ashore.

Today, when we went back, we checked the high water line and found none before going snorkeling. It was a great snorkel day; we saw 4 turtles, 2 eels and an octopus who was fun to watch because he was being harassed by some fish. The winds were strong this afternoon too; sure enough, more jellies showed up, though not as many as yesterday.

But in with them was a critter I've never seen before. He looked like a jelly but had a shell. 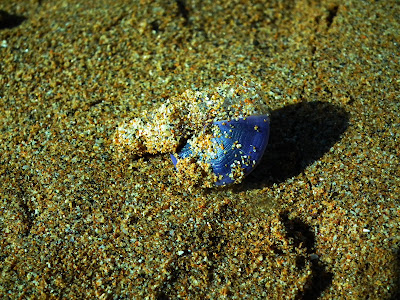 Turns out this is a violet snail, which I think is an exceptionally cool critter. Turns out this little guy eats man-of-war jellyfish, making him my buddy. They are a snail that lives in the ocean and floats on a mass of bubbles, and basically float around at the whims of the wind. Needless to say, if a batch of jellies washes up on shore, these little guys are not usually far behind.

And you thought hanging out on a beach was just about snorkeling and boogie boarding.
Posted by Derek & Karen at 21:09