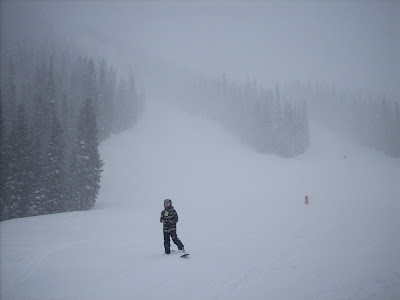 The rotten viz came from a combo of driving snow, fog and blowing snow. But it was only awful where there was no visual reference, so the second you hit the trees, it was paradise. 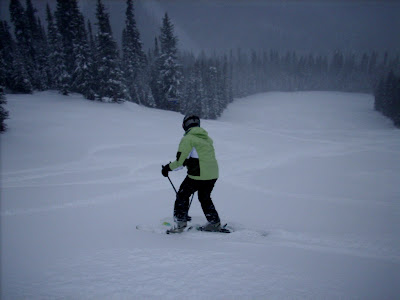 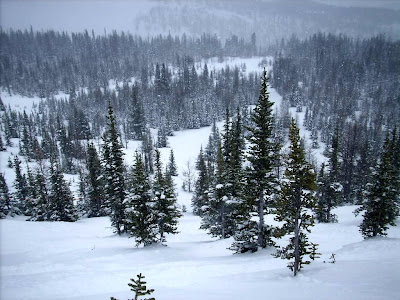 There was 10-25 cm of fresh stuff everywhere, and it was falling at Fernie rates. We rode Eagle Creek around 9:30, and when we rode it again at 11:30, our earlier tracks were gone, filled in by falling and blowing snow. The wind was whipping up awesome snow dunes in the lee of the snow fences up high, but the zero viz meant you couldn't see them. One was 8'-10' high, and had vertical wall faces to it that people were crashing into.
We had some fabulous runs, but the winds just got stronger and stronger as the morning progressed. We saw Tee Pee Town shut just after 11, then Angel, then came down to find Goat's Eye closed and a huge line to upload on the gondola. It was a busy day on the hill, so we did some mental math and figured the world would hit Standish and Wawa, and the lines would be horrid. So we took the ski out down to Creekside for lunch. Once we found out all the good lifts were still closed after lunch, we bailed. Everything re-opened around 3 PM, and we heard it was very good, but we had had a fantastic morning and didn't care.
Sunday was calling for better viz, weaker winds, and sun in the PM. The morning was a near carbon copy of Saturday, with another 10-25 cm of powder depending on where you went, and the viz was a whole lot better. Exposed places up high were wind polished to sheets of ice, but again, the moment you hit the trees, more paradise. Here's yours truly enjoying it. 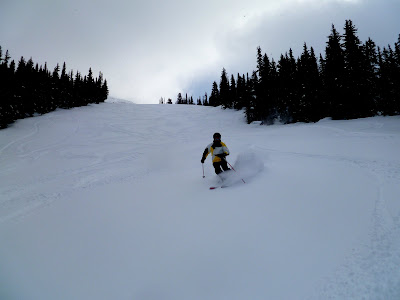 The wind had created some wicked tree wells, one of which caught me, and one of which I managed to get a picture of. Imaging coming around a tree and finding this little 3' deep gully. 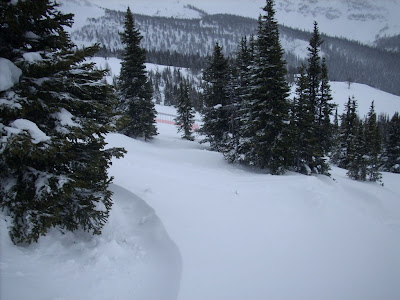 By noon, it had started to clear somewhat, and that made it easier to find the freshies. 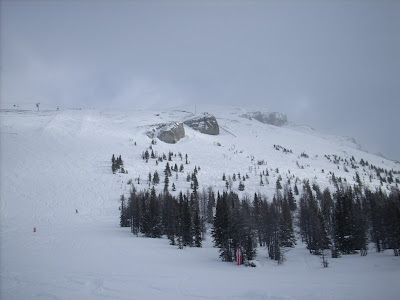 We uploaded via Tee Pee Town near noon and while on it were surprised the lift was even running. The winds blowing on the top face must have been 80 km/hr, and it closed just after we got off. Up high on Divide near Hill 205 it was "interesting". Exposed stuff was blown clear, but any slightest bump on the snow was collecting wind sift. This actually made for really nice conditions. Note the clouds of blowing snow in the background. 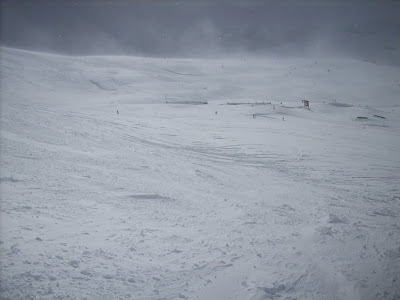 The big 4 lifts shut again while we were in for lunch. We lapped Strawberry (in surprisingly small crowds) a few times then headed back to Goat's Eye, which was the first to get back running around 1:30. There was still plenty of fun powder to be had.
Most of the main lifts had a delayed opening for avi control; Goat's Eye, for instance, didn't get going until 9:45. They must have launched 25 bombs today. They set off big slides in the Dive, on the Shoulder, in the Southside Chutes, on the road (it was buried again just like a few weeks ago) and on Wild West. They set off two biggies in the Eagle Basin. There's one going in the centre of this picture, and the diagonal brown line is debris from one they set off only minutes earlier. 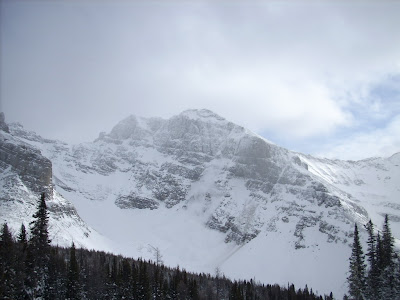 I said a few posts back that we don't tend to get a lot of big powder days. This weekend was two more that are proving me wrong. Despite the lift closures, both days had awesome amounts of awesomeness.
Posted by RyderDA at 21:08