Going where you can't

As a volunteer with Alberta Parks, I'm right now allowed into places a Ministerial Order prevents people from going. In this case, it's because I'm working the grizzly bear project. Today, I got to go south of the Wedge Pond closure on Highway 40, down all the way to Peter Lougheed Provincial Park.

Much of this post I put up without photos today on the Kananaskis blog, an excellent site for news and info about Kananaskis.

Highway 40 is closed at Wedge Pond, with a single lane bride over Evans-Thomas creek.
The bike bridge is still there. We crossed it in 2011. But so what? It starts in the middle of nowhere, ends nowhere, and the creek currently runs around it, not under it.
Once past the Wedge Pond roadblock, crews are working hard on the road washouts...


...with the biggest crews (multiple backhoes and dump trucks) working the mess at Grizzly Creek, Ripple Rock Creek and Hood Creek...
...where the pavement was removed in numerous places and hundreds of tons of debris hit the road.
The road's looking really good, but needs more time. There's also a huge mess spanning from Opal Day Use north to Galatea. Numerous hillsides also slumped and put debris on the road but these have mostly been fixed.

South of Hood Creek all the way to the North Interlakes, the roads are fine. Parks staff is escorting people in and out to get vehicles stranded back there (Boulton Trading Post has ~15 RVs and 5 pickup trucks awaiting retrieval).

So, to the trails: Starting at the Interlakes...
...we walked the Three Isle Lake trail to past Invincible Creek.
The trail's fine until the bridge over Invincible, which is still there, but is under 2' of water, and is now the top of a very pretty waterfall.
The creek is still roaring, and was probably 100' wide during the peak of the flood.
There's a very dangerous way to cross the torrent on a log jamb. I did it twice and can't really recommend it.
Someone else was back there on a bike today. I hope it was a Parks person.
Headed back down the moonscape of the Palliser slide... 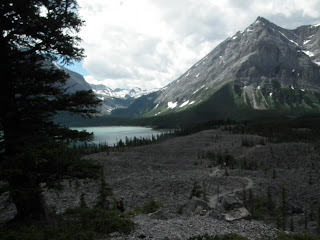 ...and went past the Point campground, which looks OK (though we didn't go in). In the forest, we found a boreal toad, who despite being slightly "poisonous", is quite cute.
Crossed the Kananaskis on the still-intact-but-listing bridge at Lower Kananaskis Falls (the river still runs under one end, which I hope won't cause it to wash away).
The river is still in full flood and has partially eroded the bank with the trail on it. The trail here was under water and shows the effects of that.
Wherever it was before, the memorial bench is now stuck in the middle of the river.
The wildlife seems to like the fact that we're not there. On the trail, saw multiple recent bear scat and tracks...
...recent wolf and coyote scat, recent moose tracks and scat. I also saw a moose near the Pocaterra Day Use area, but she would not hold still.
My time back there today really hammers home that there are parts of the backcountry that are just fine, but the parts that aren't safe are really not safe. I was in a meeting with Parks this past week where they ran through a quick inventory of the damage, and while it's not my place to disclose the discussion in that meeting, it's pretty safe to say that almost all bridges are damaged or gone, and trails in low lying or narrow creek valleys are very badly damaged. Trailheads and parking lots are missing or filled with rock. Creeks are still rivers, and rivers are raging. While some places made it through unscathed, you may not recognize some places when you get there next.

I have spent little time in this area, and had only hiked these trails once, many, many years ago. It's a very cool space that I must come back to.
Posted by RyderDA at 22:07

Thanks for the update. Did you look at the upper kananskis rive bridge? Hope it is still there.

Didn't get as far back as the Upper K bridge, so don't know.

Great update! One a different note; Have you solved the problem with the poluted drinking water by now?

Edwin, we shock chlorinated the well three days ago. Have to wait about a week to retest it. Until then, it's more bottled water (though with the amount of chlorine I can smell, I should be able to drink my tap water...)