Note: Once again, Powderwatch.com is down, so as an interim, my skiing posts are here.

It was almost a bluebird sunny day up at Sunshine today, with the real upside being an utter lack of wind.
These two things are good. It has been far too windy the last two weeks, and while clouds with snow in them blocking the sunlight can be very good, that kind of wind can wreck havoc with snow conditions.

When I was last up on Monday, there was more fresh snow than I had ever skied. Well, it took a week, but it's mostly tracked out. Mostly. I'll tell you where it wasn't in a moment.

The wind certainly made Bye Bye Bowl a mess. Despite 90 cm last week, there's more exposed rock at the top and skier's left than there has been since it opened. It's also wind crusted and quite the challenge. Not recommended.

One of my favourite powder stashes, to skier's left of the terrain park, looks untracked and powderfull. But it's solid, unbreakable windslabs. Not recommended.

The rest of the hill? Wonderful cruising. Lots and lots and lots of awesome turns to be had -- and I personally think the snow is better on Goat's Eye than up on Divide. Divide seems to be firmer, likely due to the wind. Assiniboine Flats still has some untracked, but it's wind crusted and not that deep. The Laryx/Dirty Little Corner face still holds some, but it's boot top at best.

We absolutely lucked out today, as more terrain opened. We were at the top of Goat's Eye when they dropped the rope and opened Gold Afterburner (fantastic grooming) and also the access to the traverse to Gold Scapegoat and beyond.
So we were the first to get over to untracked deepness and glory, first in Cleavage...
...the Ewe First trees...
...and Goat's Head Soup. 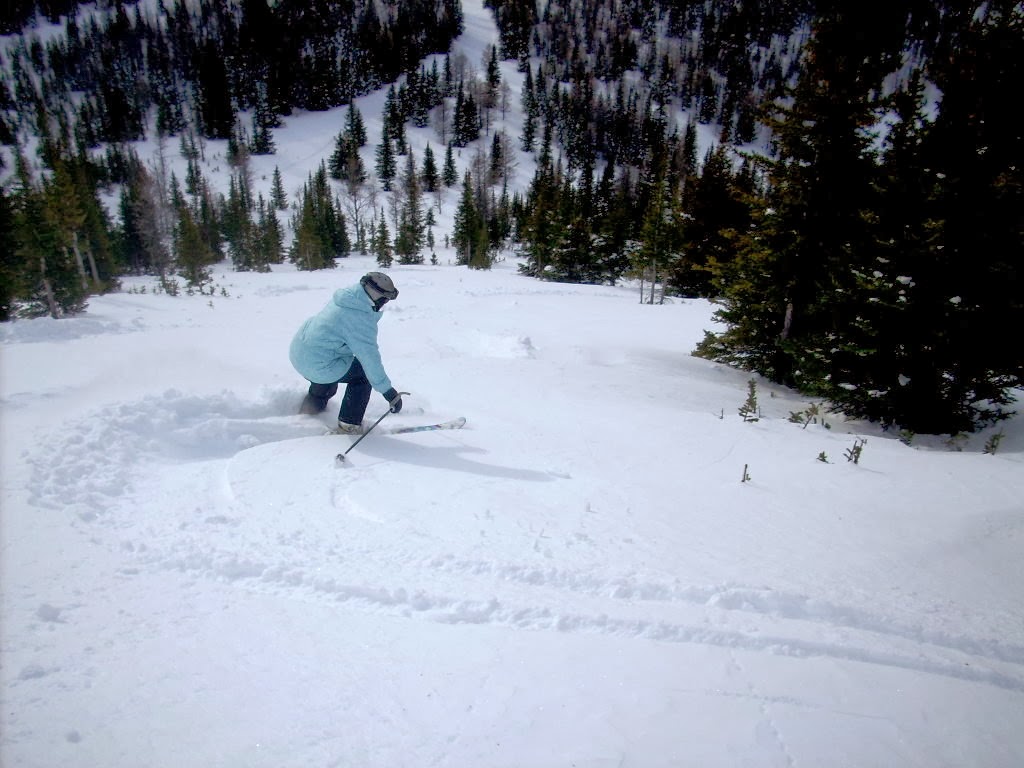 How deep is the snow back there?

Yes, the snow was really that deep. But it was also really supportive. So if you fell (and Karen did) getting up was a pain, because your butt sank down 50 cm and if you were silly enough to try to push off with your hands, they sank to ground. If you pole planted hard while skiing, the pole sank away to nothing.

But your skis barely sank in 5 cm standing still, and when you moved, you actually floated onto the the surface readily at the unweighted apex of the turn...


...then sank only to your boot tops at the peak of pressure. I think the wind consolidated all that waist deep powder of last Monday.

The end of that traverse as it connects to Scapgoat is a bit rocky so be very careful. the rest is fine. The crowd was small today, so I'm telling you point blank that's the place to start tomorrow, because there were still lots of first tracks available when we left. Just DO NOT CROSS THE AVI CONTROL ROPE AT THE WILDSIDE. It's marked closed. Pay attention to this and every other avalanche closure. Why?

Patrol bombed the Farside today, and it went to ground and created a 1.5 avalanche, plus numerous sympathetic ones in the Wildside. Best view of the mess is from the TeePee Town Chair.
There are still a lot of hanging bits ready to go. Don't cross that rope or it could be the last rope you ever cross.

Avi conditions are horrid out there. There have many skier triggered avi incidents recently in slack country and back country areas. I could see many avalanches on Mt. Rundle & Cascade just driving to Sunshine today. Everything is just itching to fall.

For instance, there were also at least 4 natural avalanches today on Borgeau in the bowl above the Borgeau Left Hand ice climb, including ones that had debris come to the top of the icefall.
It's never a good idea to cross ropes, but these days, you could die doing it. I would prefer you stay a reader of my prose than be an accident statistic.