It has been 3 weeks, and you can guess that the reason for no posts is no progress on the kitchen. You would be basically right, though some minor work (like installing the glass in the back door) was done on week 19. 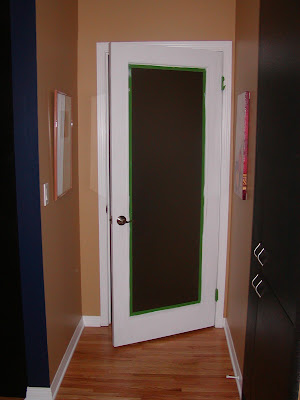 We also received the counter stools that we ordered when the counter top was fitted, and they work perfectly. 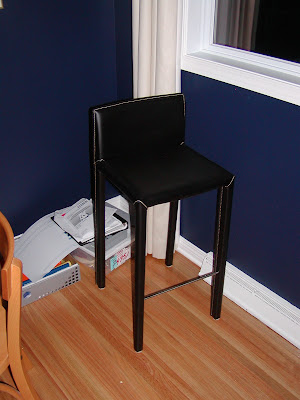 We finally got frustrated and last week sat down with our designer and constuctor. As usual, they said "we'll get back at it Monday," since parts were starting to arrive, such as the lights and the long awaited hood fan.

Sure enough, they were here Monday, but very little actually got done. Yesterday we arrived home to the lights having been installed, and not surprisingly, were surprised, as many things they installed weren't what we wanted. Discussions with our designer were weird; he claimed to have ordered some of the lights months ago, when in a meeting on August 3rd to select lights, we were told he hadn't ordered any. We had 7 pendants; we wanted 3. Two were dangling over the diningroom table, which can't work because the table isn't centred. The ones hanging there were supposed to be the ones hanging over the peninsula, and the ones over the peninsula were the wrong size. The ones in the hallway were the wrong fixtures and... well, you get the point.

Today, the hood fan was finally installed, and it looks great. 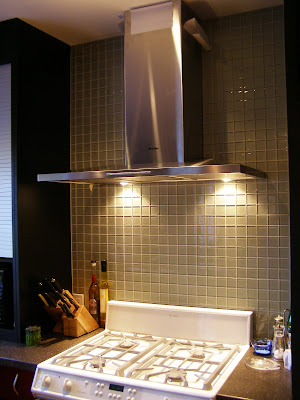 It makes a standalone difference in tying the rest of the kitchen together, pulling out the silver in the backsplash tiles and the aluminum in the tambor cover.

My little baby freezer also arrived today. This was purchased by a friend of my designer in New York City, carried up to Montreal, then freighted to Calgary, where they screwed up the address and sent it back to Montreal, where it was freighted back to Calgary and finally installed today. 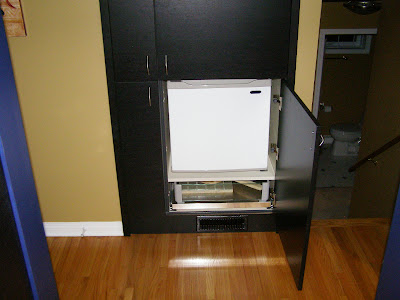 The reason I went to so much trouble to find this is because the smallest freezer available for sale in Canada is 4.2 cu.ft., and that tiny thing is all of 1.3 cu.ft. In the 'States, you can pick up one for about $80. But Haier, the manufacturer of this one, doesn't sell them in Canada, and neither do the other three manufacturers who have them available in the US.

There is still much to do. We're missing the panels for the fridge doors, we're still arguing about the cabinet doors, I have a spare fridge in my garage that they were supposed to dispose of in July, drawer inserts are missing, and we asked them to change the colour on one of the walls to try and make the countertop fit better, among lots of other small stuff. But the hood fan, freezer and light have made me fully functional -- after a mere 21 weeks into a job that was supposed to take 10. 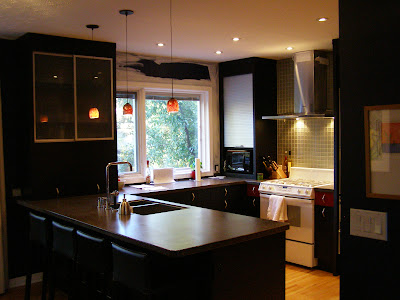