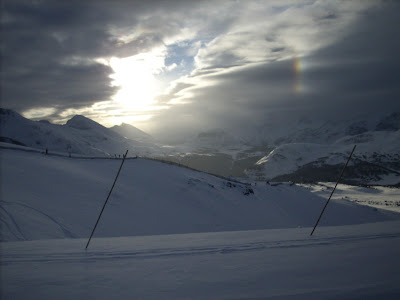 But I nearly froze my fingers off taking that photo, and it meant hiding inside for a warm up at 9:45.

There was no one at Sunshine today. The 11 AM count was 800. You can see how quiet it was in this shot taken from the warm confines of the Chimny Corner Lounge at lunch, where we were one of only about a dozen busy tables. 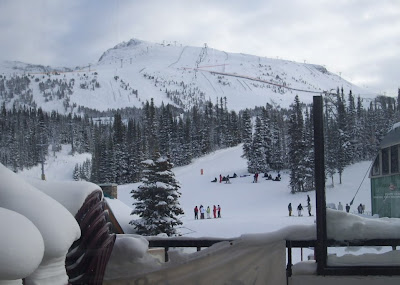 So it stayed -15° most of the day, with some nice sun later in the afternoon. There hasn't been snow in 8 days, but the blow in powder was nice, and what was open was great -- even Goat's Eye. Normally, we start there, but had heard nothing was open, so started up at the village. But our late afternoon runs there were great; there's lots open, basically from Gladerunner across on the lower section below the traverse. The best run of the day was the World Cup Downhill up top; groomed with a beautiful 3-5" of blow in sift that was like skiing silk. This is late in the day from the top of Barner's Bowl. 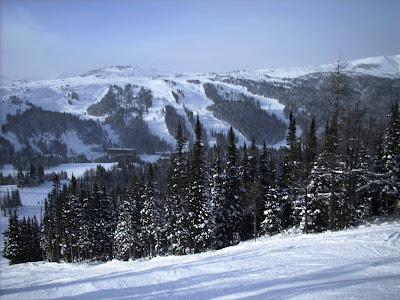 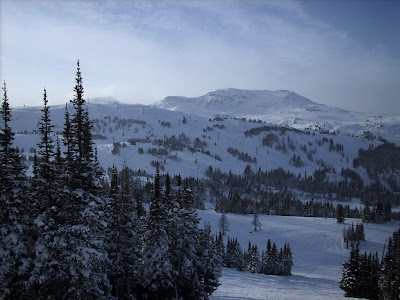 In the end, the vert was low because of the cold, but all in all, it was a nice day, and more people should have been on the hill.
Posted by Derek & Karen at 20:35