A Review of the Sunshine Inn: March 2009

In 27 years of skiing at Sunshine, I had never once stayed at the Sunshine Inn. Two years ago, they renovated the main part of the Inn. in the summer of 2008, they tore down the old wing, and will be rebuilding it in the summer of 2009. KC stayed there about 20 years ago. So it was a new experience for the both of us.

It starts very fun. We pulled up to the hotel check-in in the parking lot area around 7:30 PM on Friday. Hotel guests get to park in the VIP Parking right next to the gondola base. The efficient and helpful staff squirrel away your bags and skis, and normally, your stuff is on the gondola heading up before you are. Now, the gondola stops running at 5:30 PM every night except Friday, and one has to wonder what happens if you arrive after that. Answer: Sunshine Suzy, a tread equipped SUV, that comes down the ski out for you. But they much prefer if you get there in time for the gondola.

These things I learned about the gondola ride up at 7:30 PM:
1) You still need a pass to get on the gondola. I had packed my season's pass away in my luggage. If you can't easily show your pass, they will issue you a hotel guest pass, but you will need to show your ski pass up in the village.
2) It's very dark for the 20 minute ride up. And very quiet.
3) The seats are not heated. This is not a small issue, but actually one of consequence. Sitting still for 20 minutes at -20° should not be taken lightly. Fortunately, we had grabbed our slippers from our suitcase, and we sat on them during the ride up. But we were still underdressed for the ride. I forget that normally I'm well insulated riding the gondola. Jeans do not count as good installation.

Upon arrival in the village, the first thing you notice is the utter silence, except for the sound of the gondola. Nothing is moving, and no one is out. Except tobogganers, and an ever attendant Sunshine staffer keeping an eye on them. Yes, you can toboggan the hill between the Angel and Strawberry chairs just by asking.

I don't know what the Inn was like before the reno, but it's now quite elegant and beautiful. 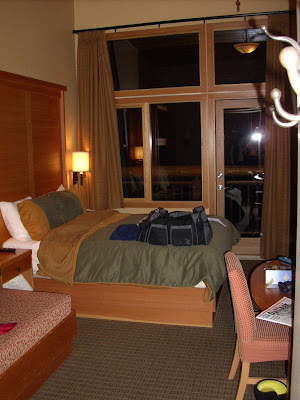 There are currently three kinds of rooms. The Standard rooms are at the back, facing a forest and cliff. Very private. If you're the kind of person who likes to leave your drapes open and strut around in the buff, these are the rooms for you. The Deluxe rooms (where we were) face the ski hill. These are great for watching the Groomers... 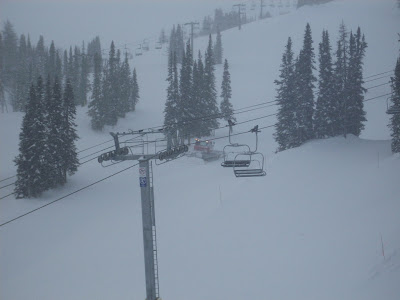 ...checking out what lifts are running, and watching the sun rise. The best rooms (4 per floor) are Suites, all of which feature their own fireplace.

The Standard and Deluxe rooms are big enough, but not large. The bathroom is particularly cramped, and the bathtub is only about half the size of a normal bathtub (but fits two for a shower just fine...). Some things to be aware of:
• The radio reception is atrocious, but every room has a CD player. Bring CDs.
• There is no weather channel on the TV. The one channel you need the most, and they don't have it.
• The amenities are OK, but it's virtually impossible to get the shampoo out of the bottle. It's hard and very difficult to squeeze.
• The water is so hard it will exfoliate you. Lather, it appears, is optional.
• There is no humidity. I thought it was dry in Calgary, but up here, your skin will dry up far worse, so use the moisturizer.
• Water is a pretty precious commodity. This is evidenced by the lack of water pressure in the sink (the shower's fine).
• The rooms are HOT. Our thermostat was set at 10° (the lowest setting) but the heat was still on and the temperature in the room was 24°. We slept with the window open more than a crack in order to be comfortable.
• The Inn is old, and you can hear all hall noises.
• The bed was delightful. Either that or I was tired.

The Inn experience is hard to describe. At 4 PM, the entire hill magically and fairly suddenly just clears out, leaving only Inn guests, Inn staff, and the Sunshine staff that stay up on the hill. That's less than 300 people, and you will be hard pressed to see more than 40 of them. It is unbelievably private and peaceful. I'm use to the hustle and bustle of the Chimney Corner Lounge at lunch when it is packed with 200 or more people. At night, there's probably all of 20 people in the whole space (including staff) and they spread out.

For amenities, the Inn has:
• A small games room, with free pool;
• A family room, with some big stuffed couches and a big screen TV;
• A small health club, with a treadmill (like I haven't had enough exercise), some weights and yoga stuff, where you can book a massage, and
• a dry sauna and outdoor hot tub.

The hot tub is big enough to hold 20, and big enough to develop quite a current if all the jets are pointed in the same direction. It doesn't really have a view; the glass wall gets buried with 5' of snowdrift. So aside from the fact that you are overlooked by the bar, the restaurant, and half the hotel rooms, it feels private. We had the luxury of hot tubbing at -22° in a snowstorm, with the accompanying hair freeze, which is always fun.

The main nighttime activity? Watching the groomer's lights up on the hill, and try to guess which runs he is grooming. Be still my heart...

I was looking forward to eating up on the hill, but worried at the same time because the Chimney Corner Lounge and Eagle's Nest share a kitchen, and I think they are the only two places to eat on the hill at night. That, and I have eaten at the Chimney Corner about a billion times for lunch. Well, yes, some of my fears came true. Some of the lunch menu items are on the dinner menu, too. There's probably too much overlap between the Eagle's Nest and the Chimney Corner in terms of food influences and style. But...

The food at both were great. Friday's dinner in the lounge started with some Asian style Calamari ($12), and I had the special, a bacon wrapped pork tenderloin stuffed with goat cheese. It was delicious and only $24. For Saturday in the Eagle's Nest, I started with Crab Cakes ($14) and again had the special, a Surf & Turf with a large perfectly cooked beef tenderloin topped with 8 big fat shrimp ($40). KC had the saffron risotto ($24), which was easily risotto for 4, which she couldn't finish. The wine list is the same at both, not long but well chosen, with about 15 each white and red, all quite reasonably priced. For instance, on Friday, we had a Jacob's Creek Shiraz for $32. Now, if the bar only carried Bombay Sapphire, the world would have been perfect (Tanquerey 10 isn't worth it, to me). So I could see a guest not getting bored of the food for at least 3 days, but more than that could get repetitive.

One nice thing about the Inn is that it takes virtually no time to get to know the staff. With so few guests, you will see the same wait staff and front desk staff, and they WILL remember you and your name.

One thing that did surprise me was the idea that Inn guests would get "first tracks". Wrong. I stepped out of the Inn at 8:45 on Saturday, and there were already about 200 pairs of skis in the racks in front of the day lodge. Turns out a LOT of folks come up the gondola very early, have breakfast, and do that first tracks thing. It's not busy at 8:45, but you will not be the first ones onto the chairs. So grab an (expensive) latte in the Java Stop in the morning, read the free newspapers, and start your day gently.

And gentle is a theme, because the Inn is an exceptionally peaceful place. There's very little to do, which if you are in the mood can be quite a good thing. Nothing happens fast after 4 PM up in the village. Mad Trappers re-opens from 8 PM to midnight daily. I suspect it's mostly open to give the staff who live on hill something to do other than wreck their accommodations. I don't know if they serve food after 8 PM. We did not go over, being too lazy to put on boots.

And staying at the Sunshine Inn will do that to you. It will disarm you into relaxing by taking away your reasons to be stressed. For a few nights, anyway.
Posted by Derek & Karen at 23:52

We use to stay up at the Inn for my birthday every year until Matt was born. The rooms look alot nicer - it was bit more of a glorified Super 8 before.