Development sliding under the radar screen

The little hamlet of Dead Man's Flats (DMF - population about 60) is off most people's radar screens, but there's some stuff going on that my loyal blog readers may find interesting/concerning.

First off, a while back, there was a swap of lands was proposed between the Government and MD Bighorn involving lands in DMF. The proposed swap placed MD lands into Bow Valley Provincial Park as a wildlife corridor. The red crosshatched lands in the map below are the MD lands going into the park; the yellow lands will also go into the park, but are already provincial lands. However, the lands surround a huge proposed development of 70+ single family homes, a 50 unit condo complex and a 15 lot industrial park to the east of Pigeon Creek. 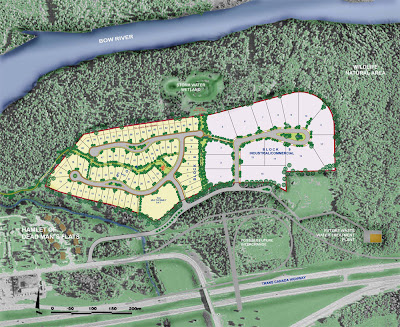 The MD recently held reviews of the Area Redevelopment Plan that proposes (in addition to that development) a total re-design of the DMF hamlet, including lining the highway between Pigeon Creek and the Three Sisters Provincial Campground (including both the Husky station and the Esso) with a "downtown Canmore"-like development of commercial and condo development, including some 300 parking stalls and another 300+ condos. 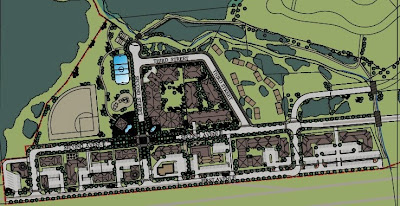 Build out population for the hamlet would be on the order of 1,600. Along with it, and built first, will come a new sewage treatment plant (the old sewage ponds are in the parks land that will be in the wildlife corridor), a drinking water treatment plant, and the oft-discussed regional waste transfer station servicing Banff and Canmore as well as the MD — all abutting the parks land and wildlife corridor, and in fact, immediately adjacent to the G8 Legacy wildlife underpass under the TransCanada.

All this development hinges on finding a water supply. The MD drilled 2 deep wells in 2006 and 2007 looking for water that came up dry. They drilled a 3rd in 2008 and were successful. The only catch is that the well is 45 m from the old garbage dump (affectionately referred to in provincial parlance as the "nuisance grounds"), and you can't drill a drinking water source well within 450 m of a garbage dump without a waiver from Alberta Public Health. Requesting and granting such a waiver requires a public hearing, the first of which was held in March 2010.

Provincial studies presented with the data in the March 2010 hearing show the former dump to be pretty contaminated. Several studies are available that show some pretty nasty stuff in the ground, and that the stuff is migrating UPDIP of the dump. Courtesy of an intervention at the March hearing, the MD went back and regrouped. They contacted Alberta Transportation, owners of the contaminated dump site, and got studies done that describe what it would take to remediate the dump (which has nasty leachates heading to the Bow River, in addition to potentially towards the proposes drinking water well).

A full day hearing is now scheduled for February 1, 2011 with the Alberta Public Health Regional Board in Calgary, to be chaired by Dr. Brent Friesen. In this hearing, the MD of Bighorn plans to propose that they should be able to use the well next to the dump for drinking water until Alberta Transportation cleans up the dump. If the well is approved, that basically clears the way to turn Dead Man's Flats into a 1,600 person town, with a development that looks like a cross between the area around Lawrence Grassi Ridge and Elk Run Industrial Park in Canmore -- all supplied by a single well next to the garbage dump.

One thing I have learned: no water = no development, and the MD is making the argument that if they can't use this well, there's no where else to drill, so no water for the hamlet, which for the MD (who are seriously committed to develop DMF somehow) is a bad outcome. So to me this hearing is pivotal. And it appears as if no one but a small group in Dead Man's will be coming in opposition. And never mind the development; they're the only ones in opposition to drilling a drinking water well next door to a contaminated, leaking garbage dump. Maybe it's because one day they may have to drink the water. Here's hoping Dr. Friesen doesn't think it a good idea. Him I actually trust.

There is an old saying: no single snowflake believes it is responsible for the avalanche, nor raindrop responsible for the flood. This hearing is the snowflake. It is the raindrop. It is the start of a flood of development. Heaven help us if the well draws in the contaminants from 45 m away (as it most assuredly will). It will be Walkerton all over again.
It's amazing to me that stuff like this can be basically done under the radar of folks who care about development in the Kananaskis and the Bow Valley Corridor. Heck, I'd be amazed if it even gets reported in either the Rocky Mountain Outlook or Canmore Leader; rarely does what happen in DMF hit the paper. I don't know if its true, but it sure feels like the MD gets to run roughshod since "only" 60 residents in DMF are directly affected.
The G8 Legacy Underpass connects the Wind Valley with the Bow River. Those of us who hang out in DMF (and who have read the wildlife corridor studies) know it is an underpass well used by bear, numerous cat species, and numerous ungulates and canids.