Diana Krall came to town on Karen's birthday, and since we're both fans, it seemed like a good birthday present. I managed to get front row seats (though fan club seating, which actually worked out quite well except for the fact that the seats were three from the end, so at quite an oblique angle). Now, front row seats have advantages & disadvantages. There was a speaker about two feet away from us. There was another speaker blocking our view of the drummer & bassist. So all we could see of Diana was this: 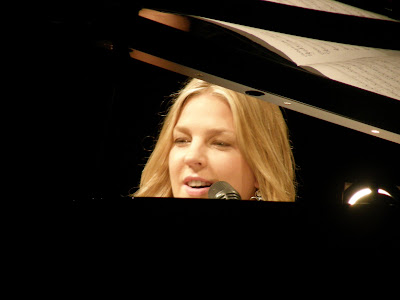 But that's not bad.

The concert was very melancholy, but she did 4 Nat King Cole songs, chatted a lot about Elvis & the kids, told funny stories about playing in a bar in Washington DC and meeting Obama, improvised a wicked version of "You've Got A Friend In Me", and proved that she can play...