The Tent Ridge Horseshoe has been on my list of things to do for a while. Gillean Daffern says:

This is one of the most enjoyable ridgewalks you'll ever do

While I'm sure glad we did it, it's not a walk, folks. It's a hand over fist scramble in places. I quote the following from Wikipedia. This is the actual classification system that brought you the 5.0-5.10 rating system used in climbing:

Class 1: Walking with a low chance of injury.
Class 2: Simple scrambling, with the possibility of occasional use of the hands. Little potential danger is encountered.
Class 3: Scrambling with increased exposure. A rope can be carried but is usually not required. Falls are not always fatal.
Class 4: Simple climbing, with exposure. A rope is often used. Natural protection can be easily found. Falls may well be fatal.
Class 5: Technical free climbing involving rope, belaying, and other protection hardware for safety. Un-roped falls can result in severe injury or death.

Tent Ridge is Class 3 scrambling with sections of Class 4, driven by the difference between scrambling & climbing, and that "fatality of falls" issue.

It starts with a couple of kilometers of trail with more sections of deadfall than open trail. Winding up in cutblocks, it's getting seriously overgrown -- the source of the first of my cuts for the day.

Then you start the scramble, There's a trail-ish, or at least a path. Climbing it takes you straight into the blinding sun, so it's a bit a challenge at times to find the route. The eastern ascent ridge is best seen in this photo from the western ridge. 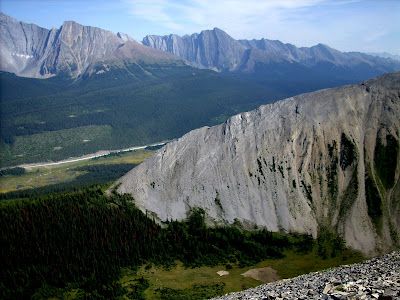 Within the first few minutes you reach the first challenge. Again, Gillean says this:

"Above is the first step. The steepest.... After this, the route unravels beautifully, long grassy promontories alternating with scrambly rock steps"

The second, third, fourth and fifth rock steps are as steep or steeper, and several are Class 4, as the route for the fall goes straight down severely pitched rock avalanche chutes. To give you a flavour of the challenge, here's some shots of KC on her way up. 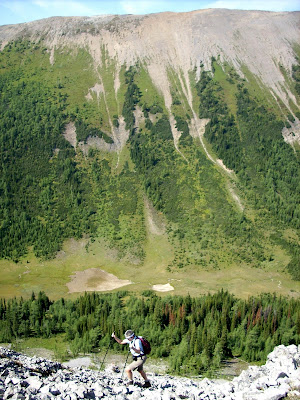 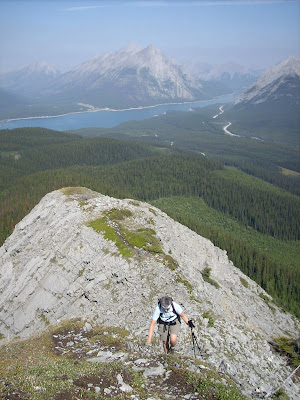 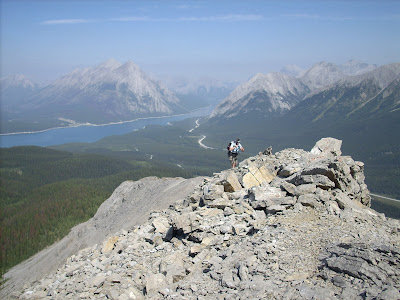 The first summit you reach has a very attractive bright red communications repeater on it. 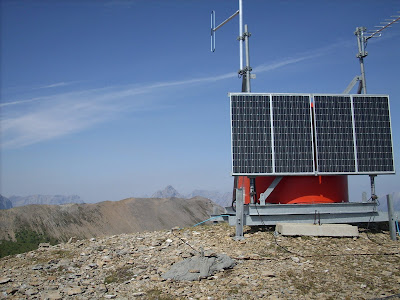 The views from the first peak are pretty fine, to the east of Mt. Engadine, the Tower and Galatea... 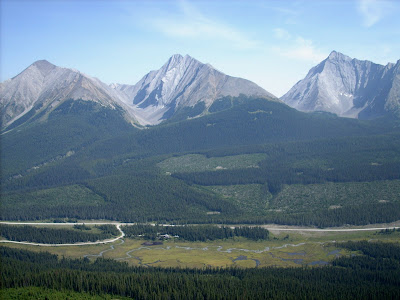 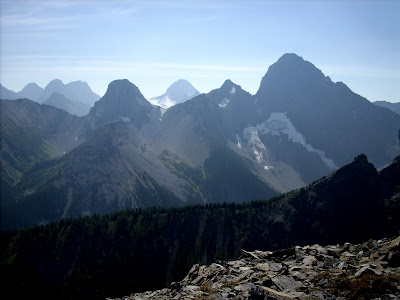 From this first peak, 660 m above the parking lot, you descend 100 m down a mild scree slope to a saddle. The Copelands in their book "Where the Locals Hike" would have you hike the valley straight up to this saddle. Think about that route for a moment. Here's a shot from the saddle. 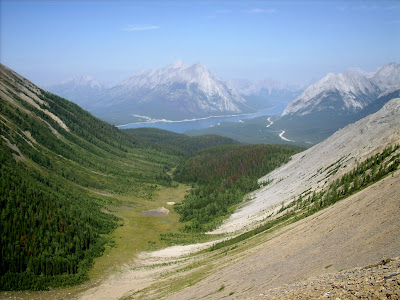 From the saddle you climb another 250 m to the high point of the day. This is steep but non technical. 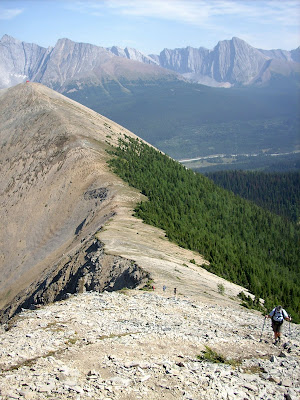 At this point, having climbed 825 m, we sat. We watched two falcons (probably Perigrines) argue with a hawk (probably a Broad Tailed). We watched scramblers tackling The Fist.

And we were joined by Malgosia and Marcin, authors of M&M Hikes. Malgosia shoots fantastic picture, Marcin posts excellent GPS tracks of their hikes (one of which I was following today), and if you like hiking in the mountains, you need to visit their website, MMHikes (a link is also available at the top of my blog). We had a nice chat about the subjective nature of trail reviews. You can be the judge about my subjective reviews.

At this point, though tired, one has to realize that this is about the halfway point, and for a while, it doesn't get easier. Here's the west ridge. 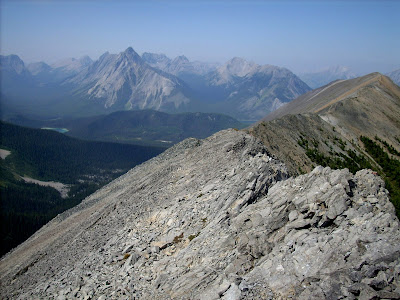 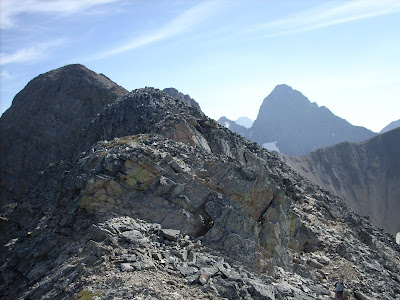 ...and several places where the ridge is a true knife edge, a bootwidth wide and 1,000' down in both directions on unstable sharp scree, and it's not until the last half kilometer or so that the ridge broadens out and gets grassy. The redeeming part are the pretty views of Watridge & Opal Lakes, Cone Mountain, Mt. Assiniboine, Spray Lake (including views up to and including West Wind Pass to Grotto Mountain) and Mt. Nestor, where they are burning out the pine beetles. 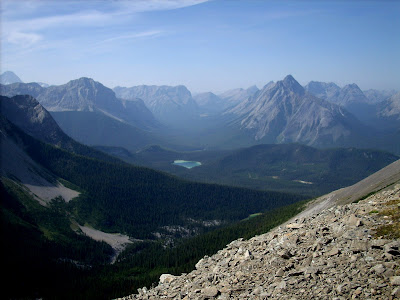 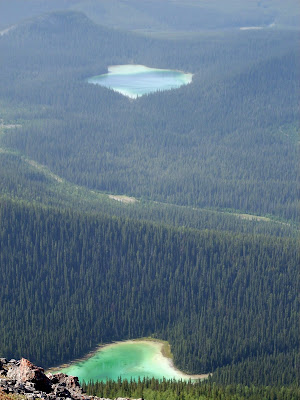 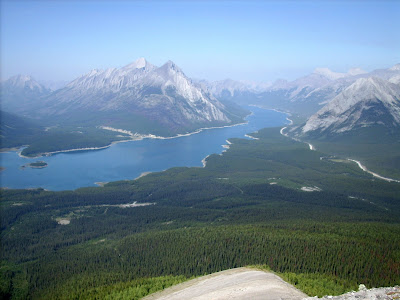 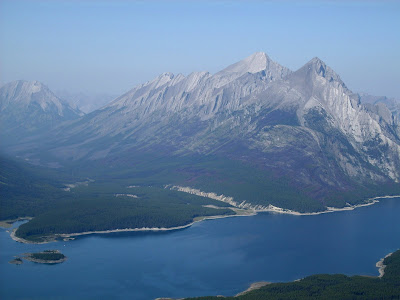 The route down from the end is just that: down. First, one heads straight down a steep face on slippery gravel. Then comes a hard right turn to cut diagonally down along below the face of the peak to a junction with a well worn trail heading across the face -- neither direction of which is actually the correct route. We tried following the GPS track, but couldn't figure it out as my useless GPS was "lost" and couldn't tell me where I was. The topo map wasn't much help, and Gillean's book was unclear ("it helps to be familiar with the regular route up Tent Ridge"). We cut north about 50 m from the trail intersection, and found a weak trail made by humans heading down, and followed it down the slope. It petered out, then in another 20 m and slightly to the right, we found another weak start of a trail that turned out to be the correct one, but amazingly did not match the GPS track. The led us right back to the car without any difficulty at all, and was actually a pretty good trail if very steep in some sections of the forest. I think they call it Gawby Gultch, but then again, who knows?

So are we glad we did this? Yes. But if you're considering it, understand the following: Hands are required. Falling would have dire consequences. There is exposure, and while not on a purely vertical cliff face, certainly on something where the steepness is severe. Routefinding at the start, in spots on the up and downclimb, and on the exit is quite challenging; a good GPS (not my piece of junk) and a good track to follow (say, one downloaded from MMHikes) verges on essential. Do it clockwise as recommended in Gillean's book, as counterclockwise would put the nastiest pitches into bad down-climbing territory.

Having done it now, I would not call Tent Ridge "one of the most enjoyable ridgewalks I've ever done". Quartz Ridge at Sunshine Meadows is far superior.