Red Ridge: Yet another missing trail

I have always held high hopes for the Red Ridge trail, as it's an area of the Spray Valley I love. We drooled over the idea of getting up on the ridge when we saw it from below on the Sparrowhawk Tarns hike.

We were sadly disappointed, for the most part.

The biggest problem is there really is no trail, virtually right from the start. A very weak trail leaves the Spray Lakes day use area and is glued to the cliff edge on the left bank of the creek for it's length. Here's an example of how weak the trail is. It's on the left. 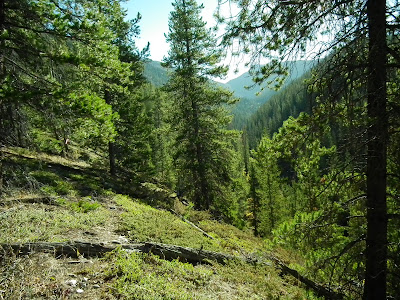 The trail is so awful and hugs cliff edges so much that in many cases it's actually easier to bush bash in the forest parallel to the trail and creek.

The creek is never straight, and the ground is continually rising, so this isn't very helpful. The GemTrek map has the route marked, and so when we got to the grid reference where the trail was supposed to "strike off" (for a change my GPS was actually giving me good data), we started the first of our 4 "uphill" forays trying to find something that would lead us up the hill. Gillean says

"high up, interstect a game trail that gains the ridge at GR194429. Too far to the right and you hit a boulder slope"

We wasted 90 minutes rooting around for game trails, achieving nothing. We did a bunch of bush bashing, contouring the hillside at the 1850 m level (where the GemTrek map had the trail starting), and 1950 m hoping to run across something, to no avail. We were on the verge of giving up when we found the edge of the boulder field, and near it, a very weak trail-like thing that had obvious human presence (hiking pole holes and the odd boot print) and actually led uphill (note: As I have mentioned in the past, game trails tend to lead across slopes, not up them).

This trail lasted about 300 m and gained 200 vertical metres before dying out. My GPS said we were 200 m below and less than 500 m from the target grid reference, so we just started bush bashing up. We found the odd trail, but nothing lasted for more than 50-100 m till we were on our own again in dense bush (I have scars on my face, arms and legs to prove how dense it was, too) and a steep slope.

Here's a snapshot from Google Earth of our tracks, both up and down. The two deviations to the left into the trees are real and are our attempts at crosscutting the hill to look for trails. The wandering around on the left side of the creek before the final push uphill are also real, also time wasted looking for trails. All the junk on the right side of the creek is not real, just artifacts from my GPS. 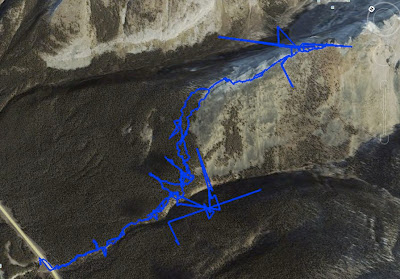 Anyway, finally the grade leveled, the forest thinned and we popped out at the base of one whole lot of scree. Note the larches on the right. They were an important landmark, it turned out. 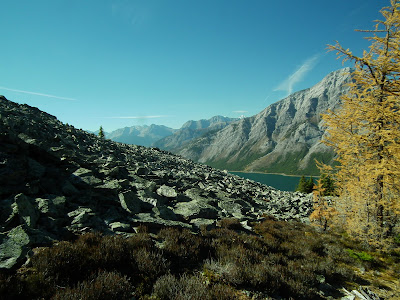 I'm not sure I would use the phrase "easily angled". The were tough to clamber on, and hiking poles were essential for balance. Here's KC struggling up. 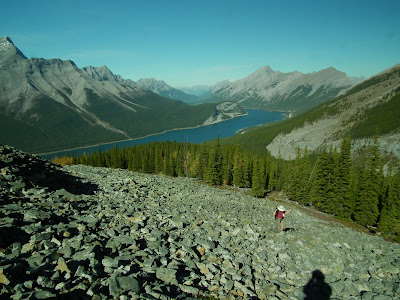 The first minor pitch of 30 vertical meters gets to a tree patch, then there's still 100 vertical meters of this stuff to cross. The larches in the centre right are where we popped out of the forest. 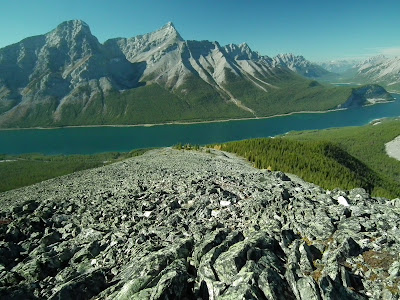 Next comes a grass and spruce section.

This section is steep but manageable, and offers some pretty stellar views towards Mt. Buller & down Spray Lakes, of Mt. Assiniboine & Mt Sparrowhawk and Read's Tower. 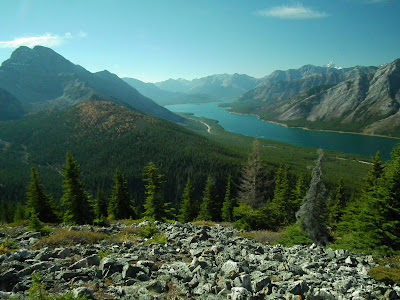 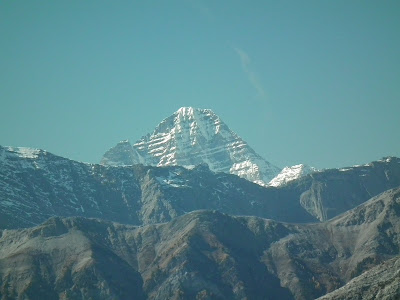 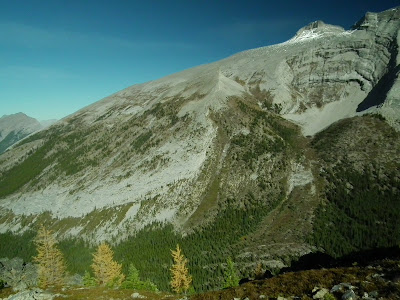 At this point, a bit of a trail actually forms. This is because you're naturally drifting to the left as the slope to the right is steeper. The trick is there's a cliff on the left. So people appear to get trapped against the cliff edge and follow it. And when I say cliff, I'm talking easily a 300 m drop, and in many places, you can look 1,000' straight down the gullies. 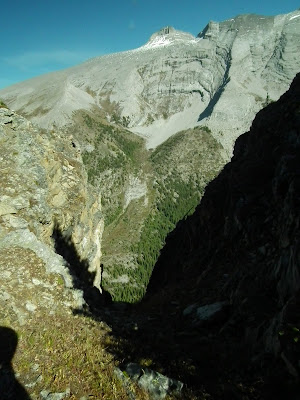 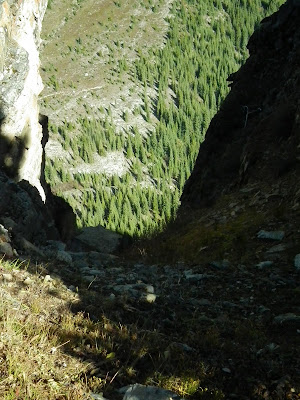 After this "spruce and grass" section which as some spruce but very little grass, offers a

according to Gillian. This is what you're supposed to climb: 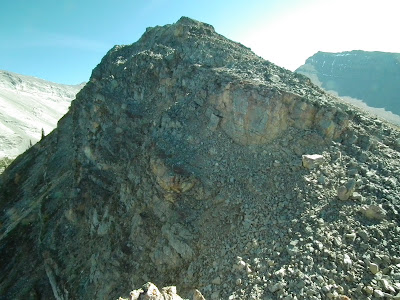 and this is where you're supposed to climb it. 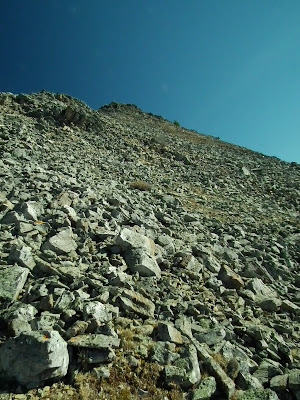 Well, by this time we had climbed 680 m and still had over 300 m to go, and it was already 2 PM, late not due to our start time but due to wasting an hour or more attempting to find the trail up. So we stopped here. Not a bad place to stop, but not quite the objective. How "not quite"? Well, here's Red Ridge on the left (with Mt. Bogart in the background on the right) taken from the Spray Lakes dam. See the bright V shaped notch in the middle? That's as far as we got. 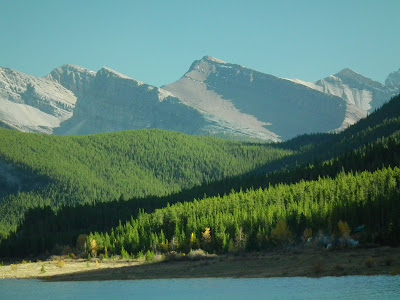 Still, not a bad spot and reminiscent of the notch below Read's Tower. Certainly pretty views, including the basin behind Read's Tower and below Mt Sparrowhawk where we were about this time last year... 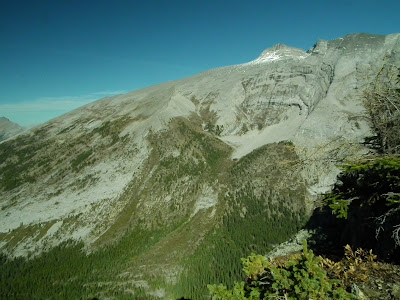 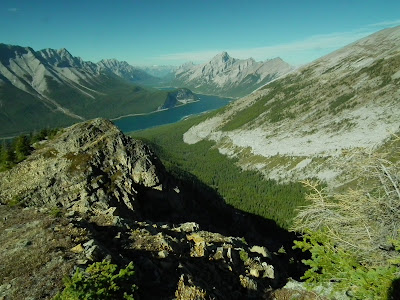 ...into the Sparrowhawk Tarns basin (note: when we hiking into the basin a few weeks ago, we had lunch in the prominent rock in the left centre)... 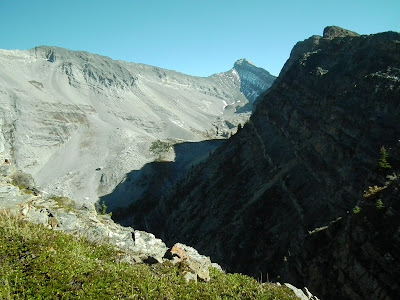 ...and the toe of the rock glacier under the flank of Mt. Buller. 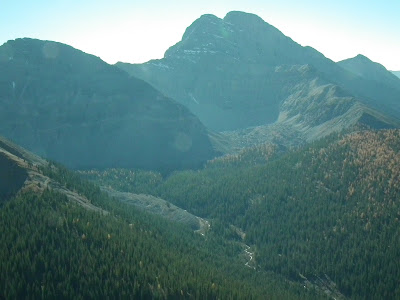 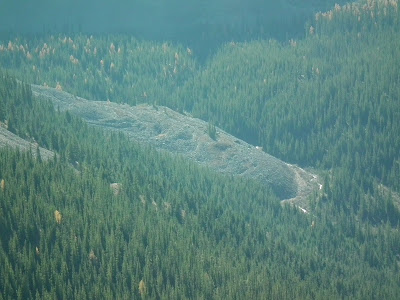 We also saw 3 hikers down hiking the Sparrowhawk Tarns. Sadly, it looks to me like they only made it to the rockfall and didn't make it into the basin itself, which is tragic. The three hikers in the second photo are actually in the first picture, in the lower centre. 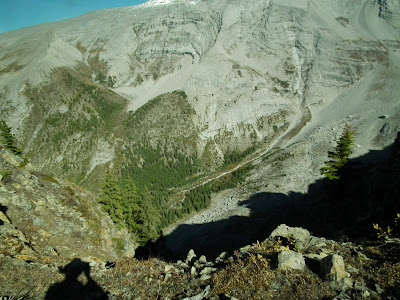 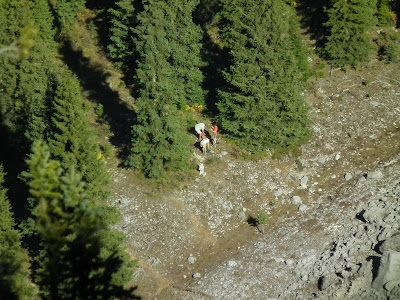 My camera really has a cool lens.

On the way down, we decided to look for a cairn or something where the scree slope met the forest that might indicate an actual trail back into the forest. From the GPS track above, you can see that we continued down on the edge of the scree a fair ways, occasionally seeing bootprints, but finding no kind of trail at all. We finally just started down into the bush, occasionally intersecting our track up, taking whatever short lived game trails we could find, and eventually made our way back to the creek, scratched and cut once again.

Several times on the way up and down we found bear poop, all of it bright red and full of berries. This pile was just off the trail right back at the road. 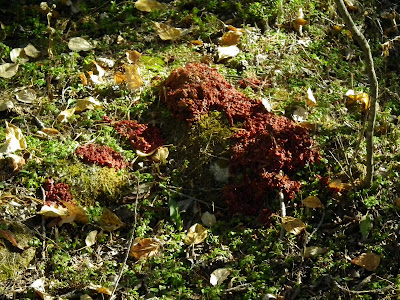 We talked to some folks who had gone for a walk into the closed Spray Lakes picnic area. They reported seeing numerous piles of fresh bear poop, too.

I won't be in a hurry to do Red Ridge again. The bush bashing sucks. The "trail" sucks. Clambering the scree up top sucks. If you want these views, do the Read's Tower circuit; while difficult, it's way more rewarding than this.