We are in basketball season, and KC and I hate to miss our Dinos. Going into this weekend, our girls were ranked 12th in the country, and the men 4th, and we were playing our arch-enemies, the University of Alberta. So with games on both Friday & Saturday night that we did not want to miss, we stayed in town Saturday, and did not ski. We stayed to watch the games.

We lost. Mostly. The men had a blowout win on Friday (80-54). But that was it. My girls tragically lost both games. My guys lost on Saturday (82-80). After the games, we headed out to the West Wing.

And in the process, missed another powder day. Sunshine had 30 cm on Friday, and Saturday was apparently great for 4 reasons. First, there was the snow. Second, the crowd was low (reports of not-filled parking lots and 3,900 people). Third, it was sunny most of the day. And fourth, it was Robert F. Kennedy Jr.'s annual Waterkeeper's Alliance Fundraiser, and Banff was full of celebs, including James Gandolfini, Kelsey Grammer, Alec Baldwin, Marcia Gay Harden, William Shatner, Natasha Beddingfield, Kevin Lowe, George Stroumboulopoulos, and a bunch of Trudeaus.

We saw none of them. They all went home Sunday. It was an OK day. The hardpack of last weekend is gone, replaced by soft turns basically everywhere (though the obvious and constant wind scoured and high traffic areas like the top of Red 90 remain), and the rocks are also basically gone. Anything in the trees got wind loaded, so there were still plenty of near fresh tracks in glades especially on Goat's Eye. Here's a couple of shots of KC taking breaks in the Gold Scapegoat trees. 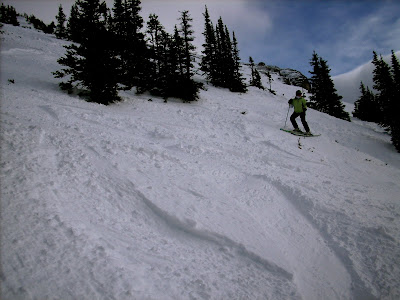 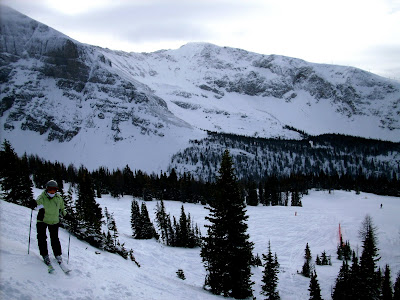 The viz was on and off, especially on the Divide side, with pretty flat light... 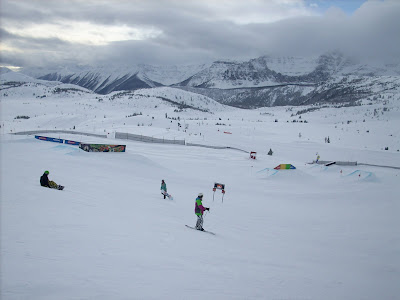 ...and things and got decidedly worse in the afternoon when the top of Divide socked in down to below the top of Angel. We were there for a while till it turned ultra foggy. As usual, only the very top of Goat's Eye was affected. 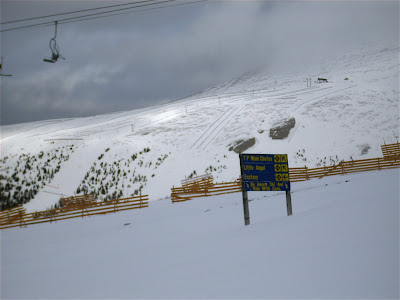 Temps were good at -11° in the AM and -3° in the PM, but the wind was gusting and it felt much colder. A moderate crowd today and no lineups anywhere except Wawa and Wolverine; exactly 7 cars parked past the gate.
Posted by Derek & Karen at 18:52