Sunshine reported 7 cm overnight and 14 cm in 2 days, and we had pretty good expectations, but the amount of fresh snow was a function of where you were. On Goat's Eye, there was probably only 5 cm fresh overnight, and another 5 the previous day. Still, some of our favourite conditions are fresh snow on groomed stuff, and we found that on Scapegoat and even Gladerunner, which we did from top to bottom. 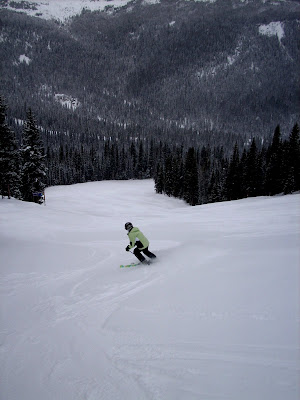 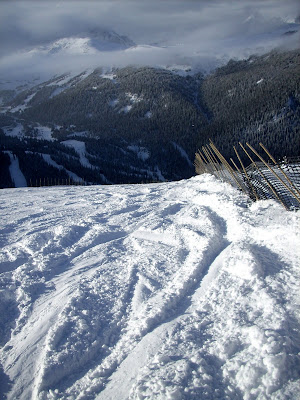 We also had fun in the Goat Chicken Glades. It always impresses KC that she can ski this type of stuff (big moguls in the trees). 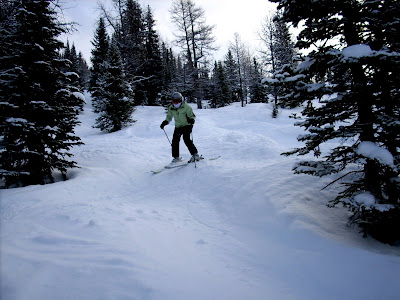 But the deepest snow we found was in the Paris Basin where it was easily boot top to knee deep (pardon the gloved finger in front of the lens). 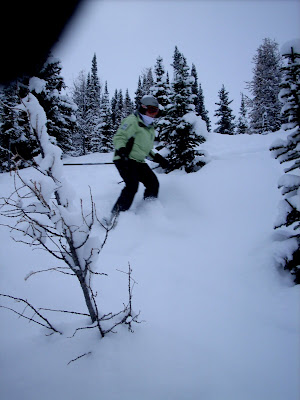 However, in the AM, on a run down Gladerunner, suddenly my pole felt funny. About 15 cm of it had snapped off, including the basket. So the first problem was doing a mogul run without poles (at one point, I planted and the pole sank almost to the grip). The second was getting a replacement. Did you know it costs $9 a day to rent a $25 pole? Highway robbery. I know where there's one sitting in a tree, too.

The temp was fine, at -8° to start the day and -4° in mid afternoon. The morning was actually fairly good light with splashes of sun, though the top of Divide looked socked in. But the clouds got thicker in the PM, and the viz deteriorated. By 1:30, even the top of Standish was a white out, and the wind picked up, too, making it kinda chilly. The afternoon saw light snow everywhere, though as usual, the viz was better and snow lighter on the Goat's Eye side. 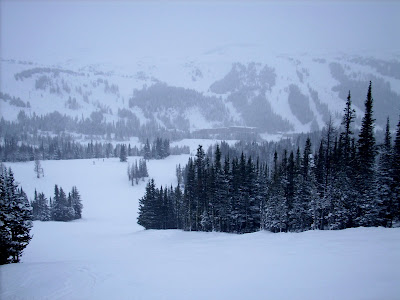 What was strange was our inability to find the crowd that was there. Cars were 0.5 km past the gate, but we rarely ran into lift lines. No one was skiing Divide's fog in the afternoon, and all the village chair lines were short or nonexistent. I thought everyone would be over at the Goat for the better viz, but while it was busy, no lines there, either. Go figure.

However, the lousy viz and the frequent big wind caused us to bail early. We were on our way out and noticed the good viz on Goat's Eye, so grabbed a couple of runs, but found it too busy for our tastes. We admit it. We're spoiled, and season's passes will do that to you.

PS: We spent the day singing "Another Happy New Year" by Spirit of the West". If you don't have the track, get it.
Posted by Derek & Karen at 19:15