Four times this weekend we had bear encounters.

Yesterday, on our way down to Troll Falls, we saw the Fish & Wildlife officers wheel in with lights flashing to the Widowmaker Day Use area. One leapt out of his truck with a Karelian Bear Dog, and dashed off into the woods. On our way back from the hike several hours later, that same F&O guy was parked with lights flashing at the Barrier Lake Day Use Area keeping an eye on Mr. Bruin, who appeared to have wandered a few kilometers down the road during the day.

Today, there was a grizzly bear warning for the Num Ti Jah lodge area, but we didn't see that one. We did, however, pass a bear jam on Hwy 93 a few kilometers south of Num Ti Jah Lodge. There was a medium sized black bear feeding on the side of the road with a dozen or so cars on the road watching him and taking pictures. On the way home, this Mr. Bear had only moved a kilometer along the road, and was gorging himself on a tree, of all things. 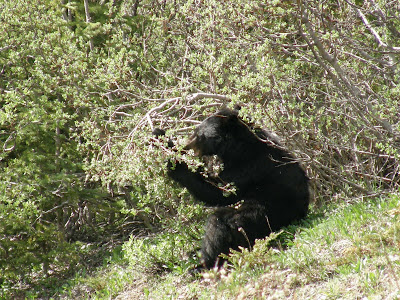 I have never seen a bear eat a tree before. Wonder what kind of tree it was.
Posted by Derek & Karen at 00:13