We were having dinner on Friday night and hear what sounded like several gunshots nearby. There being a firing range about 2 km up the road, it didn't surprise us, but it did seem louder than normal. Turns out it was Fish & Wildlife folks scaring away a grizzly from behind our condo complex. Not knowing this, we went out for a walk in the exact same area about an hour later. We didn't see the bear, but we did see a rather handsome white tailed buck with fuzzy early antlers. 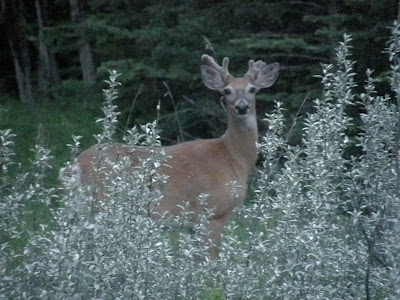 Our neighbours told us there have been bears in Dead Man's almost every day for the past week. Apparently, food up high is a little scarce due to lingering snow, so they are coming down to forage young plants in the valley.
Posted by Derek & Karen at 23:46