The ski year in review

Before I dive into the Europe trip, I wanted to look back at the year in skiing. 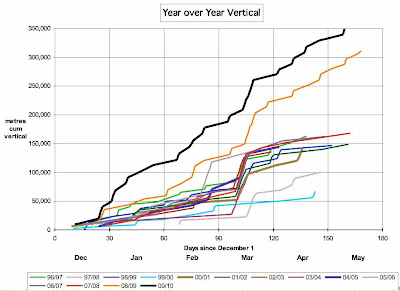 Was this due to the snow? Most definitely not. This was a lousy snow year, as the snow pillow data shows: 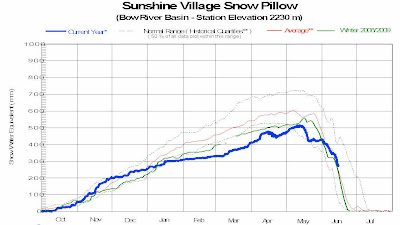 The chart says the season got off to quite the bang with heavy snows in November. Late December was bitterly cold in Calgary but fine in the mountains, and in fact I recorded a spring day on December 26th. We then had steady but small snowfalls through until mid January, and then it wend dry for 8 weeks, with no consequential snow from mid-January to mid-March. In fact, Sunshine came out of their drought when we went to Big White. After March came variable weather. There was a big dump in early April, immediately followed by hot spring weather, followed by more winter and snow, followed by spring, then followed by winter snow.

This resulted in the best days of the year for us being April 10th, with the second best day April 25th. Both days featured blue skies and scads of powder. But uniquely, the worst day of the year was in between the two -- April 11th. The worst day was the day after the best. Skiing is like that. Another awful day was the day they let the Zamboni come out at Big White on March 17th.

On my lonesome, I managed 12,240 m (40,158 vertical feet) on January 12th, despite crappy weather and it being avalanche awareness day -- the 4th highest day I have ever had in 14 years of tracking stats.

Just imagine what we could have done with better snow...