Ski Day 7: Chilly in the Powder

This is how the day started. 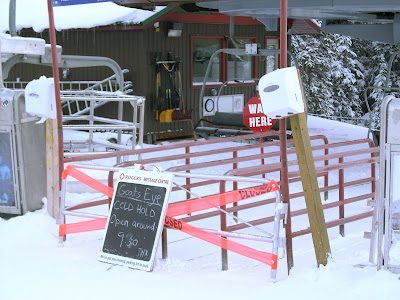 Observant viewers will see that the clock in the background reads 9:50 AM. I got to Goat's Eye at 9:10, only to find the lift down. I skied down to Wolverine only to find it down, too. The gondola was pack, so uploading was a bit of a problem. And it was a balmy -27° to boot. So me and about 30 other people were trapped at Goat's Eye Gardens until about 9:50 when Wolverine started (Goat's Eye started about 10:10). Ah well. So I skied a reverse day, spending the morning on Divide and the afternoon at Goat's Eye. Given that I lost that hour, I was surprised I got in 9,905 m - but then again, I was solo today as KC was working.

The morning may have been cold but it sure was pretty blue sky. 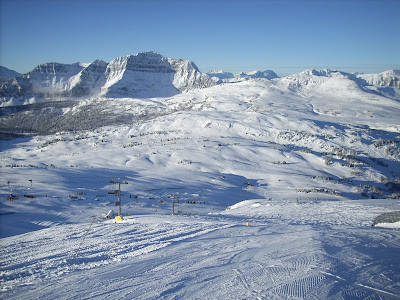 The 20+ cm we got this week was obvious, though most everything was pretty tracked out. I say "most everything" because I certainly found some really nice stuff in Bye Bye Bowl. 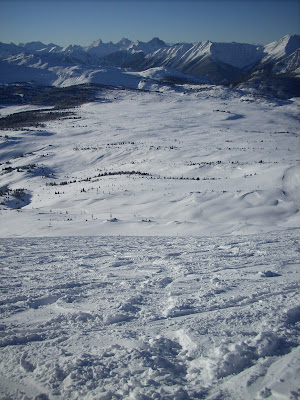 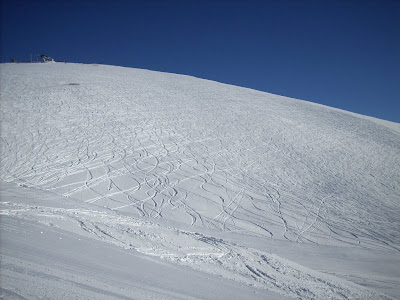 Several of the tracks below the snow fence on the right (including some of the pretty S shaped ones) are mine. I turned laps there and over by the fenceline on the extreme left pretty much by myself for the morning. I also had fun in the powder skiers left of Assiniboine Flats. The really nice part was the combination of sunshine and zero wind meant it actually felt warm (-5° ish) back there instead of the -17° that the thermometer showed at Divide Base.

Just before lunch, a cloud deck appeared out of nowhere. By 1:30 I was over on Goat's Eye, and the overcast was settling in, making the light flat and the viz poor. 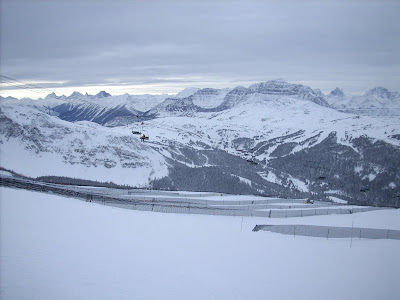 The snow has helped, but it has helped Goat's Eye the least. Nothing new has opened up top, and it looks like it won't for a bit yet. The steep pitch of Rolling Thunder is still nasty with hazards, and Silver Scapegoat is still hazardous, too. The entire section of Silver Gladerunner is full of obstacles, though I found the Goat Chicken/Sucker glades OK (there's just no reasonable way out). The best stuff I found was on Wildfire and Bronze Scapegoat, where the coverage is fantastic and the snow beautifully carveable.
Posted by Derek & Karen at 17:20