A while back, I posted a review of the Sunshine Inn. But I have never commented specifically on where to eat at Sunshine. There are 9 places to eat that I know of. From top to bottom:

The Eagle's Next Dining Room in the Inn has always puzzled me. I think it's open for lunch, but I think it also has the same menu as the Chimney Corner Lounge, and in that context, seems to act as an overflow area for the Lounge, rather than the other way around. I wish you could make reservations here; they are certainly set up for it. It's also fairly easy to get into, and rarely has a line - if you know that the way to access it is to come into the Inn, turn left at the front desk, then go upstairs or take the elevator to the entrance.

The Chimney Corner Lounge is one of my favourite places to eat on the hill. The food is excellent, the greenhouse like terrace area has great views, if you're inside the fireplaces are nice, and the service is normally very good and fairly fast. They have a daily soup and sandwich special that is pretty good and makes for a nice change from the menu for us regulars who eat there a lot. However, it's popular, and line ups are common if you insist on eating at 12:00. We therefore try to avoid arriving before 12:45.

The Java Stop in the Inn is little known. It's downside is that it's not very big. But it serves pretty good pre-packaged sandwiches at a self serve counter that makes for a very fast lunch stop indeed.

A lot of people seem to like Mad Trappers. I'm not one of them. I only eat there once or twice a year, and usually because the Chimney Corner is full with a long lineup. Trappers is always crowded, though it's bigger than it looks. I find the food one of the weakest of anywhere on the hill. They claim to slow BBQ chicken and pulled pork; I do both of those, and mine is so much better than theirs it's silly. The service is normally OK to good.

The Burger Stop in the ground floor of the daylodge is a self serve burger bar. Basic if expensive stuff, and almost always a crowded zoo.

I never go to the cafeteria on the main floor of the daylodge. Ever. It's elbow to elbow packed, the tables and chairs uncomfortable, the food expensive cafeteria fare ($30 for a bad pizza?).

Once every few years (like this past week) I go to the Lookout in the top of the daylodge. Every time I go, I regret it. The buffet is good, though I find it too much for me for lunch, and is probably good value at $18.95 if you are starved. Eating the buffet would solve the biggest problem of the Lookout: painfully slow service. Dining a la carte takes a solid hour. The sliders are tasty but come with nothing but the 3 little burgers (you can buy a bowl of sweet potato fries that's the size of an oil drum). The service is so slow the food frequently comes out cold. Avoid the place unless you're doing the buffet, and even then, expect your drink order to be delivered half way though your meal.

I've never though of a collection of Atco trailers as a "garden", but that's what Goat's Eye's eatery is. Atmosphere? No. But I would come here before I would eat at the Cafeteria in the Daylodge. It has your basic short order stuff, but there are some real food options, too, like fruit and salads. The chili's pretty good. And you can get a discount on food with a Sunshine Card or Pass (but not at the lunch rush).

I have always liked the Creekside down at the parking lot, and it's even better since it's been renovated. The food is probably the best on the hill. The service has always been good and fast. They give discounts to SSV Card and Passholders. And you can always get in without a lineup, even on the busiest days. Today, for instance, saw cars parked 3.2 km down the road past the gate, and yet here's what it looked like at 12:20 pm: 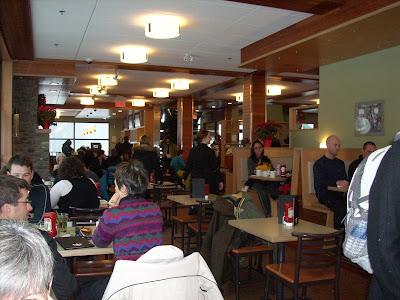 Yes, lots of empty tables. Yes, you have to take the ski out to get there, but the ski out is actually quite fun when there's no one on it and it is not the Deerfoot Trail. If you're already at Goat's Eye, the Creekside is just 8 minutes ski away; you can't even get to the village that fast.

So we mostly eat at the Chimney Corner or the Creekside, with the occasional excursion to Trappers.

In the end, the biggest complaint I have with it all is that there's too much similarity between the menus at all the places. The Creekside is supposed to be "southwestern", but it's not at all. Trappers is supposed to be a BBQ place, and it isn't. All the restaurants serve the same things (right down to the same buns for the burgers), and for us regulars, it really gets monotonous.
Posted by Derek & Karen at 15:42