Once you get to a certain advanced point in skiing, it becomes hard to progress that next step. For some, lessons just don't cut it, for you need to acquire some very specific skill or other that requires personal coaching. So at that point, a lot of people gain their instructor's certification. It was the same way when I was a glider pilot. First you learned, then you flew solo, then you flew cross country, then you flew higher performance aircraft, then you learned to teach.

Karen decided recently that she had reached "that point", so she signed up for the Canadian Ski Instructor's Alliance Level 1 course. I got my Level 1 way back in the late 1970's. Level 1 instructors teach beginners how to snowplow and progress to an intermediate level of skiing, primarily to kids. It's not really advanced skiing, but the course teaches you how to ski a technique "perfectly" and how to plan and deliver classes. And one key to the course is the absolute requirement that your skiing improves. Because it's Level 1, you really don't have to be that incredible a skier to take the course, but no matter how good you are, you MUST get better.

She passed, of course, and the limited opportunities I've seen say she's skiing better to boot. So I am (as usual) proud of her for getting it done. Will she teach? I doubt it, because that seems like work. But it wasn't about trying to get a job as a ski instructor. It was about setting and achieving goals.

While she was in the class, I was skiing on my own. A few weeks back, I posted this on how I managed to ski a 3rd best ski day ever, by setting a goal to ski a lot one day. At the end of that day, I wondered if I would ever get the chance to break 50,000' again.

Well, I did, and then some. This past Monday featured fast snow, fairly good viz all day, some powder and a bit of hero snow around. As Karen was in class, I was on my own, with no reason (but wobbly legs) to stop during the day. On the downside, I have been (and continue to be) fighting a cold, so wasn't feeling 100%. But circumstances on the hill caused me to ride the Goat's Eye lift -- with it's 1,900' of vertical -- exclusively for the day. Karen's early start for her class got me onto the chair at 9:05 AM, and her late finish caused me to catch the last lift at 4:00 PM. Add to that the briefest of lunch stops and I managed to get...

And lest you think I took it easy this day, simply blasting up and down green runs, or doing hard stuff early and easy stuff later...
...that's one in Mother in Law, one in Goat's Head Soup, one in Wildside Main, one in Farside, one in Think Again, two in Renegade, one in Stampede, one in Saddledome and one exit through Eagle Meadows. All but 2 of those are double black, and one was my 26th run of the day.

Sometimes, you get to be in the right place in the right time. This dude in my neighbourhood was, last Friday. He caught a lynx and her cub on camera.

The Hobbit: An Unexpected Disappointment

I have never been one to go to very many movies, and it's harder where I live now. We have one 4 screen theatre, and they rotate movies weekly. A really popular movie will last 2 weeks. By the time I figure out something's on that I want to see, it's gone.

I liked the LORD OF THE RINGS series, so I wanted to see THE HOBBIT. It's in town on a rare 3rd week of showing, but I guarantee it will be gone this week. So I caught it before it disappeared. 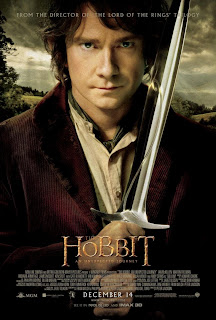 For LOTR, I though Peter Jackson did an amazing job of condensing the books into their essence. He kept the story moving. He made the characters engaging. His special effects augmented the story, not dominated it. He took three long books and made 3 long movies.

Jackson took one short book and is making 3 long movies. He padded the beginning of the movie with stuff to tie it to LOTR, including an appearance by Frodo. He padded pretty much every scene with junk not in the books and not really true to the story. Examples:


Jackson spent $180 MM mostly making silly battle sequences. Is it me, or:
I could go on; my list of complaints is nearly endless. In THE HOBBIT, Jackson covered 6 chapters and 107 pages of the 279 page book. Each of the LOTR volumes is over 400 pages, and took only one movie. I guess he had to pad in order to make his billions. THE HOBBIT has been out about 4 weeks and has already made $850 MM. No wonder they're making a trilogy.

I've read that Jackson is a stickler for Tolkein details, and has merged stuff into THE HOBBIT from books like THE SILMARILLION and the appendices to the LOTR. For instance, Saruman is there because he actually turned evil already and wants the ring.

Horse hockey. Let him go make a prequel to LOTR. He should have left the book -- an excellent book, a wonderful story -- alone.
Posted by RyderDA at 18:58 1 comment:

Why we read newspapers

A while ago I posted a rant about newspapers and how I miss them. I saw this on YouTube today, and it explains it better.