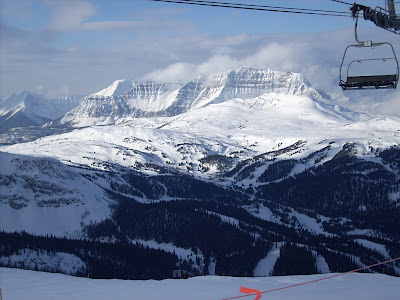 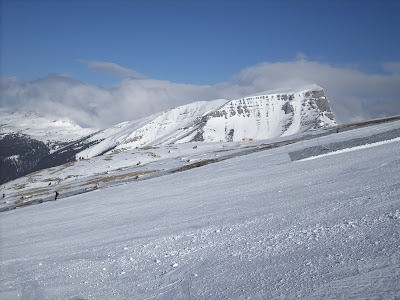 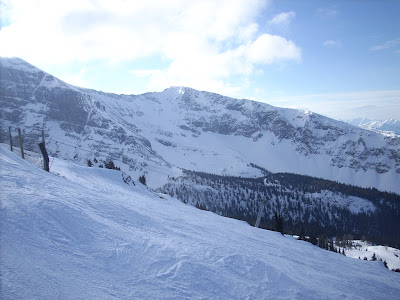 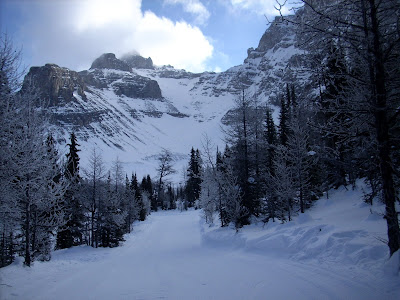 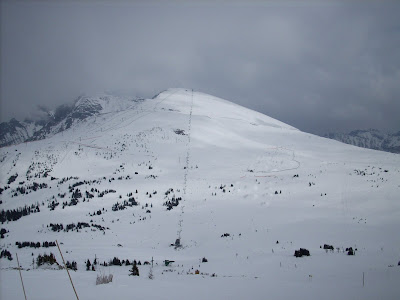 We had a total lunar eclipse last night, on a perfectly clear and cold night. Totality lasted over an hour. Here's a bunch of photos as we approached totality. 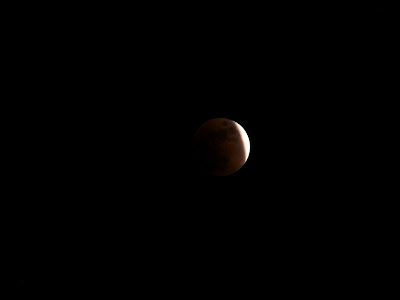 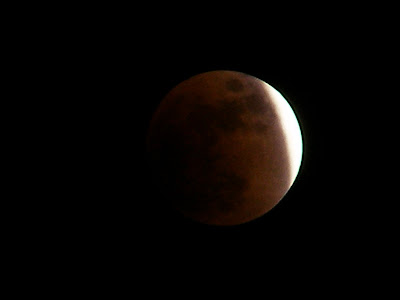 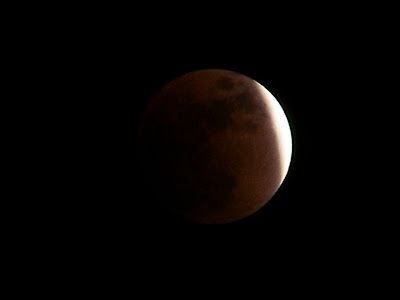 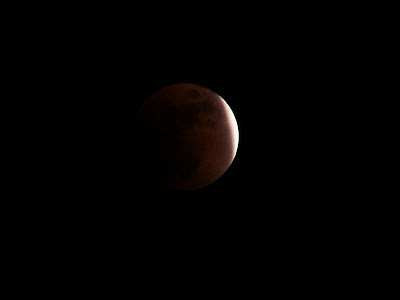 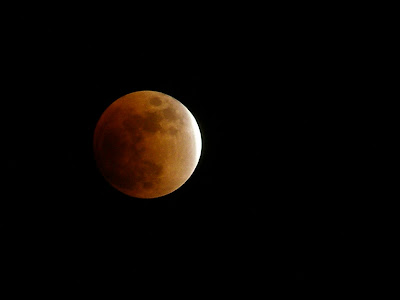 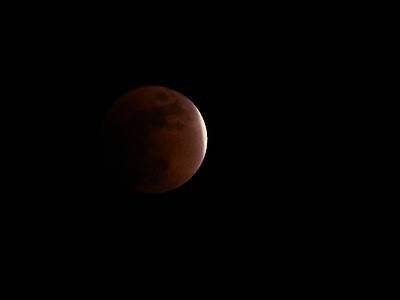 They're still heros to me

I had great hopes for this weekend. My girls -- the Dinos Women's Basketball team -- were 6th ranked going into the first round of playoffs. Our 15-7 record was up against Saskatchewan's 9-13 record. I was more worried about how we were going to fare against the Alberta Pandas, who had a 16-6 record and had beaten us in 3 of 4 match ups.

But last weekend's results worried me. We were in Saskatchewan, and split the weekend, with the game we won very tight. It looked from the box score and the write up that Saskatchewan had figured something out, since some of our best players -- Ashley Hill and Courtney Coyle, in particular -- were held to sub-average scores. Still, sometimes Ash is streaky, I told myself. We'll do fine once we got home.

Except we didn't. Friday night's game started badly and never got better. Sure, Ashley wasn't shooting al that well. But she wasn't getting many chances either. Saskatchewan's defense basically shut down Ash, Courtney, Whitney and Michelle on Friday, and with no offense, we lost a low scoring match. Jane Meadwell was a highlight, as it seemed as if the Husky's just weren't focusing on her. Our defense was OK, though I personally thought our man-on-man was working better than the zone, and we spent most of the game in zone. Still, that was Friday, and we just needed to shake it off and make it work Saturday.

But it never did. Saturday was the same game as Friday, only with more intensity from both sides. Willy managed to get free more often and rebounded better, scoring 20, and Megan Lang stepped up as the only outside shooter, grabbing 16. But a lot of stuff didn't work. Juliette was struggling on point guard, and had too many turnovers and bad passes (I hope one day she learns that hail mary bombs rarely work for her). We also had too many places where the 10 second shot clock countdown meant a mess instead of a well executed clutch play. We managed to force the game to overtime, and had 4 straight possessions mucked up with turnovers and low percentage shots. They scored 10 in overtime, we scored 5. Game over. Season over.

We didn't play like the 6th best team in the nation, and we didn't play our game, the way we could play it. Give some credit to Saskatchewan for getting in our way, but I think that our job is to figure your way around that, and we never did. Saskatchewan played better than they had all year, and despite a lack of a single great player to lead them on, had multiple shooters in the 15-20 point range. The right team got to advance. No wonder Whitney was crying as soon as the buzzer sounded.

I feel sorry for them all. They worked their butts off all year. They had only 9 players when you can dress 12. Brittney & Lauren, two of the rookies, barely played at all in the playoff games. And some stuff didn't work when it needed to. I think, in fact, that we peaked too soon, in early January, and the first signs of that were the struggles we had with lowly Lethbridge in mid-January.

I'm proud of them all anyway. Win, lose, draw -- they're still all heros to me.

The last home game of the year features recognition for the graduates. Feb 2nd was the night for Michelle Willson, Cody Darrah and Jeremy Odland.

Here's Michelle at the line... 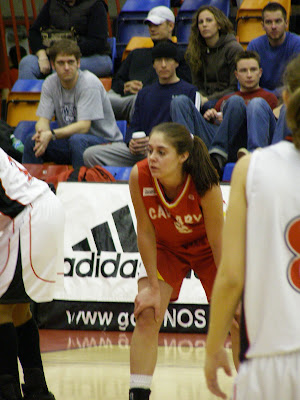 And saying goodbye to Shaunee... 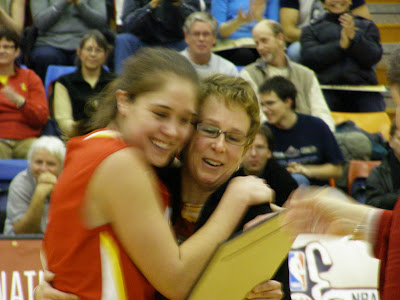 Turns out Jeremy is "related" to my daughter. Some cousin of her step-dad. Here's Jeremy and his wife... 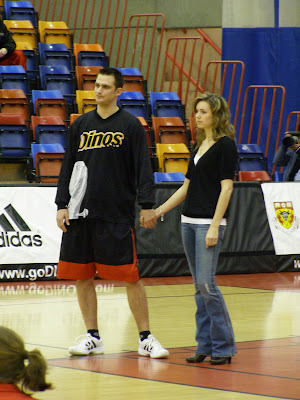 And a crappy shot of Cody and his folks. 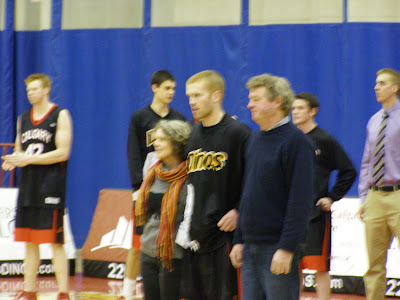 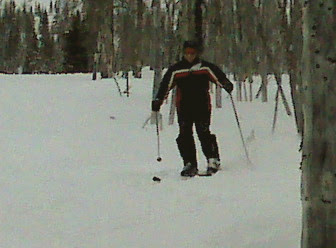 A great morning & poor afternoon. Very early start & mostly bluebird sky, but cold. So cold my goggles kept fogging no matter what I did. Not much fresh snow, but a few of my faves like Rolling Thunder, Scapegoat and others were groomed. This brought the vert up big time, and we had 7,000 m by lunch. The groomers were good, but we had fun playing in the trees up high.

Went up to the village for a s l o w lunch at Trappers. I like the food there, but the service is always atrocious. This particular day "the computers were down" and it took 90 minutes to get lunch. When we came out it was flat light, overcast & snowing, sort of. We went up Divide -- mistake, as the viz was terrible. Quite possibly the flattest light I have ever skied in. We finally gave up early, but the vert count shows we put in the mileage.
Posted by Derek & Karen at 20:42 No comments: