We're in Maui in April for a change. Normally, it's a fall trip, right before ski season, but this year it's April because a friend of ours is getting married here, and invited us to the wedding for some strange reason.

We always try to be extra careful on our first days here, but almost invariably get sunburned anyway. With the sun intensity here, it's just hard not to, especially when you're playing in the water...
...or just hanging in our beach tent.
Almost always, on our second (and sometimes 3rd) day, we hide from the sun. Our "normal" plan is to do an upcountry hike, but it almost always follows a picnic at one of our favourite little parks, Kepaniwai. This park is up the Iao Valley just before the Iao Needle. It's about 250 m above sea level, so just a bit cooler, and there's a pleasant little stream there. Or there was.

Apparently, in September 2016, the tail end of a storm whacked that part of the island, and turned the little Iao Stream into a raging torrent, similar to the Canmore flood of 2013 (about which I wrote a great book which you should buy if you haven't already). It made a mess of the park (which is now cleaned up) and tore up the road leading to Iao Valley State Park, meaning these days, you just can't access the needle overlook at all. This was in addition to an initiative to divert less water from Iao Stream for irrigation and drinking water, so the stream was just generally bigger anyway with the dams removed.

Well, we got to Kepaniwai today and my goodness, was the "stream" ever changed. It reminded me a lot of Canmore in 2013.
The lack of trees in the valley made a bridge visible I have never seen before. It's not so much a "bridge" as a "platform on a water pipe". It's just visible in the photo above.
So we crossed it and on the other side found a well trodden, fairly wet and muddy path heading upstream. It had a bunch of side trails leading off it, which we explored on the way back. On the way up, we stayed next to the stream, and were afforded a few overlooks where the flood damage was pretty apparent.
It was a typical "Maui hike", full of lush greenery (none native, of course)...
...crossing side streams and little waterfalls...
...and with some pretty flowers.
There were some birds (Japanese White Eye and chickens) but none of real note. The hike lead up to taro fields up the valley. Hard to tell, but I'm guessing that they're quite historic, but it looks like taro had recently been planed in one. But... taro needs to be flooded occasionally to grow, and all the irrigation pipes bring water in from the stream were broken by the flood.
About 50 m past the taro patches was where we stopped, an an overlook across from the Iao Needle and it's parking lot.
On a rock at this point is a petroglyph. No idea if it's old or recent.
There's a "famous" petroglyph that's similar in style to this one on the other side of the stream close to the car park, called "The Rainbow Warrior". It's very similar but has a double arc over his head.

The walk also features views of some of the (very tall) waterfalls cascading off West Maui Mountain into the valley.
I can readily recommend this hike, though it's less a hike than a walk of about an hour or a little longer, probably about 3 km round trip. The trail goes further than where we stopped, but according to a local we talked to, it gets cliffed out on the wrong side of the stream pretty quickly. Here's a GPS track of the walk; I only tracked it on the way back, where we took a "high route" through the forest rather than staying close to the stream. 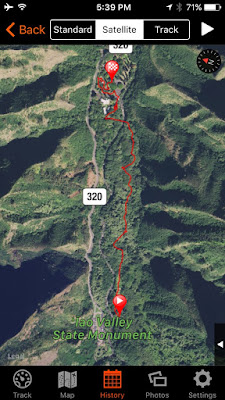 I don't know for sure but I'm betting that there's sacred stuff up the valley, and the taro fields should be left alone (the trail skirts them) as should the petroglyph. You can see the taro patches on Google Maps satellite view. The last third of the hike is inside Iao Valley State Park, so that's even a better reason to leave the taro and petroglyphs alone.

I'm also thinking that this hike was once for the exclusive use of the Hawai'i Nature Centre, which sits in Kepaniwai park. They used to do guided tours up there; now they just do educational programs for kids. There's a gate on the pipe bridge that's new and can be locked.