The trouble with books

Friends of mine (hi, Rob and Joanne) own a bookstore in Mexico, and spend the winter selling English language books to tourists escaping the winter cold. They tell me that, industry wide, physical book sales are slowing, driven in part by e-readers and in part by fewer people buying books.

I believe them; they're in the business. On Maui, there are no more bookstores at all (the best you can do is buy a trade paperback from a minuscule selection in a drugstore or grocery store). But what I find interesting is that people still want to read.

People on vacation in Maui seem to do one of two things: sit at the beach and read, or sit at the pool and read. I read 5 books while on Maui this year; Karen read 6. That's 4 more books than I've read this year, and probably matches what Karen has read. I have the time to read, but don't. I would like to read more, but don't.

To me the trouble with books is pretty simple: a bewilderingly, mind-boggling, brain-numbing plethora of books to pick from, and no way to find something I would like to read. I walk into a library and leave empty handed, because I don't know how to pick from the 54,000 books in our local library. So I take a book off my bookshelf and read it again (Karen does this all the time, and has books she reads every year). I have read nothing new in probably 2 years.

With movies -- and there's a lot of those, too -- I can pick a movie sight unseen based on the reviews of the critics whom I trust and agree with. Such a resource does not exist for books (that I am aware of). I am a loyal reader of Esquire magazine, and they publish on a regular basis short write-ups of books that men should be reading. I read every write-up, and not a single book in the 25 years of reading Esquire's lists and reviews has appealed to me. Esquire also publishes a summer fiction issue, featuring their version of the best short story authors writing the best short stories. I try to read them, and normally can't even finish them; they are uninteresting and unappealing to me, though I imagine others like them. 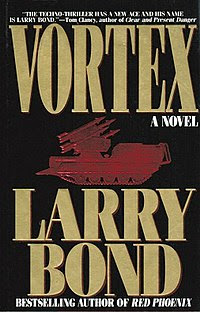 I have tried sticking with genres I like, based on authors I like. I own all the Frederick Forsyth books (I liked his earlier stuff more than his more recent stuff; he's 75 and who knows how much more he'll be writing). But reading recommendations of "authors like Forsyth" have resulted in me tossing more books after struggling to even finish the second chapter. I liked Tom Clancy's early work; his later stuff was formulaic, ultra boring, unoriginal and written to be a movie script (or worse, ghost written to be a movie script). He spawned a whole spate of techno-thriller copycats; I tried a lot of them, and virtually every one landed in the dumpster. I did like Dale Brown's FLIGHT OF THE OLD DOG, but every book of his after that was the same book as the first. I loved Larry Bond's VORTEX, but nothing he wrote after that was worth reading. I liked the HARRY POTTER series, but "authors like" J.K. Rowling got me nowhere.

Every week, Amazon sends me a recommended reading list. I've probably been on that mailing list for 5 years, and not one book has appealed to me. I have randomly bought books to take with me on vacation, and struggled with awful writing, stupid stories, asinine characters and unbelievable plots.

I am 100% certain that somewhere in that 54,000 titles in my local library, or the 1,500,000 titles carried by Amazon, are more than a few books I would love to read. I just don't know how to find them. And perhaps Rob and Joanne's problem, and the industry's problem, is that they have fallen into the trap of believing "more is better" -- when for me at least, more is not better. I've read that:


Fifty thousand people giving me 347,000 more choices each year doesn't make it more likely that I will find books to read. I think it makes it less likely. But giving me a minuscule selection of trade paperbacks in a grocery store isn't the answer either.

And so I wait the get Chris Hadfield's book for Christmas, but doubt I will read any other new book any time soon.
Posted by RyderDA at 11:03 1 comment:

Once you have mice, you kinda always get mice. We've had mice in the past, and tried to get rid of them.

First we tried trusty old basic mouse traps. The mice successfully stole the food without ever setting off the traps. No matter what we did, the food was always taken, the trap never sprung.

Then we tried new fangled plastic snap traps. Guaranteed to be sensitive, the mice got the bait time and time and time again without ever setting them off.

Then we switched to glue traps. We caught maybe one or two mice over the span of many, many months. The cat caught more mice than we did. I probably have a photo somewhere of Jello bringing us mice at 2 AM and playing with them in the bedroom.

So we finally switched to poison mouse bait. This seemed to work last year; we put it out, some got eaten, then they stopped eating it. When we pulled our walls apart to fix the flood damage this summer, we found dried up dead mice in the walls.

I don't know what started me putting the mouse bait back out this fall, but I did, and some of it started to get eaten. I figured the mice were moving back in with the onset of cold weather. The first bait I was putting out in September was like sesame seeds, but we ran out, so I bought more. This new stuff looked like little green rabbit pellet food. I put that out, and it disappeared. Fast. The more I put out, the more that disappeared. I thought this interesting, because it's suppose to kill in 24 hrs.

When we went to Maui, I asked our house sitters to monitor the bait stations. They did; and refilled them a LOT. Every few days they were adding bait. They put out almost half a kilo of bait in a month.

Today, I was prepping to ski tomorrow. Pulled my ski boots out of the basement -- and found them full of uneaten mouse bait.
Not just the green stuff; no, there was tons of uneaten seed bait, too. There was almost 350 g of mouse bait in my one boot.

Then Karen mentioned that one of the cardboard boxes awaiting recycling in the basement had mouse bait in it.
I think its time to call a professional. Seems these mice are just too smart for me.
Posted by RyderDA at 18:40 3 comments:

Can anyone help me solve this puzzle?

My old backup camera, an Olympus 560UZ, is suddenly acting up. There are two problems, and I can't understand or diagnose either. Neither is in every photo. I'm going to post some example sick photos that demonstrate the problems, plus other photos of what things should have looked like.

Example 1:
Then things get REALLY ugly when both problems happen at once.
I have tried fixing these problems by playing with white balance and ISO settings, to (mostly) no avail. Things look fine in my electronic viewfinder and rear LCD display -- until I press the shutter button. The captured picture is terrible.

This only started happening, and is an "occasional" thing (not every picture has the problem) -- though recently, it's happening with greater frequency.

So, smart people who are also photographers: what's the diagnosis? Sensor gone?
Posted by RyderDA at 14:53 2 comments:

Accidents on the way home

It was an unexpected way to arrive home from Maui.

We were driving home along the TransCanada, passed over Jumpingpound River about 30 km west of Calgary, climbed up the "Green Drop" hill (a hill where the Green Drop lawn care company has mowed into the grass their logo -- bypassing the "No Billboards" law we have here), crested the hill to find...

...cars slamming on their brakes. Debris on the road. Smoke. A truck overturned laying across the road. Fire in the ditch. And only ~6 cars between us and the mess, meaning it JUST happened.

I called the RCMP -- and was the first to do so. A 4 minute call. Karen ran back to start waving down the oncoming traffic -- doing 120 km/hr coming up a blind hill to a catastrophe scene -- to try and stop secondary collisions. She sent someone forward with a fire extinguisher. The flames are put out while I am on the phone.

The first RCMP arrived just as I finished the call. I grabbed my first aid kit, cursing myself that my big emergency kit (with flares and reflectors and vests and stuff) was at home, removed to make space for luggage to go to Maui. I ran to see what I could do.

One victim. A truck driver, prone on the pavement. Diesel fuel and debris everywhere. Two people helping the man, both trained in first aid. I announced I had first air training and asked if help was needed. Shoulder injury, hip injury, numerous facial lacerations, spinal involvement, lucid but quiet. He had no idea how he got out of the truck. The two Good Samaritans were supporting the victim's head and arms. He complained of being cold in the 50 km/hr, 7° wind. I wrapped his legs in my down jacket. An Irish lady, trained paramedic, arrived. Pulse check. Strong but slow.

More RCMP and Sheriffs arrived. Some took photos. We stayed helping the victim. They brought disposable emergency blankets. We placed supports under his feet.

Then the fire department arrived. One firefighter took over from one of the first volunteer responders. Standard questions asked to assess head trauma. Radio calls.

Then EMS arrived, and it was their turn. A re-check of vitals, standard trauma checks and more questions. More radio calls. EMS started to cut the victims clothes off. Abdominal bruising. A second ambulance arrives. The victim is rolled onto a backboard, and clearly this wasn't fun for him. A neck brace is installed. We volunteers back away as we are no longer needed.
And we wait. The victim is taken into an ambulance and out of the wind and cold.

Then STARS arrives.
I think about this. STARS takes off 2 minutes after getting a call. Flight time to this spot is 7-10 min in that helicopter. So STARS was called 9-12 minutes earlier -- about 90 seconds after EMS arrived.
STARS departs within 5 minutes of landing.
The RCMP and Sheriffs clear a way past the mess, and we are released to drive home. We were not witnesses, and have nothing to add to the investigation that has already started.

What the heck did happen? Who knows. But it was blowing 50-70 km/hr winds, and that gravel truck with its pup trailer were empty. Did a bad gust of wind cause the trailer to swing out of control? You can see it upside down in the ditch, and the guardrail's a mess. The truck obviously rolled, but landed upright.
But the truck has stopped way too close to the start of the guardrail damage, and was most clearly doing over 100 km/hr. So did he get into trouble earlier? Will the victim live?

We won't ever know. Maybe the RCMP will. The highway was closed for at least 3 hours after we got let through.

And it made the news. Areal pictures from Global. Stories on the CBC and CTV -- and yes, that's my photo on the CTV page.

Not the best way to arrive home, but at least we were able to help.