A shirt I need 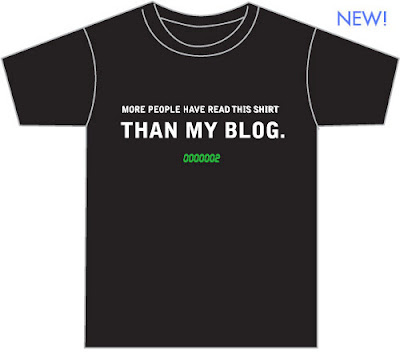 Like it? See www.despair.com for more.
Posted by Derek & Karen at 17:47 No comments:

Snorkling was OK this trip; not spectacular, but we had some good days. We arrived at the end of a Kona storm, which makes South Maui (where we stay) a little murky. Visibility improved after a few days, and then the viz alternated between good and OK for the rest of the time. We saw about 20-30 turtles, 4-6 octopus and about 6-8 eels. These species are what we call "the big three", and a great morning outing we get to see all three in one dive. The best sightings were:

1) At our favourite beach, 6 turtles at once swimming within 20 feet of us;
2) At Ulua beach, two octopus meeting and not getting along;
3) At Ahihi Bay, a ton of fish

So here's some shots, scanned in from a disposable underwater camera.

The red bump in the centre of this shot is an Octopus staring at me unhappily. 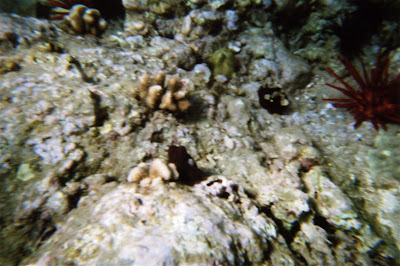 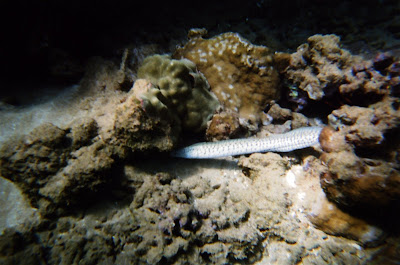 Some turtle shots. They have a tendency swim around like they own the place, and they sorta do. 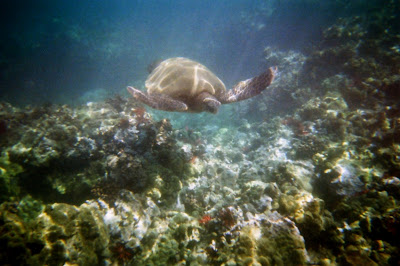 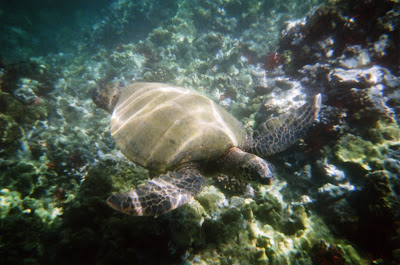 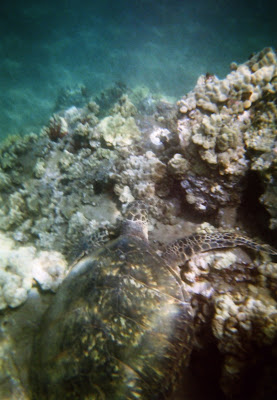 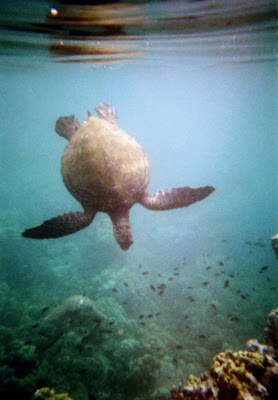 This is the best group tutle shot I got; there's 4 in the frame, but only 3 are visible. 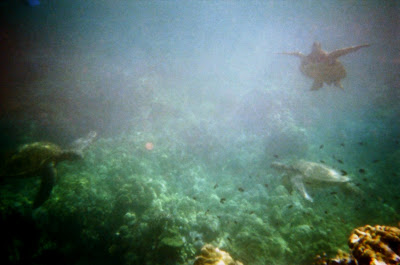 KC likes to find flounder, and considering they like to masquerade as sand, finding them is quite a trick. 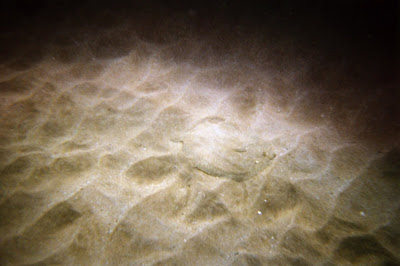 Finally, the blob on the centre right of this next shot is a black sea cucumber. They "eat sand" (at least, they eat the organic matter that's on the sand). 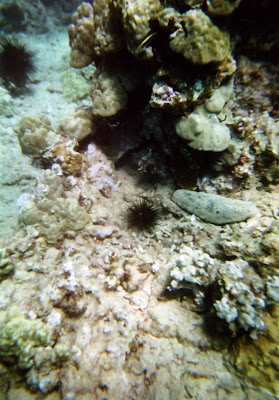 You've seen no posts for a while since we just got back from 3 weeks in Maui. Having been there between 11 and 15 times (we've really lost count, though I'm sure I could actually figure it out), it's a bit of a pleasantly boring rut for us, with virtually every day spent at our favourite beach... 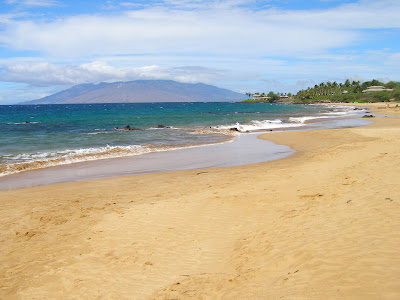 That house on the point at the end of the beach belongs to Clint Eastwood, by the way.

At the beach, we snorkel and boogie board. I haven't got the underwater pictures back as yet, but will post some when I do. For a change, KC got a few shots of me catching some waves. 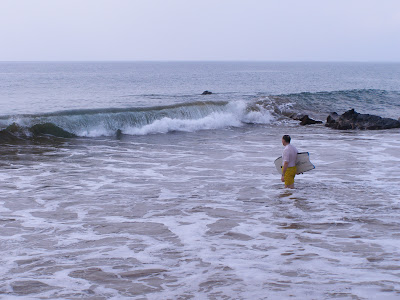 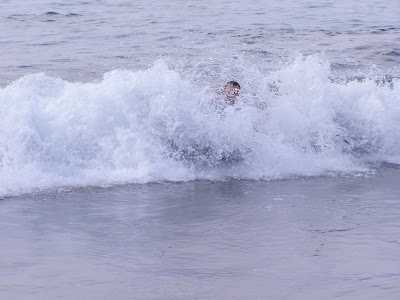 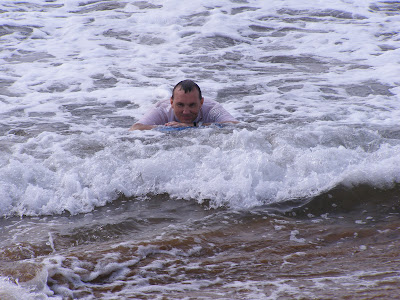 Beaching occupied all but about 4 of our days. One day we went to watch the kiteboarders on the beach by the airport near Kahului harbour. 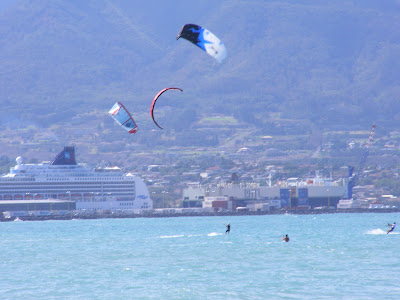 Twice we went upcountry to go hiking and birdwatching for native birds. Our favourite upcountry trail isn't very popular so is always quiet. It features the strangest pine trees you have ever seen. 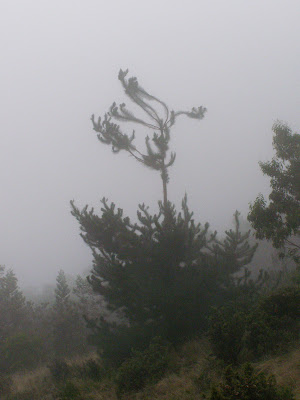 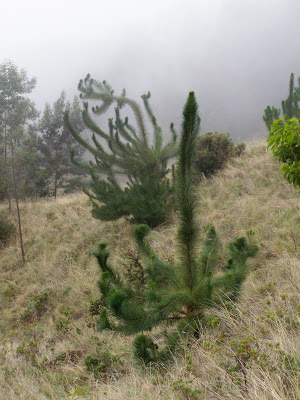 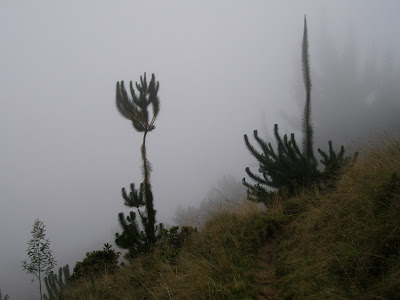 The reason they grow like that is because there are no seasons on Maui. These white pines were planted originally in the 1920's as part of an experiment to test harvestable timber types and are from Oregon. Pines use seasons to decide to branch and since there are no seasons, it takes some weird kind of weather to cause them to stop vertical growth and start branching for the next "season". Since this happens infrequently on Maui, they grow spindly and strange. In the fog and mist of upcountry, they create a very eery hiking experience.

Courtesty of a long and uninteresting story about a bathtub that wouldn't drain, we ended up at the luau at the Maui Prince. It was KC's first and my second luau; we don't normally go to luaus, but it was fun to see the dancers and eat the kalua pork. 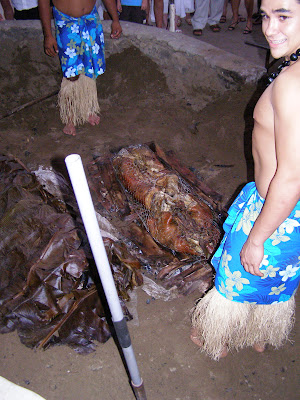 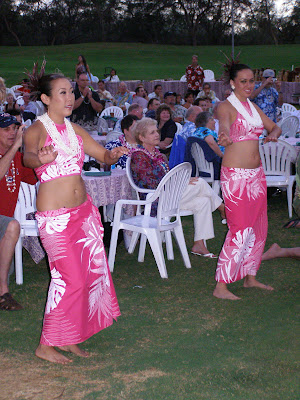 I'd load more pictures, but Blogger doesn't seem to like any uploads I do today. Accordingly, stories about the EA Sports Maui Invitational and pictures of Micheal Jordan will have to wait for a later post.
Posted by Derek & Karen at 13:25 No comments: