It was another one of those weeks that makes Calgary an interesting place to live. It was 24° and sunny Thursday, 4° and snow on Friday. That put a layer of snow up in the mountains, though admittedly not a very deep layer. Obviously, the snow fell all the way down to the valley floor, and the ACMG reports noted 2 cm in Canmore on Friday morning, with a forecast of a sunny but cold weekend. So our plan for was to sit out Saturday as a hiking day, let the sun do it's magic reducing the snow (at least down low), and hike Sunday.

Our version of "sitting out Saturday" was to go into Canmore for the Festival of Eagles. At this time of year, literally thousands of Golden Eagles migrate over the town (the official tracking station in the Kananaskis Valley has recorded over 2,000 since mid September). There were spotting scopes set up, though we didn't see anything. The town had also arranged for the Alberta Birds of Prey Foundation to bring in some birds, so we got to meet (and pet!) a Great Horned Owl, a Golden Eagle, a Burrowing Owl, a Kestrel and other very cool birds. Tragically, I did not bring my camera.

Meaning I also didn't get a photo with Ben Gadd, author of Canadian Rockies Geology Road Tours and other books, and since I didn't know he was going to be there, I also didn't bring my copy of any of his books to get an autograph. But I did get to chat with him for a few minutes. He's a very cool and nice guy.

The weather forecast did indeed hold, and today was brilliantly sunny and cool, -4° in the morning, and 2° by noon. So we headed to West Wind Pass, one of my favourite places to while away an afternoon. We haven't been up there since July 2009.

The trail is mostly on an exposed southern face, so was in general snow free and dry as a board as I expected. 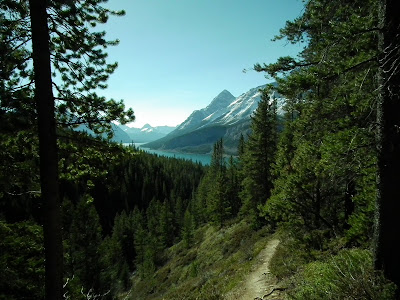 Over the years I have been hiking this trail, there has been a general increase in the braiding of the trail, in most cases to avoid a 100 m section of trail that is on an exposed rockface. I have never found this section to be a problem; the rock is very textured and hard to slip on, and any really exposed bits have trees to grab on to. 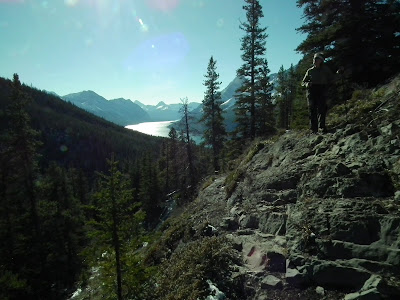 Once at the top, the view into the West Wind Valley was great, as usual. West Wind Ridge is snow free, as is Pigeon Mountain, except for a very slight dusting at the top. 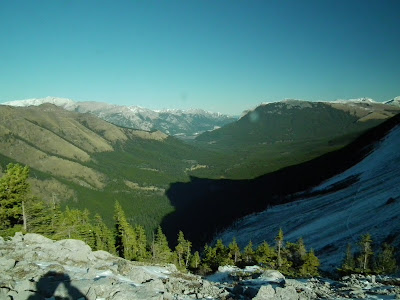 KC got me a new toy to take to Maui: A Kodak Playsport video camera that works underwater. So I decided to being it up here and practice with it.


It was, as usual, windy as all get out and only about 3° at the pass. In some ways, it looks pretty wintery up there. 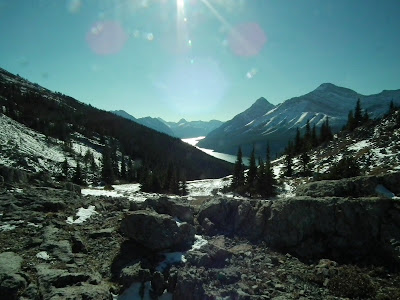 Interestingly, at least a couple of folks appeared to have tackled the Windtower, based on footprints on the access trail. 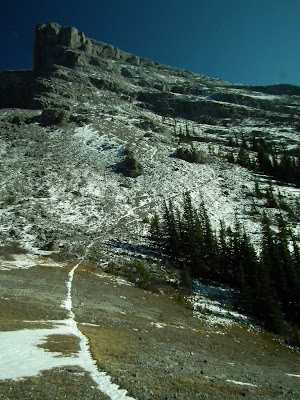 We would have lingered longer up top, but even with toques, mits, 3 layers and bright sunshine, sticking around wasn't warm. Also, aside from the view (which is always worth gawking at), there wasn't much else up there. There were very few tracks in the snow (the odd rabbit and mouse sized footprints), but our total wildlife sightings today consisted of a squirrel, 3 robins and a crow. At least I saw a nuthatch and some chickadees in Dead Man's before we left.
Posted by Derek & Karen at 16:28