The snow showers that blew in overnight leaving some fluff here and there. It's amazing how much of a difference 3 cm makes to glare ice when groomed, like for instance KC on Corkscrew -- where the Death Muffins were yesterday. 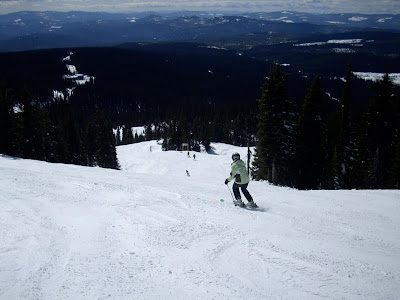 However, even 10 cm of blow in on ice is still ice.

A strong wind blew from the North all day and kept temps well below zero despite the continuous sunshine. 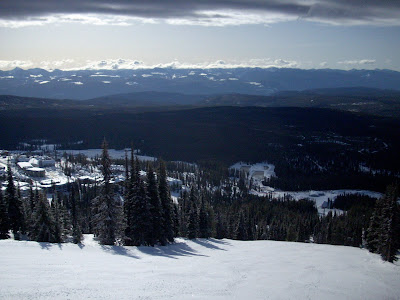 Accordingly, only the lowest most reaches of the mountain on faces pointing directly at the sun (like lower Perfection and lower Born to Run) saw any real softening, and that only happened around 2 PM. Anything facing the wind and groomed was wind polished and rock hard (like Powder Keg and Powder Gulch). And uniquely, some of the faces notorious for icing up (the top of Bullet, for instance) were in the right place to catch blow in, and so were actually really silky most of the day. Good examples were upper Sun Run and the trees at the top of Secret. Generally, though, it was suicide to venture off the groomed, even though it looked very nice, as KC and my attempts in Easter Gully would attest to.
Posted by Derek & Karen at 17:39