Likely the most popular serious hike near Banff townsite is the Cory Pass/Edith Pass loop. It isn't Ha Ling steep (Ha Ling rises 810 m in 2.8 km; Cory Pass is 975 m in 4.8 km), but at times it feels like it.

The weather wasn't great all day, mostly overcast, and in the morning some low lying fog filled the Bow Valley. The first 90 min of the hike climbs 525 m up a grassy ridge with ever improving views of the Vermillion Lakes and the valley. 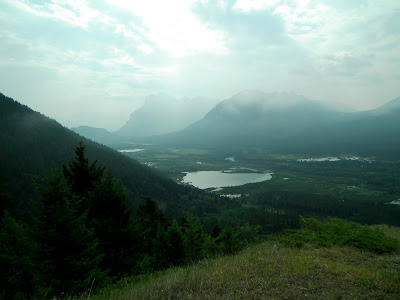 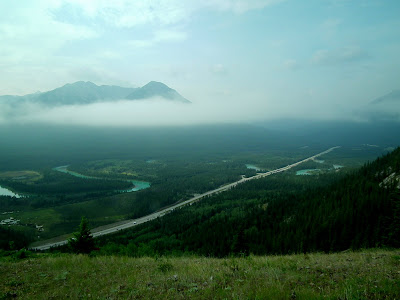 You gain a rocky knob with the first actual views of the pass -- the V notch on the left side of the photo below, still over 2 km and 400 vertical metres in the distance. 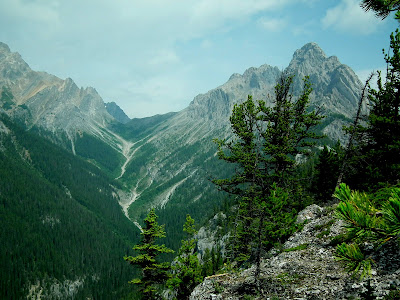 The trail is slightly visible in the photo, angling to the pass across the scree slopes below Mt. Edith

Along the ridge there's a spot of downclimbing on this steep rock face. While not hard, it pays to be very careful and be thankful for some of the trees that make good handholds. 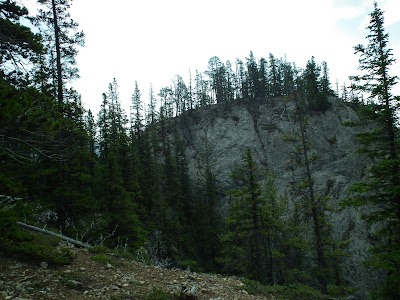 When I say the trail hugs the scree slopes, I mean it. 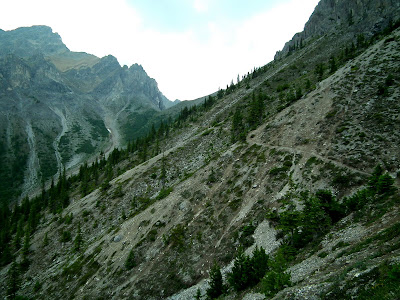 While the valley leading up to the pass is sure pretty, the pass itself isn't much more than a gap in the rocks. It offers OK views back along the trail route... 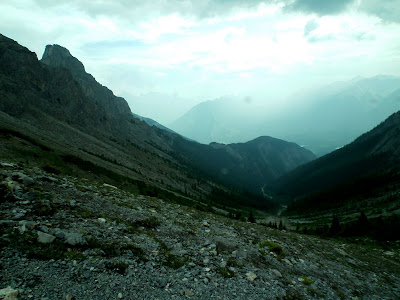 ...but it is full of neat rock formations that give the Gargoyle Valley on the far side its name. 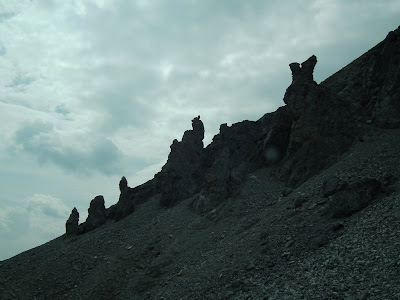 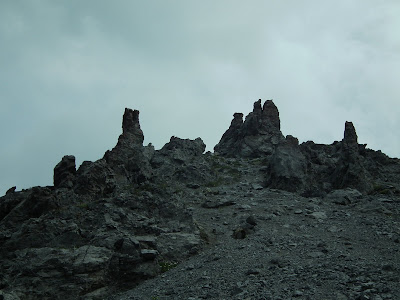 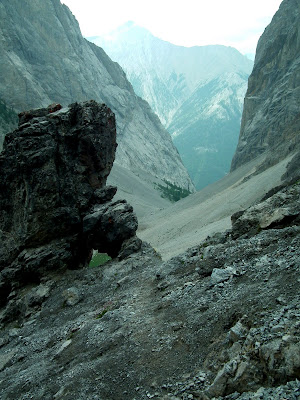 The whole area up here looks like perfect goat habitat, but we sadly saw none. It's also supposed to be windy up here all the time, but it was dead calm for us.

Crossing the pass drops you into Gargoyle Valley. The trail flanks the scree again all the way to the head of the valley in the gap between Mt. Louis of the left and Mt. Edith on the right. 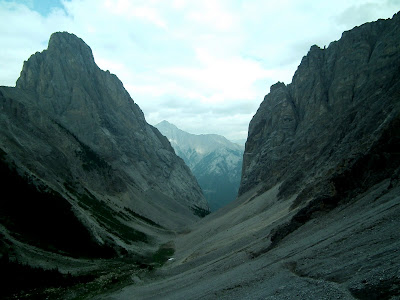 Now to me this is dumb trail building. I would have built switchbacks descending to the valley floor then headed the trail out on the flats.

The mouth of the valley is full of big rocks and the trail kinda disappears, though there must be 20 cairns scattered around marking a handful of routes. This looked like good Pika country but again we saw (and heard) none. The other side of the rocks suddenly becomes green into the backside of Mt. Brewster and the valley of 40 Mile Creek. 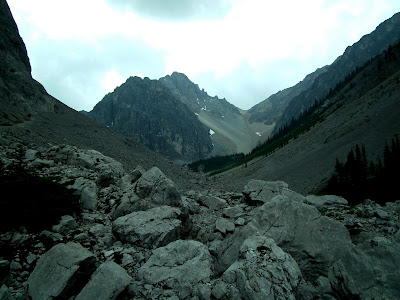 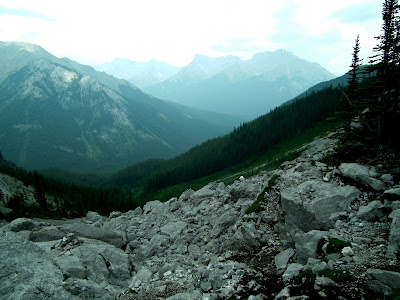 To the pass, you have climbed 975 m, and it's been downhill from the pass to this spot. Now you get to climb again, and while it's not much, on the order of 75 m, it's steep and sure unwelcome. Especially so since the trail is vague and cruddy. 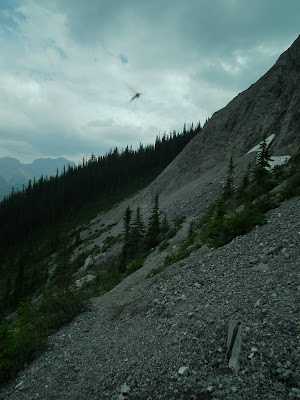 Looking carefully at the photo, there's actually a small orange sign in the trees in the centre of the frame, and that's where the trail heads. And yes, that's a mosquito parked on the lens. They were out today, but not in the forces they were last week.

Once you hit the trees, the long 5.5 km descent starts, and aside from the odd avi slope with views of the backside of Mt. Norquay & Mt. Brewster, and the classic view back to Mt. Louis... 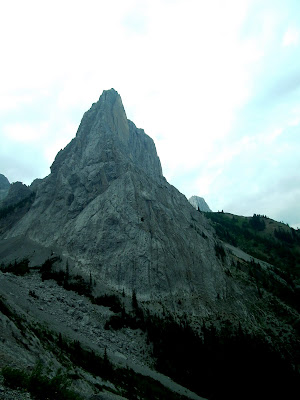 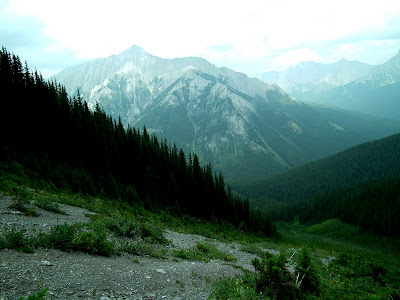 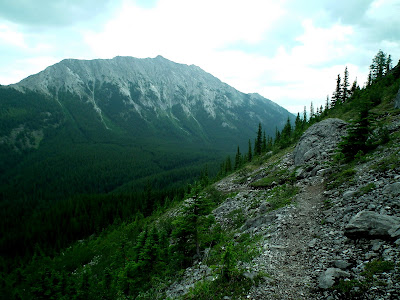 ... it's a disenchanted forest walk in a creek valley, with the only bright side being that the moss covered ground is quite pretty and very soft. 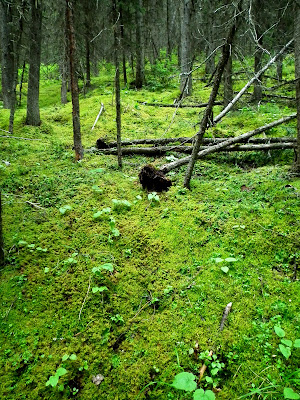 Fortunately, we had a very nice distraction for this section of the trail. All day long we kept running into a very nice pair of young lady tourists from Paris and Germany. They had actually arrived at the trailhead by taxi (only in Banff) and we offered to drive them back to Banff at the end of the day. We intercepted them at the creekbed and got to chat with them all the way back.

This trail is not for the feint of heart. It's tough, and a strenuous workout. It raises my respect for the folks who climb Mt. Edith, who slog up the trail in the dark hauling climbing gear, and once at the top, then actually climb the vertical rock faces. We saw numerous pitons and climb starts while on the hike. Personally, I would be dead tired and climbing the mountain would be out of the question.
Posted by Derek & Karen at 13:20