We have planned to go up Lesueur Ridge at the south end of the Ghost for some time, but every time have been foiled by weather. Twice this summer including just a few weeks back, we skipped it because it was overcast & drizzling. Today's forecast was for increasing cloudiness and rain starting late in the afternoon. So we aimed to get the the trailhead early enough to get at least a short loop in before the weather turned.

Based on a detailed road map I obtained from the MD of Bighorn, we opted to get to the trailhead via Richards Road, which runs between the 1A just west of Morley and the Forestry Trunk Road right at the Ghost access road. This was not a good idea. The road is blocked by a very large 50' puddle that is in fact part of a lake that the road skirts. The puddle sits right on the northern boundary of the Stoney Indian Reserve. Here's where the road is blocked, by the lake in the middle of the photo. 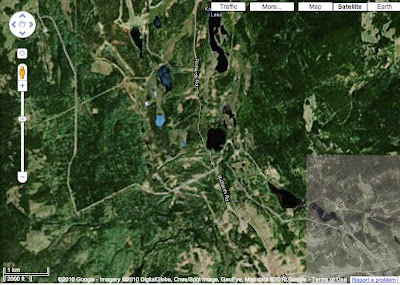 And here's a zoomed out shot. Lesueur Ridge is at the top left of the picture, the 1A at the bottom, and Richards Road is marked. 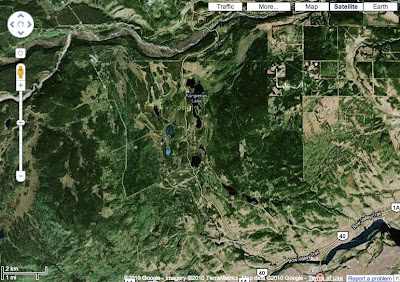 So but for a huge 50' long puddle, we would have been at the trailhead at 2 PM. We tried to go around the lake to the west on something marked as a road on the map and visible in the satellite image, a "road" which skirts the northern boudary of the Stoney Reserve. But this stopped being a road in short order, becoming a deeply rutted truck track. So we had to backtrack down Richard Road to the 1A again, head east on the 1A to the Forestry Trunk Road, then follow it back to the Ghost access road to get to the trailhead. This took almost an hour. The weather was socking in more and more as we drove, and just as we got to the trailhead, it started to rain. Within 5 minutes, it was absolutely pouring, and the temperature had dropped from a tolerable in the rain 14° to a rather less pleasant 5°. So we bailed; the third time was not lucky.

We thought that since we were out here, we would check out Richard Road from the north. Surprisingly, this road is paved (the Forestry Trunk Road here is not). Or at least it's paved to about 2,000' from the lake, where it just stops being a road and starts being a poor truck trail.

So we did no hiking today, disappointing because my friend Marcin from M&M Hikes sent me a GPS track for this route. But we did get to explore the Stoney Reserve, and get barked at by a lot of dogs.
Posted by Derek & Karen at 17:44