I do not intend to post daily while on Maui, but when the first thing I film with my new underwater movie camera is a shark, I just can't help it.

I was snorkeling in a little cove chasing some angelfish when a White Tipped Reef Shark came by. These guys are pretty benign; "docile and approachable" is how my fish guidebook describes them. 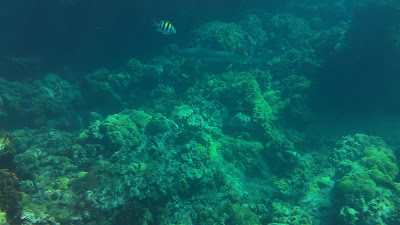 I quickly switched to movie mode and followed him swimming along. You can tell I'm new with this camera; he stays too high in the frame (I can't see the display under water) and I didn't stop the thing filming fast enough.


He was about 4' long and about 15' from me at the closest. He didn't seem to care about my presence at all. We were surprised at the lack of fish on the reef; maybe he was why.

Then a huge turtle, who I had seen with his butt parked under a rock, woke up and drifted by.


The last thing I played with was an attempt to shoot a video of a boogie board ride. The waves today were very good for this; not too big and easy to ride. While the "point of view" movies were good, it was far more fun to film KC...