Looking back, the earliest in the season I have ever skied was at Nakiska on December 10, 2000, back in the days when CFCN had a ski team, and we did early season events. Generally, I agree with Lucy from "A Charlie Brown Christmas" when she said "I don't eat December snow; it's not ripe yet." Looking at my pre-Christmas records back to 1996, snow coverage is never ripe, always low, and the weather tends to be cold. So I consider any time before Christmas to be "bonus days".

And it was indeed a bonus day to be up in the mountains, despite the limited snow coverage and runs open. For there was not a cloud in the sky, and there was an inversion meaning near zero temps up top while it was -14° in the parking lot. If there had only been more snow. Sunshine has a 53 cm base right now; Goat's Eye and Divide remain closed due to lack of coverage. Angel is open, but the face above the traverse is closed, as is the entire face below the Green Run, including everything from Red 90 through Boundary Bowl back to Angel Flight and the Pockets. At Cat Track Corner, you could traverse across above the terrain park, and gain access to some "interesting" stuff (it's either that or take Green Run to Peyto Pass). Here's a view from up high on the traverse showing the state of the terrain park. You can see the have been harvesting snow on the extreme left of the photo just above the Green Run, and the groomed strip skiers right of the terrain park at the base of Viking Ridge/South 205 on the extreme right. 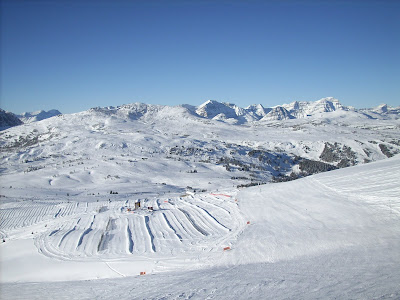 This is the first time I have ever been at Sunshine when everything skiers right of the original Angel Flight down low (where the old Angel double chair topped out) had trees sticking out of it. Barner's Bowl was a mess; TP Main Chutes are more rock than snow. I don't know why TeePee Town is even running.

I was able to find some relatively fresh snow bits by traversing into the OS Pitch; I can't say I recommend it. Due to last week's cold snap, the snow has no structure, and there's nothing underneath it. Ruts are real, so you sink through the powder very easily and hit your choice of either the ground or a bit of hard pack hiding. Either way, it's tough skiing. There are also bits of exposed rock pretty much everywhere, so you have to be careful. The same is also true of the entire Assiniboine Trail area; tempting looking powder that sucks to ski.

So if you kept expectations low and stuck to the well tracked groomed stuff, you could have fun in the warm sunshine. The new Strawberry Chair is good (very fast, faster than Standish), and there were some nice turns to be had in places like Boutry's Bowl. We didn't get up Standish or spend much time on Wawa (where only Meadow Park was groomed, and very badly at that), Wolverine (which was in the dark and colder courtesy of the inversion) or Jackrabbit. But we kinda got bored of the limited terrain we could ski on Angel, so left early, having skied only 4,820 vertical meters and 13 runs. But it was good to get out and realize that I remembered how to do this...
Posted by Derek & Karen at 15:51