The most incredible thing I have ever seen

I've seen a lot of amazing stuff in my life, but I think this morning carved a new notch in the category of "amazing".

We went to see the FloralHolland Bloemenveiling, the world's largest flower auction. To call this spectacular makes other spectacular stuff (like walking on the moon) pretty mundane in comparison. For starters, it's one of the largest buildings in the world. I've been to the Boeing plant in Washington State, and that may be the bigger, but these guys have Boeing beaten hands down in the "busy in monster buildings" department. The scope of this place is hard to describe.
The place sells 20,000,000 flowers and plants EVERY DAY. Five days a week, in a single 4 hour shift from 7 AM to 11 AM.
You name a flower, and it was there, in bulk. Antherium? 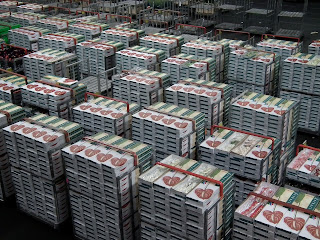 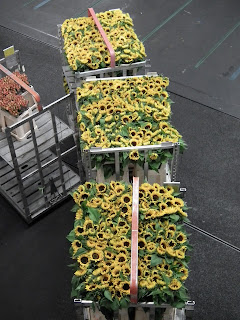 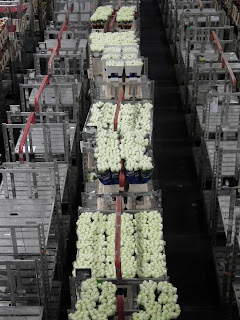 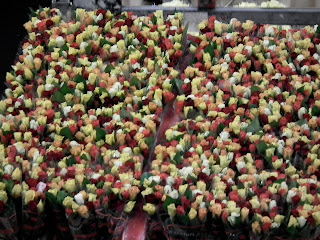 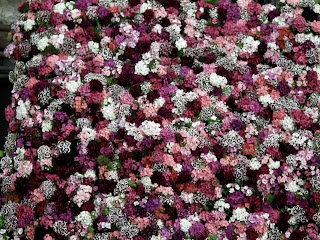 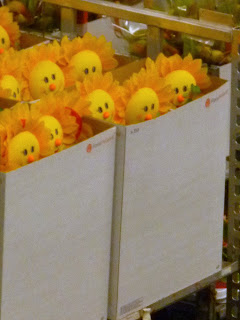 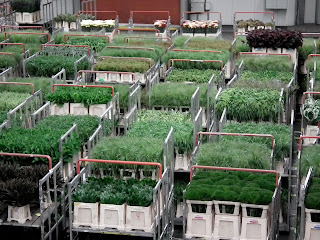 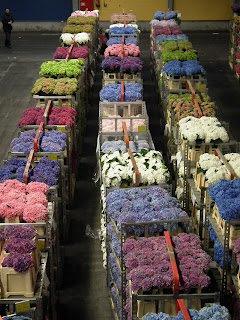 It is quite literally organized mayhem. Flowers arrive in adjoining warehouses, are sorted and placed on the metal trollies, in containers containing a fixed number of stems (everything is priced by stem). Some of the warehouses are across the street, so they built this incredible fully automated contraption that flies the trollies though the air (shades of the door room in "Monsters Inc."). Then the flowers file into the auction rooms on automatic conveyer belts. These rooms are more like high-tech lecture halls, and there is not one but two auctions going on in each room (and they have 6 rooms).
Trollies creep through and, literally, large batches of flowers are bought every 10-12 seconds, using the most amazing bidding clock system. You can see it in this YouTube video I made (no, I don't know why you can only see the left half, and if anyone can help me, I've spent an hour trying to diagnose it, so help is appreciated).

Buyers can buy anything from 2 bunches (though there is a minimum to every lot) to a whole trolly, which can be 27 containers with each container holding 10 bunches. Once they leave the auction room, the train of trollies is split up, and they are sent to a distribution area, where all the buyers purchases are consolidated onto trollies and moved to the buyer's warehouse, which is also adjoining.

While there may be an automatic conveyer belt to move the flowers into and out of the auction hall, it is the work of trolly drivers on either little carts pulling huge trains of trollies, or Segway-like devices that pull a few trollies at a time, that get the bulk of the flower moving done. And this is the organized mayhem of which I speak, with little orange carts madly whipping around in a spontaneously choreographed dance of deliveries, with a near collision every few seconds (which reminded me of the Dutch on their bicycles). Take a peek at this video of it all...

and this one of the Dutch showing their driving skills.

It is an awesome spectacle to watch.
And then suddenly, a bell rings, and it's all over. The auction rooms shut, the flowers have all been put through, the final purchases are delivered, and the coffee carts come out.
The place, as I mentioned, is huge. So bid that in fact smack dab in the middle is a hairdressing salon.


We did some other stuff today, too, but I've spent so much time loading 3 videos and trying to figure out why they are being chopped I have run out of time top post those (I don't like video). Stay tuned.
Posted by RyderDA at 16:37

My second largest customer.... we sell them the ID-plates on the metal carts.