We came here to eat. And not just eat, but eat BBQ, the real kind, made in a smoker that takes hours and hours and creates food born of gods in the home of the world's biggest BBQ championship. More on this in another post.


So we didn't have high expectations for spending time here, which is just as well, because our expectations were met.


The day started with pouring rain and a thunderstorm, so we headed to Kansas City's brand new (open 4 weeks) aquarium, SeaLife. The little Maui Ocean Centre puts this place to shame. An hour line up to get in (every weekend, according to the staff). Expensive. Small (we were out in an hour). Big signs about seals and turtles, but no seals nor turtles. The only cool things were some interesting "get inside of them" tanks...
...huge 6' long green morays...
...and an octopus willing to pose.
After hiding inside from the morning thunderstorms, we headed up to the City Market.
Well, this wasn't really much of a market. There was a cool Italian grocery, and some Farmer's Market stuff, but not much else. However, there was an antique car display on, featuring... a DeLorean.
We lasted less than an hour here. We tried to go for a walk to a riverfront park, but you can only get there by car (we think). We headed back towards home, stopping at the train station (because train stations usually have cool architecture). We were not disappointed.
The station also houses the Science Museum, a model train display...
...and working models of real rollercoasters.
Across the street from the station is Liberty Memorial, honouring the American's (belated) participation in World War 1 (they joined in 1917 for the last year, but not as actual Allies). But hey, the hilltop thing... 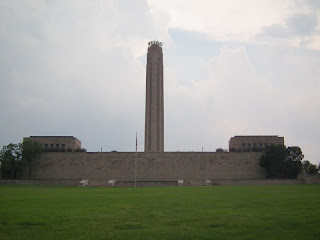 ...has a nice view.
Hey: Got a US note handy? Pull it out. See the little sealy thing on the centre left? It says this: 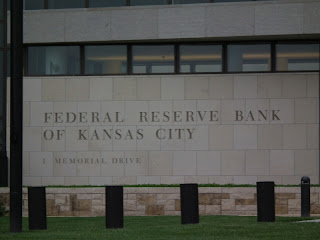 Which is this place:
We're off line starting tomorrow for a few days. Ozarks, here we come.
Posted by RyderDA at 21:23