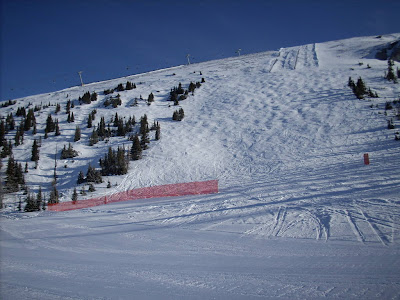 For a while, it was "warm" (-13°) up top and cool at the lift base. Then it all mixed. Then clouds crept in. For a while it was even foggy in the middle, but eventually it just settled into this constant blah of gray and -12°. The snow was OK. The groomed stuff was great, in particular the early AM runs on Rolling Thunder. After a while the ungroomed switched from brittle to actually quite nice, with highlights being Ecstasy, Bye Bye Bowl, the Assiniboine Flats and anything in the trees. In all, it would have been a pretty average day, except... 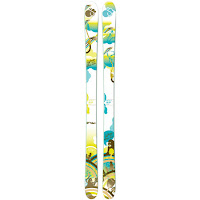 Salomon was running a Demo Day tent in the village. I just bought new skis (though I have not got them yet). KC needs new skis. So she tried two, and absolutely fell in love with the Mai Tais. She tried the Lady, too, but no matter where we took the Mai Tai, she raved about it. Now, the Mai Tai is a park & pipe twin tip ski. KC is not a park and pipe girl. But she kept talking about them. We had planned to go home early, but the Mai Tais were calling her (the skis, not the drink). So at the end of the day, we asked what the skis retailed for, and one of the reps told us, but he also suggested we ask about the price of the demo skis themselves. He named a price, and we were hooked.

So KC got new skis today, and she picks them up tomorrow morning on the hill.