Ski Day 27: Back to Powder at Home

Some sun to start the day, then it socked in and was overcast with fairly flat light in the afternoon. The 5-8 cm overnight (where it hadn't been blown off) was nice. Next to the fences, and in some places in the trees, it was at least boot top. All the snow this week has covered everything nicely, but most out of the way spaces (like the Wildside chutes, the left side of Bye Bye bowl) featured 10-15 cm on top of crusty stuff that seemed like it had been sun affected. The sun drenched lower pitches (even those on Goat's Eye, such as Rolling Thunder and Silver Scapegoat) clearly showed signs of freeze/thaw underneath. So we found very few pure powder places, but the turns were in general really nice. Here's KC under the Cleavage rocks... 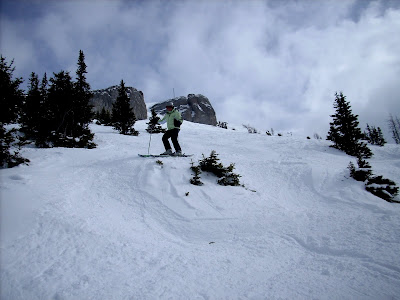 ...and playing in the PM in Bye Bye Bowl. 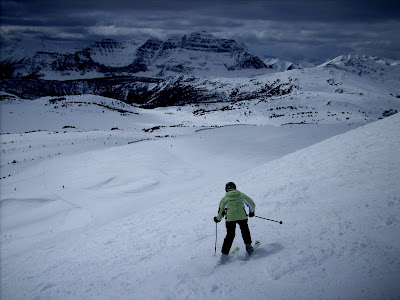 It was chilly most of the day; -6° to start, and PM temps slightly warmer (the Angel base thermometer read +11°, which was nonsense, and the Divide one was in the "sun" so wasn't reliable either) with a fairly stiff breeze most of the day. The combination of the long weekend and the 30+ cm this week brought everyone out, and the hill was a zoo.

There was an in-bounds avalanche at Sunshine on Thursday PM. A natural 1.5 slab avalanche broke free on skier's right of Fat Boy. Patrol told me it was a 1.5, and if that's what a 1.5 looks like, I'd hate to see a 4. What was even more impressive though was to see folks -- lots of folks -- using Fat Boy on Friday to exit the Dive, skiing in fact quite close to the slide. Braver folks then me. I tried to get shots of it, but this is the best my crappy little camera could do, taken from near the top of Wildfire. Look for the fracture line on the left centre. The Fat Boy Delirium Dive exit is straight ahead. 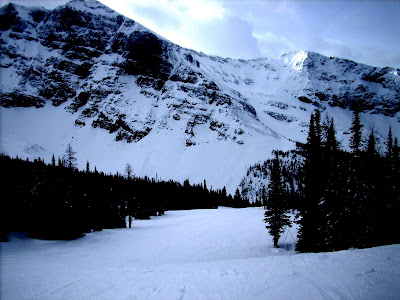