It may be mid-April, but it felt like early May. Rock hard freeze-thaw conditions until 11, then within an hour the world went soft. There's the odd rock & tree poking out on some traffic areas (Silver Scapegoat and Wildfire, for instance). By 1 PM, the most sun exposed places (like Boundary Bowl) were downright sloppy. It was super sticky in the PM, too; the ski out in particular was like glue. Temps started the day above zero, and the base of Goats Eye broke 10° by 10. There was sun and some high cloud all day (with a bunch of sunburned faces) which caused peak PM temps in the mid teens all the way to the top, and 19° in the parking lot at 3 PM. At this rate (and the forecast is calling for this all week) the ski out won't last.

The thing I like about these conditions is that when things go soft, virtually the entire hill becomes skiable, and we go places we don't normally go, like South Pockets. Here's KC in there in her classic "stuff arm" pose. 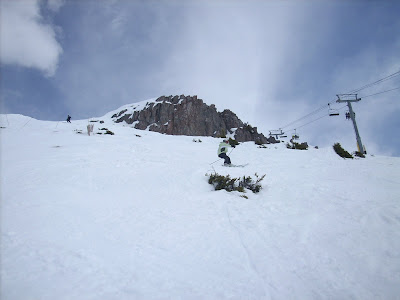 There were avalanches everywhere. Half a dozen in Eagle Basin... 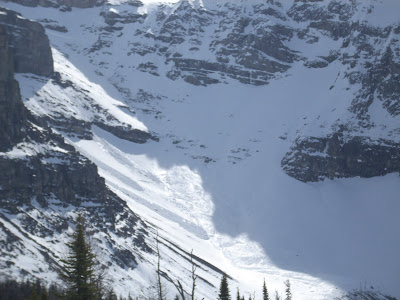 ...pretty much the entire face below Silver City, including a biggie in Silver City itself... 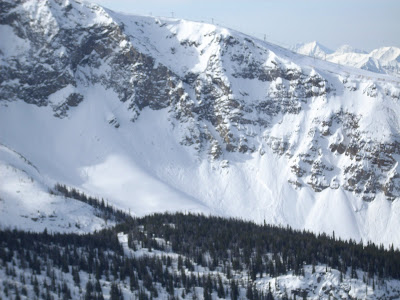 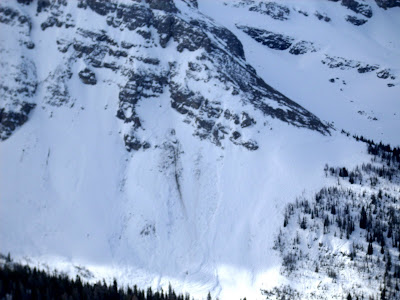 We also saw one. We hear this loud bang and rattle of thunder, and saw a snow waterfall on The Monarchs. Look for the remains of it in the upper centre. 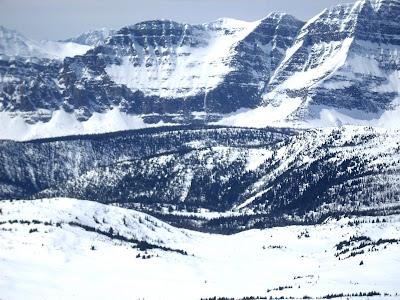 As the above stats show, we broke one million vertical feet today. In fact, we are only 11,000' short of what we skied last year, with at least 6 days left in our season.
Posted by Derek & Karen at 16:42