Sparrowhawk Tarns -- The Basin of Wow

Headed up into the Sparrowhawk Tarns basin on Saturday. This is a wild place, where you get to follow your nose and explore a wide open meadow above treeline, where the crossing of every rock step brings a greater wow factor. That, and you get yelled at by marmots & pikas pretty much all day.

The trail starts at Spray Lake, and initially follows the same route as the Read's Tower trail. So you climb up about 200 m to the lip of a hanging valley next to Sparrowhawk Creek with the occasional view back to the lakes. 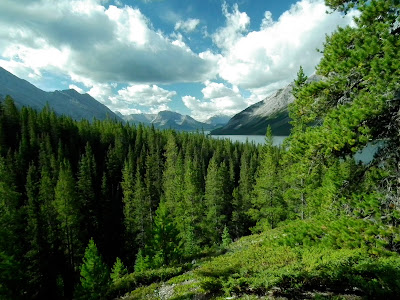 The trail heads basically along the flat through a forest full of trees flagged, felled or burned for pine beetle control. Along the way, the trail skirts a rock pile below the cliffs of Read's Ridge, home to the first of many pikas we saw. The forest thins and the trail rises onto a rocky moraine-like thing. Then the trail pops out of what's left of the forest at a huge rockslide (home to more pikas) and then just stops. It's basically up to your nose what to do next, because even sitting here after getting up to the tarns, neither one of the two trail descriptions I have makes any sense whatsoever. It's like the moment you hit the rockfall you're on your own.

To get up, we turned left at the rockfall, followed a few cairns and a really weak trail until they petered out, then just clambered up the talus on dryas as much as we could, all the while being yelled at by pikas. 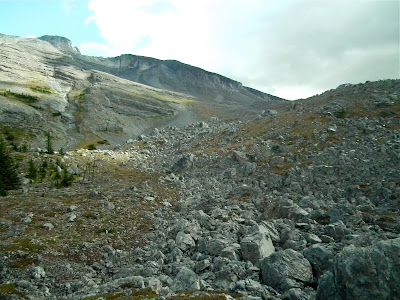 At one point we went right past a pika midden. 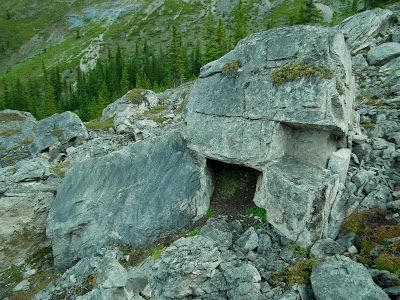 It was not hard to clamber up the talus and dryass, and it was quite enjoyable. Well, most of it was enjoyable. It was right around here that we had our first of 3 rainstorms of the day. In fact this one was a thunderstorm, and we got pelted with tiny hail, so hid in the trees for a bit till it blew by. Here's a shot of the rain itself. You can see the sun in the background. 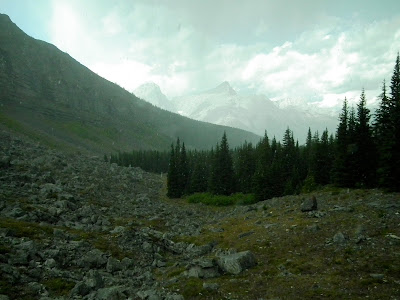 A huge rock with a cleft in it offered protection from wind and rain and a really nice lunch stop with this view: 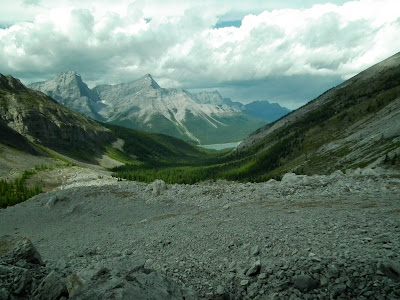 In fact, one of the best parts about hiking are the kick butt picnic spots we always have.

At this point, the hard part is over, having climbed about 550 m of the 760 m for the day. The basin in front is huge and rolling, and is a real treat to wander around. 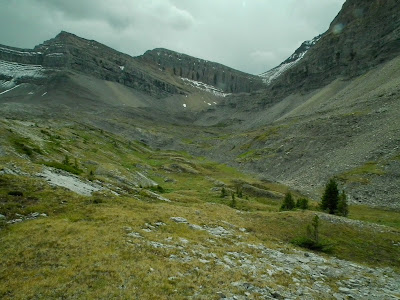 There's a pretty little lake to the left. 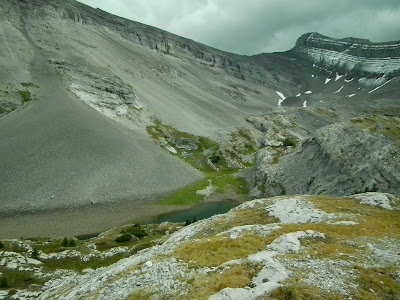 But the "destination" here lies at the far end of the meadow up over a series of rock steps, only one of which requires any real work. It has a waterfall running down it, and so even that's a lot of fun, as you climb it right next to the creek. Once at the top, you get to see the 3 tarns. One is almost dry at this time of year, but the other two are very pretty. 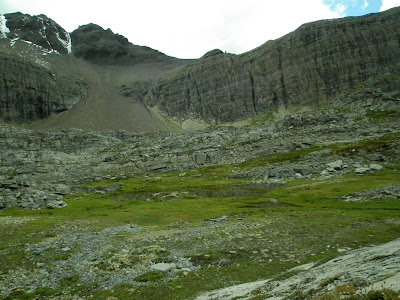 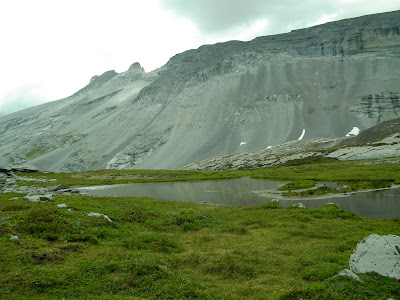 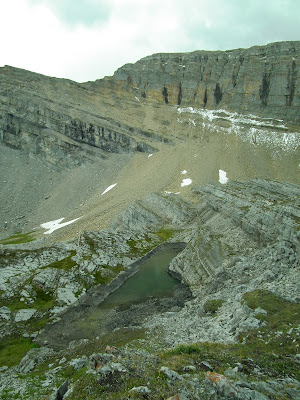 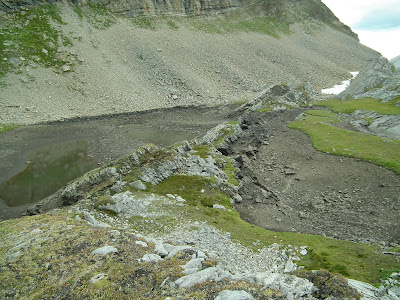 Looking back from the top of the waterfall, it's possible to make out the weakest of trails running on the left side of the creek. 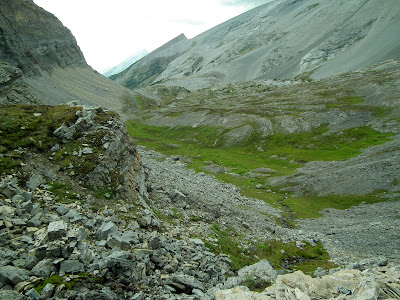 We couldn't find this "trail" on the way up, so decided to take it on the way down. It stays on the west side of the basin the whole way, heading to the small notch on the left at the base of a talus slope. The trail isn't really obvious in a few places, and the biggest problem is finding the breaks in the rock bands to get down them. 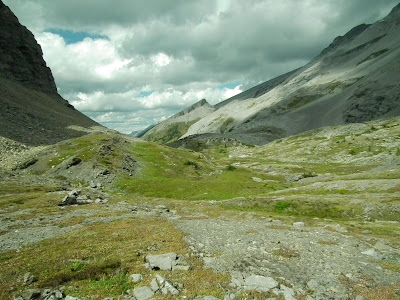 Eventually this "trail" arrives at a lot of rock. 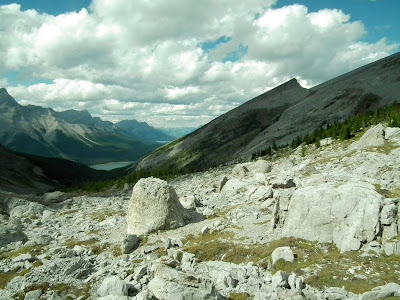 There were a smattering of pathetic cairns (2 small stacked stones? Give me a break) that generally kept us on track, though we lost the trail once or twice. And it ended up much farther west than our route up, so far so that it almost skirted the rockfall on west side. It had its own exit trail down at the forest that starts about 30 m west of the main trail, and this exit trail is good — until it hits the creek and stops. Fortunately, creek hopping at that point is easy, and the main trail is only about 40 m straight ahead. 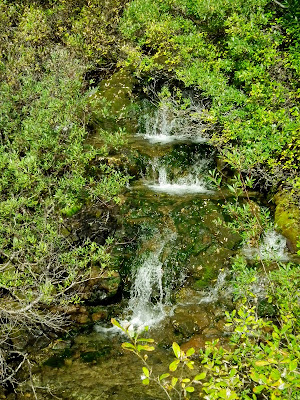 I mentioned the pikas and marmots. We probably saw 10-20 marmots, 15-20 pikas, and were yelled at by at least that many more that we did not see. While I took a lot of pika pictures, only one was good. 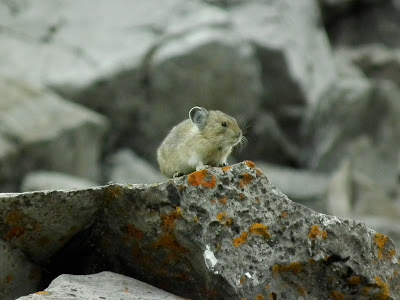 The marmots up there are friendly. We stood within 5' of at least 4 while they ate. A few squealed at us so loud we thought they were standing next to us, but were in fact over 100' away. 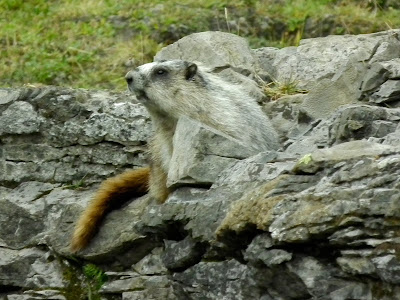 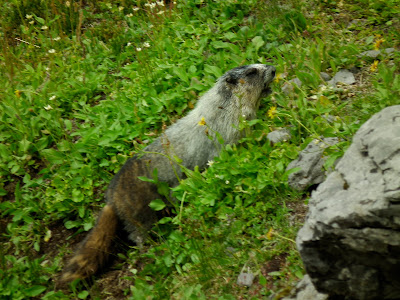 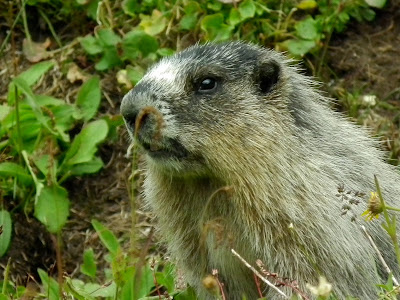 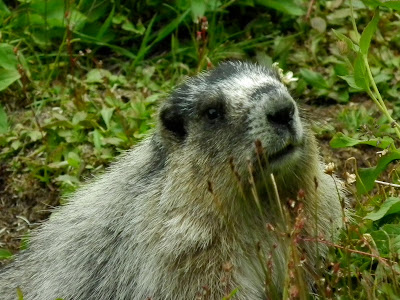 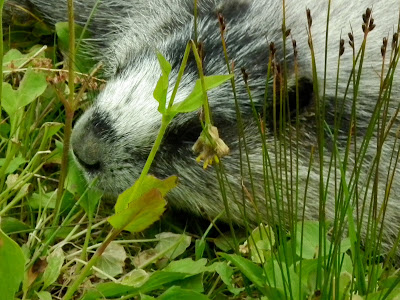 Also cool up here are the fossils, especially the corals. 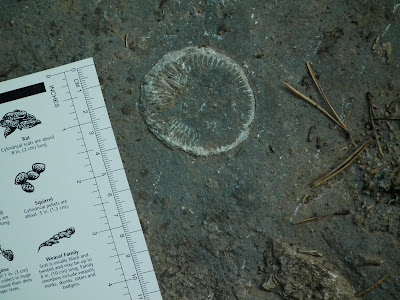 So this is an extraordinary place, where every turn is just another wow moment. If we had to do it all over again, here's my version of the trail instructions once you pop out of the forest at the rockfall:

Blocking the way is a massive rockfall. Turn right and walk about 30 m looking for a cairn marking a trail back into the forest. Look left. A weak trail marked by small cairns heads straight up the slope towards some larches. Head up, and generally stay to the right near scree slopes coming off Red Ridge. The trail comes and goes, cairns appear and disappear, but so long as you generally stay close to the base of Red Ridge, you're on track. Work your way up over a lip into the basin and all becomes much simpler. Far to the right and out of site is a sink lake; climbing up to any high point will bring it into view. Otherwise, stay on the grass on the right east side of the basin under Red Ridge. The weak trail will get better and worse in places, but just head for the base of the waterfall at the end of the basin. A fair trail climbs halfway up the waterfall, then crosses it and angles up to the left. About 100 m past the waterfall, look for an obvious break in the rock step on your right. Cross this, remembering where it is as it is essential to make it through here on the way down. Pass the first tarn on the right, stay right to make another rock step to see the next lake, also passed on the right. Make for a high ridge on the right to see the final tarn.

And do give it a go on a nice day. As I mentioned, it rained on us at least 3 times. We had conditions including short sleeves and shorts where we were hot and sweaty, times when we were wet and cold, and times when we were both since it was sunny AND raining.
Posted by Derek & Karen at 13:55