We had an uneventful drive in yesterday, with generally overcast conditions but bare roads even across the Roger's Pass. It was -1 in Calgary, +5 at the top of Scott Lake Hill, 1 most of the way through the parks, 4 in Golden, 0 at the top of the Rogers, and +14 in Kelowna. Kelowna was sunny, with summer like weather including cumulus clouds with the odd shower. It was + 6 at the base of Gem Lake at 4:30 pm local when we drove by, and we were afraid of freeze thaw and frozen death cookies for our first day of skiing.

Well, there was some of that, but mostly not. The day dawned classically Big White foggy big white-out... 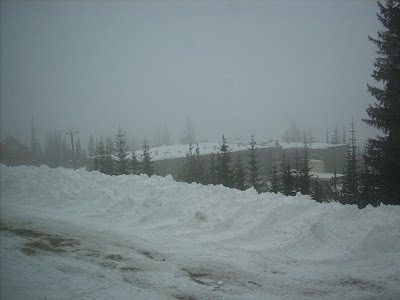 ...but the cloud base rose all day, and there was even some sun. The groomers were where to start, and our fave, Born To Run, was in great shape. This run has the best entrance of any run I have ever skied anywhere. There's big, wide spaced tress, it rolls, and it's just fun to bob and weave. 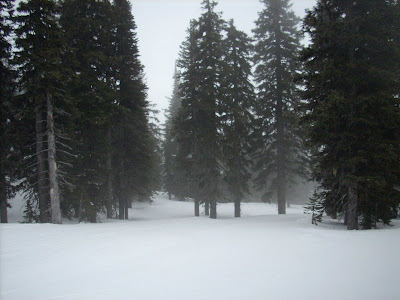 After a couple on Powder, including Powder Keg (the run of the day) we headed over to Gem, and found a lot fewer clouds, with only a bit of wind at the top. The Sun Bowl was wonderful, full of soft, easily carve-able bumps. 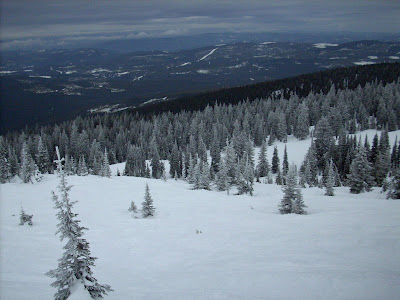 Here's KC cruising through the trees. 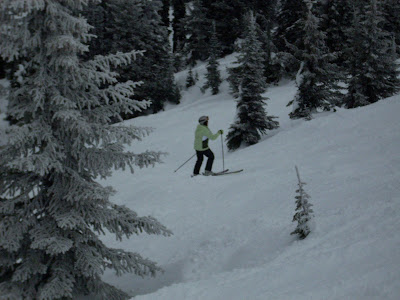 After lunch at Raakel's, we headed to the Black Forest, and did some more tree running until we hit the dead leg time, bailing fairly early after a typical Sunshine day of vert (which is good for Big White). After quitting it started snowing, but that didn't last a long time. 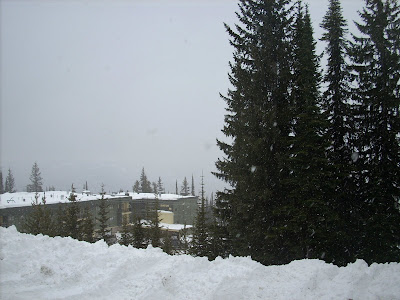