The day dawned with some promise, but deteriorated rapidly. Sunny at 7:30... but cloudy within an hour. It threatened to snow all day, but really only flurried for a few minutes at lunch. 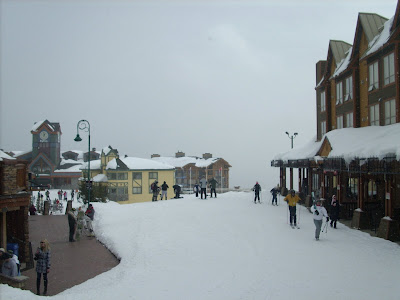 So the snow wasn't the best; the groomed stuff was really ground up ice (the sun yesterday must have been stronger than we thought). We headed to Gem to gain a bunch of vert (but mostly to play in the Sun Bowl), then headed back to the village mid morning to test skis. I tested:
Head Monster im72 (last year's model)
Fischer AMC
Atomic Blackeye &
Nordica Nitros
but none skied better than my own Nordica 9.1 MFs. The new Nordicas ski just like mine, and the Monsters are second best, better in crud, not as good in powder.

We thought the act of testing, going into & out of the shop, would keep the vert down for the day, but apparently not as we notched up almost the vert of yesterday. Our testing route was Hummingbird to the Ridge, Easy Out to Hwy 33 to Secret to the Black Forest, Cougar Alley to the Black Forest glades, then the Black Forest/Home Run & the Terrain Park for powder runs -- 1,300 vertical meters & 3 runs per cycle.

I'm disappointed I didn't find a ski that was better than the ones I'm on, which I bought in January 2002 after wrecking my Blizzard Zero E's.

At 4:45 pm, it's overcast and lightly snowing occasionally. 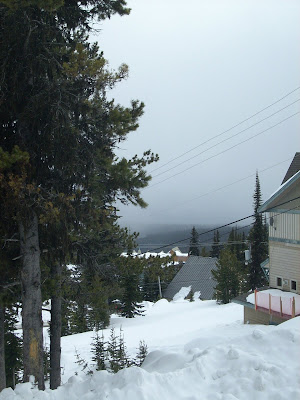