The weather forecast called for a chinook-y 11° & sun in Calgary, but a steady -6° at Sunshine, with increasing cloud all day, and significant snow starting at lunch. For once, they got it right. The front arrived about 10, giving us all of two runs in the morning clear skies. We haven't had consequential snow in the mountains in nearly a month. It showed. Some stuff had been groomed, and it's a good job, since the ungroomed was generally hard pack ice nasties. Silver Gladerunner was groomed, but good for only one run before turning into glare ice. Silver Scapegoat was groomed; Wildfire was the best, however, with about the only turns that were actually soft. They had groomed Rolling Thunder, too, but it was closed for a race.

One of my favourite silly ways to come down Goat's Eye is the cat track next to the Eagle Creek run. Horrid when ungroomed, wonderful when buffed. I once saw fresh lynx tracks down there. For fun, since I had my camera, I decided to make a movie of the run. The first part is unfilmable; it winds and twists and and is a little steep to be holding a camera. But the next section is tuck city. You get moving at quite a clip at some points, as the wind noise will attest. My only comments during the video are to note where the really flat part starts, and where the runs off the back side of the Jackrabbit Hill start merging in.

Late in the morning it started to snow. Up top, it started to get windy, and that caused wind sift to blow into a few places, like behind the snow fences on the upper face. The last few runs up top were great.

We did our typical trek to the village via Wheeler & Tee Pee Town. By the time we hit the top of Tee Pee Town, cloud-base was at the top of the Divide Chair. Two runs on Divide and it was almost down to the top of Angel. The snow up top was OK, but it was bitter cold in the wind. We bailed for lunch, and it started snowing in earnest. 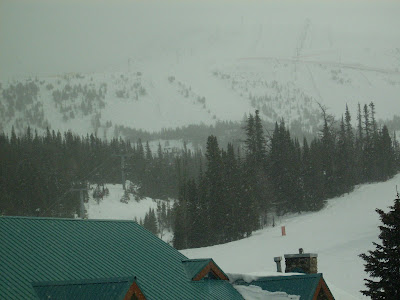 Cloud-base continued to drop, making more runs on Divide pointless. We did a few off Angel, but the viz kept getting worse, and the snow was pellets up top. Below treeline the skiing was actually quite fine, but we had no desire to play on Wawa or Wildfiire. We checked the vert, noted we had broken 9,000 m already (and it was only 2 PM), so we went to the top of Angel one last time, then headed home. It didn't feel like we skied that much (it never does on a "cruizin the groomed" day), so we probably could have done 12,000 or 13,000 without breaking a sweat.
Posted by Derek & Karen at 20:50