Snow-Forecast.com said that it would start snowing Thursday night, and keep snowing until Saturday morning, with a sunny break this afternoon. Well, almost. It did snow, and it did snow a bunch. However, it was isolated snow showers. Lots of them. It never cleared, though the sun peaked out for about 2 minutes this afternoon on the Gem side of the hill.

It dawned cloudy, foggy & snowy again, but the flakes were tiny. 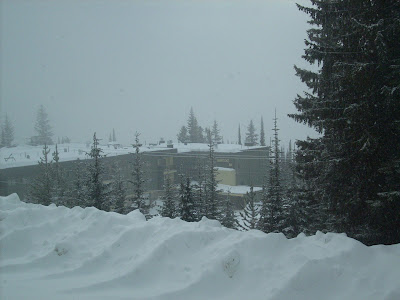 We got to the runs to find 3"-7" of powder on top of last night's grooming. Run of the day was the first on a silky Cougar Alley then diving into the endlessly untracked glades. Come to think of it, the 2nd, 3rd, 4th and 5th runs were identical. No one seemed to show up at the Forest until 10 AM, and until then, the only lines we crossed were our own. Here's one of my tracks in the glades. 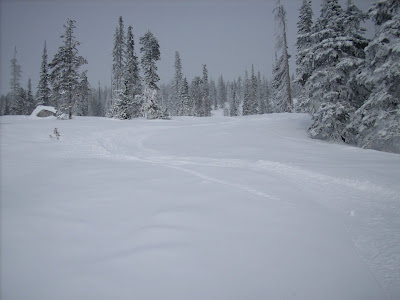 The cloud never abated. At noon, it was dumping heavily in the village. 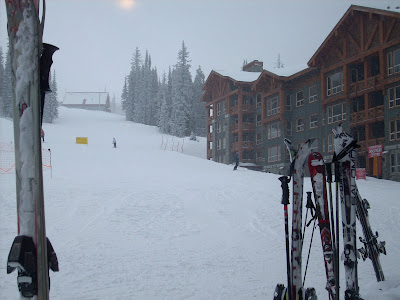 Just before lunch we found Head doing free ski demos, so I tried this year's Monster 78's (I wanted to rent them yesterday, but they were out with someone else). They're better in the powder than the 72's I tried yesterday, not as good in the crud, really not as good in the groomed, and heavy.

After lunch we went over to Gem to play in the Sun Bowl. After several tries, KC finally got a shot of me in the snow ghosts. 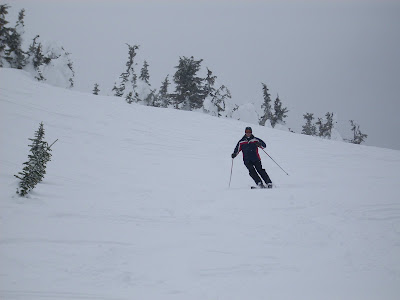 At 4:30 pm, it's lightly snowing, with the odd belching snow squall around, like this one. 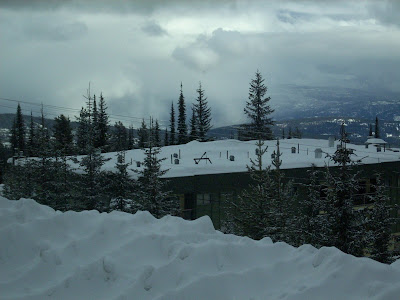 All in all, a great day despite generally awful viz. We were amazed at the high vert (highest of the 2007/2008 season), considering it was all powder runs. Today wasn't as a much fun as the last few days, though, as Alan & Claire left yesterday, and we miss them already. Still, Claire wouldn't have like today much because there was too much snow...
Posted by Derek & Karen at 17:21