So my daughter just turned 18, meaning I no longer have a kid, but a fully fledged, Grade A #1, downright beautiful Adult for an offspring. For her birthday, she asked for two things: a printer, and the use of the West Wing for the weekend so she could have a party with her friends. That left us stranded, and with a reported 36 cm in the three days leading up to the weekend, we decided to try staying up at the Sunshine Inn for laughs. In the interests of people potentially seeking a review of the hotel and its amenities, I will publish that in a separate post. This post will be about the skiing over the two days.

We had spring in January, so being Alberta, it seemed logical we would get winter in March, and that's what happened. The weather all weekend mostly sucked. It was fairly flat light except for both late afternoons, and really cold on Sunday morning (-23°), and only moderately cold the rest of the time (-15°).

On Saturday, it dawned foggy and with light snow. 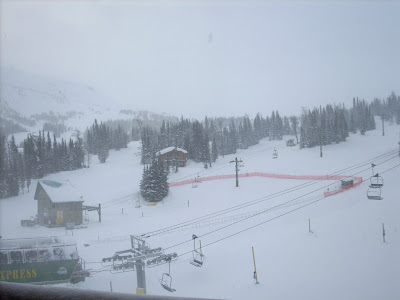 There were clearly places where the 36 cm of snow had accumulated. There were also places where it hadn't, and the top of Standish was one of them. Unfortunately, that's where we started our day. Cold, windy, and blown clear ice is a poor choice for a first run while staying somewhere that promises "first tracks". After we got our bearings by heading to Goat's Eye, we actually found some very nice stuff anywhere with trees, such as in the Goatchicken Glades, and on Gladerunner itself. 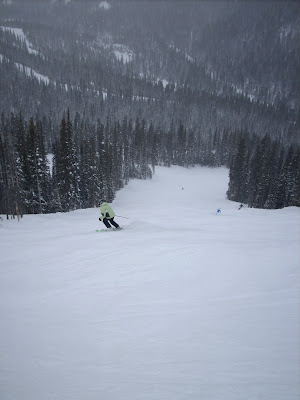 Lineups most everywhere were good (Goat's Eye, Angel) to moderate (Divide) to severe (Wawa, Standish). Because we were staying on the hill, and had bagged about the 4th or 5th chair going up Standish at 8:45 AM, we decided to take the afternoon easy and ended it with a few runs on Wawa in really wonderful snow. By 4 PM, it had been gently snowing for a few hours, and the viz was actually quite good. And between 3:00 and 3:15 the lineup at Wawa literally disappeared; we had the hill to ourselves for the last 45 min. By 3:45, there were probably only 200 people left in the village, and at 4:05 PM, we were down to the hotel guests -- all 60 of us. More on this in the Sunshine Inn post.

Sunday dawned with much more promise... 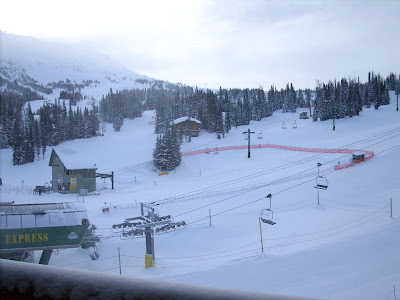 ...until we discovered it was -24° outside. At first it was calm and almost sunny. If you have ever wondered, here's what it looks like from the top of Divide at 8:30 AM. There are 4 people in this photo, all of whom are on the chair. We were the first ones up the lift. 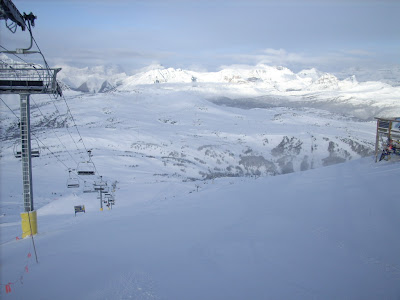 At around 10, it started to sock in and the wind came up. From the east. Normally it blows from the west, and Goat's Eye is partially protected. When it blows from the east, Goat's Eye (where we were) bears the brunt. Of a 35 km/h wind. At -23°. Horrible. Then it got worse, because it started to snow. We bailed for an early and rather long lunch to warm up. We returned to the village at 1 PM, to find the wind subsiding a bit, the snow slowing down, and the temperature a balmy -18°. By 1:30 on Divide, the temp was up to -14°, and it peaked at a rather pleasant -10° by 2:00 and stayed there, with the sun out, illuminating the snow for the first time in 2 days. The now 38 cm of fresh snow. That no one had been in because it was cold and you couldn't see it. And did I mention that there was hardly anyone at Sunshine on Sunday afternoon? Turned off by bad weather in Calgary, and cold in the AM, the parking lot wasn't even 3/4 full. No lineup on divide.

And endless fresh powder tracks in Bye Bye Bowl. All by ourselves. This photo was taken at 2:00 PM. Count the people. 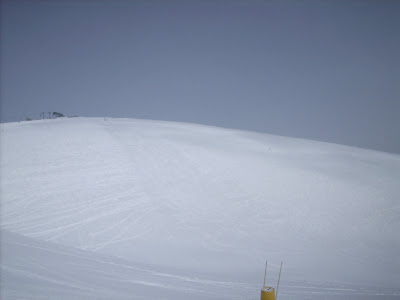 This is much busier. Or maybe not. 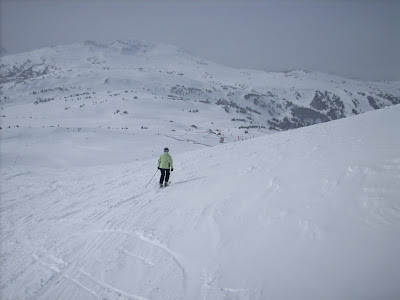 In the Bowl, the powder was boot top or deeper. On the Assiniboine Flats, it was the same. And no one around.
Posted by Derek & Karen at 23:12