KC game me a Kodak Playsport Zx3 camera to take to Maui to shoot underwater pictures and movies. 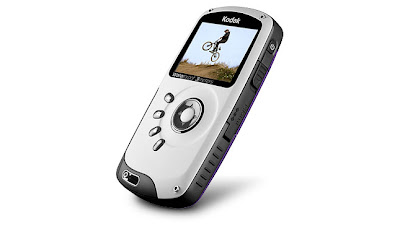 I don't tend to shoot a lot of movies in the first place; I have had the ability to do movies (including HD ones) on my last 3 digital cameras and basically never used it. So I was mostly interested in something that was good for shooting underwater, and that was good enough that I could take it skiing with me in the winter.

The PlaySport isn't it. I don't recommend the device at all.

First the Pros:
1) The thing is a breeze to use. Point and push the button to record. Push the same button to stop recording. Switching between 5 MP still pictures and various movie qualities is easy.

2) The photo quality is good, usually. For the times when it's not, see #6 in the Cons section below.

3) It's reasonably well designed for right handed people, with the control buttons in logical places.

4) I'm pretty sure you could operate the start/stop button with gloves on.

Now the cons:
1) The screen can't be seen in bright sunshine or underwater. Kodak claims it added "filter" modes to the display to make this better, but they don't make a darn bit of difference. So it's a "point and hope" camera underwater, and not much better on a sunny day above water.

2) It's not waterproof by any means. On my 3rd day snorkling with it, it leaked and died, turning on but refusing to stay on. After a lot of searching on the web (the documentation is miserable; see #12 below), I found that's how it responds when it leaks. To dry it out, you open the two access doors, remove the battery and memory card, and leave it open for 24hrs. I did this and it dried and started working again. Two snorkel days later, it died the same way (power on them immediatly power off), then an hour later just died for good. Now it won't even power on, and it's because the thing isn't actually waterproof. It's rated to only 3 m, which isn't deep, but I never took it more than 2 m down and it still leaked. It was normal to find water in the HDMI/USB connector compartment at the end of the day.

3) The one button on/off thing is great so long as you know if you're currently on or off. But the red "record" light that tells you if you're on or off is in the display that can't be seen. On numerous occasions, I stopped a recording when I thought I was starting it. I missed several recordings because it was already recording for some reason when I pressed the button. It really should have a separate start and a stop button instead of a single button.

4) Underwater audio is poor at best, and water stays in the microphone when you take it briefly out of the water.

5) The movie files are HUGE; figure 1 Mb per second for 720p mode (and it has a 1080p mode that make even bigger movies). This probably isn't the fault of the camera but of the compression mode used. I ended up shooting only in WVGA mode to reduce the download & upload times.

6) It has an "underwater" mode that supposedly colour corrects underwater shots. However, while better than no colour correction, this mode doesn't correct anywhere near enough. Every photo I took needed additional post processing in iPhoto (all aare too green with poor white balance). Photos taken in very shallow water in bright sunlight were best, but lower light or in cloud and the coulour balance was awful even with underwater mode on. Some samples are below. 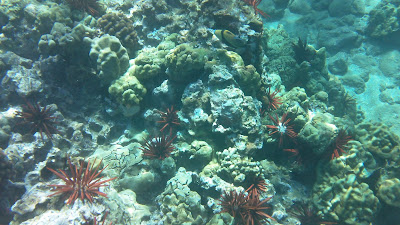 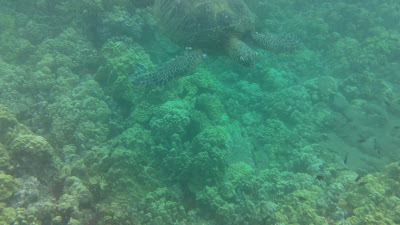 Same photo, "fixed" in iPhoto by dropping the tint and re-adjusting the white balance. 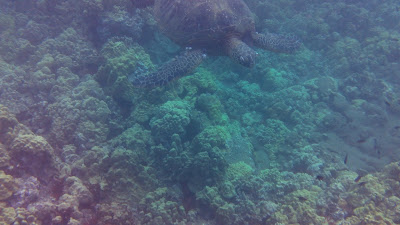 7) The movies need underwater colour correction too; however, when you move them to iMovie, the already big file size basically increases in size by an order of magnitude (your 18 second, 19 Mb file becomes a 190 Mb iMovie). This isn't the camera's fault, but it still sucks.

This movie was shot with underwater mode on, but is otherwise uncorrected. I was just floating, with the camera never more than 6' underwater in bright sunshine; the total water depth is about 30' (this was really clear). The green cast is still there. If I knew how, I would adjust the white balance and drop the green out of the tint.

8) The underwater mode is forgotton when the unit turns off (or turns itself off). So if it automatically turns itself off in a power save mode while you're snorkling, you need to go through an awkward set of push buttons using a menu on the screen you can't see to turn it back on. My way around this was to put it in underwater mode and set it to take still pictures, then shoot one still every minute or so, switching it to movie mode only when I needed to make movies.

9) You can't control how long the time is before it goes to sleep, and the documentation doesn't tell you (after using it 5 days, I think it's between 90 and 120 seconds).

10) When the battery is removed, the automatic photo counter is reset to 0001, resulting in files with replicate names. This gives iPhoto grief on uploads, because it sees duplicate file names.

11) The owners manual says the batteries basically stop working at -5 C, so it would have to be kept warm for use as a ski camera.

12) Did I mention the documentation was miserable? The paper stuff supplied with the camera was brief, but hey, you can download the extended info on the web. The extended info is vacuous, but it is twice as long.

So the thing is basically a piece of junk. It's bigger and fatter than most cell phones with the only incremental capability being that it's waterproof, and it's actually not waterproof at all. Splashproof maybe, but it's useless for snorkling.

On the bright side, it only cost $150. Now, if KC could only find the receipt, we could send it in for repairs and try to get it working again.

Or we could throw it out, which at this moment is more appealing.

Save your money and buy one of those cheap disposable underwater cameras, then scan the photos you take with it.
Posted by Derek & Karen at 16:57

Post Script #1: So it was a struggle to send it in for warranty service. You cannot locate where to send it. You must deal with an service rep first. There is no phone number to do that. I had to use a LiveChat session. Kodak's LiveChat doesn't run on a Mac environment, so I had to do it from work. It took two live chat sessions to convince them that it was really broken (hint: have the thing and all the various cables and documentation with you). Ony after they were convinced it was broken did I get an authorization code to send it in, and an address to send it to.

Post script #2:
Kodak fixed it and sent it back. But I didn't use it for a year, then took it to Maui again to shoot underwater shots. It leaked the first time it went in the water. See how badly at this post:

The thing is a piece of junk and a total waste of money. Do not buy it. I threw mine away.