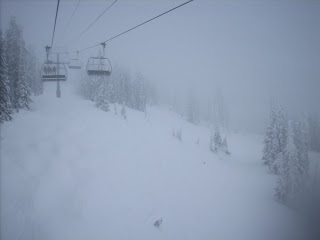 We didn't find the fog nor the viz problematic so decided to get to some spots we knew would have some rocking powder. This led us to Falcon Bowl, where the conditions were outright awesome, and we had our 3 best runs of the entire week, all in untracked fresh stuff that was at least boot top deep with lots of knee deep shots. We even managed to get a thinning in the clouds and shadows appeared, which made the runs just that much better. 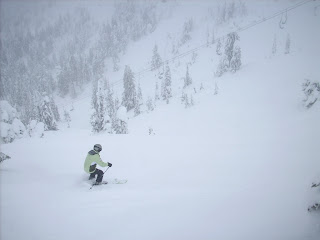 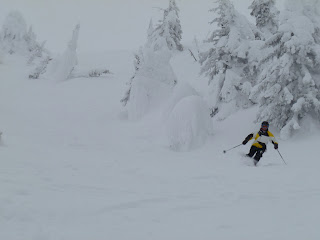 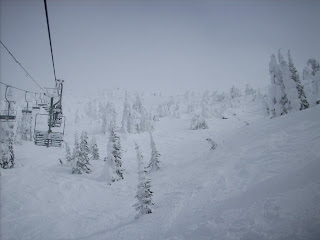 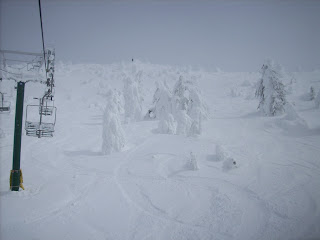 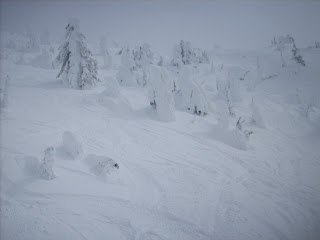 These runs put huge grins on our faces, and it was a kick to have them basically to ourselves (especially on a busy Saturday). There were only about 10 of us in there, and whenever we met someone, we were waxing poetic about having a bowl filled with powder all to ourselves. The third picture above shows 4 snowboarders hucking jumps off some cliffs, and they did a really fine job of it. A pack came out of Playground off Gem and did the same off the cliffs into Grizzly; they didn't do so well, but the wipeouts were spectacular.
On our way home at the end of the day, I fought my way into the trees off Lower Distributor and Speculation to get to the "thing in the woods". I have no idea what it is. But if you look closely, you'll see 2 Bud cans hanging from it. 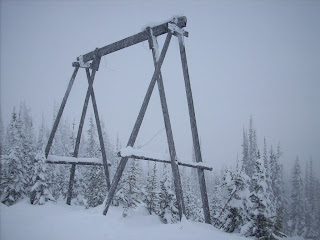 It has been an awesome week at Big White as usual (thanks in great part to my brother and his wife), but alas it is time to go home and back to Sunshine, where I expect to be skiing next Wednesday. Some of my loyal readers may be aware that I post to PowderWatch; turns out the site's owner Rob was here today, too, running tracks on the Powder Chair this morning. Well, we did a few there, too, mostly on Powder Keg and Corkscrew. I wonder if he found the cool fresh lines in the Corkscrew Glades that I was in? If I had known he was coming, I would have arranged to intercept him.
Posted by RyderDA at 20:10