Back to Sunshine after an 18 day absence.


It looked pretty cruddy this morning with low overcast, but it turned out to be a thin cloud layer topping out below treeline with mostly sun up top. 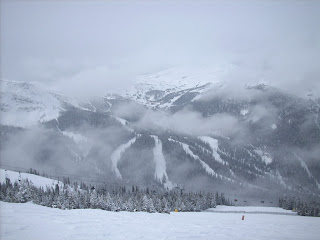 Sunshine was reporting only a couple of cm's overnight, but I found some nice boot top stuff at higher elevations. 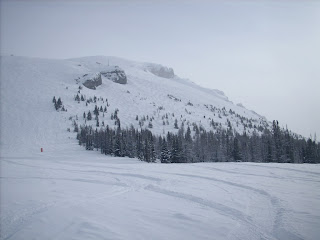 Folks were climbing up to get to the Farside chutes. 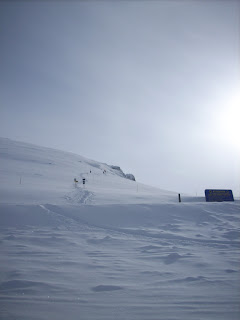 I was curious as to appeal, so took the Cleavage traverse all the way across to Think Again. There were indeed tracks on Renegade & Stampede. 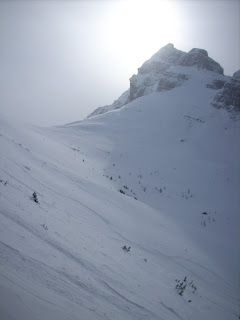 However, while there was boot top-ish fluff (and it was indeed fluffy, much lighter than Big White's powder), it was sitting on a rutted sun crust. Having not been here for a while, I can only hazard a guess that there was a bright blue sunny day in the last 3 or so that melted some stuff and re-froze it, so it looked a lot nicer than it was. Accordingly, I didn't spend a whole lot of time seeking tracks in my favourite glades, knowing they would be crusty, too. But they looked nice... 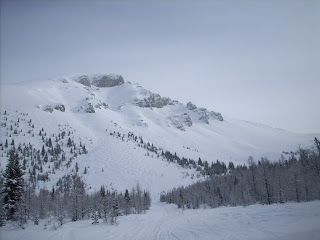 The sun was out the most early in the morning; clouds, first high overcast then mid level dense stuff, moved in as the day progressed. By 1 PM it was snowing and the viz was pretty poor for most of the PM, as this 2 PM shot looking down Red 90 onto the terrain park shows. 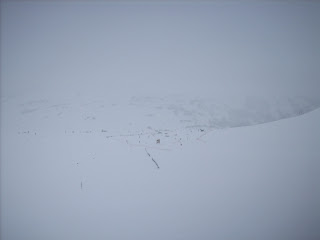 Still, the best snow I found on the hill today was in Bye Bye Bowl, where there were lots of freshies and the underpinnings were not crusty at all, but rather soft stuff indeed. I only got in 3 runs before being chased away by that vertigo sensation one gets in a white out.
Posted by RyderDA at 17:27