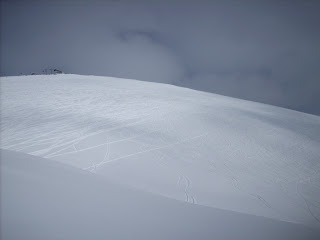 Or simply the view from the Divide chair. 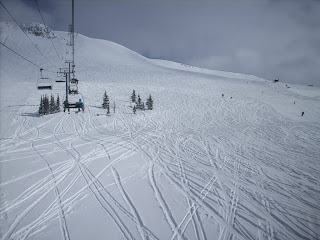 Or perhaps some of the glades on Goat's Eye. 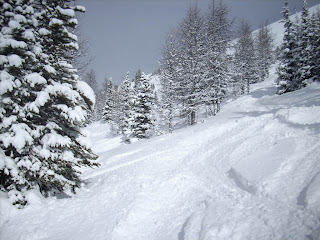 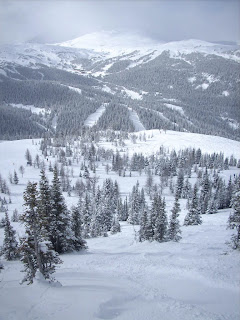 Yes, there was tons of snow and no people. It rocked, and I was having a very, very fun time.
I continued my exploration of places I rarely get to. The Bunkers looked quite sweet, and North Bunker was particularly fun if you went hard right past the snow fence and over a chute or two from the entrance. 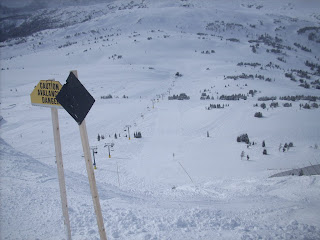 I like the Goat Chicken and Goat Sucker Glades but haven't explored them much. Yesterday, while I was riding up TeePee Town, I was studying them. They both lead to the middle of a narrow tree filled gully between Freefall and Gladerunner. Things get narrower and narrower, and you run across a bunch of orange arrows pointing you to a bailout slot that leads to Gladerunner, the normal exit for me and probably 90% of everyone else, too. But you can ski farther down, and my looks yesterday suggested the trees would open up lower down. They do, sort of. In the trail map except below, you can see the slot they converge to, and a number of marked routes. 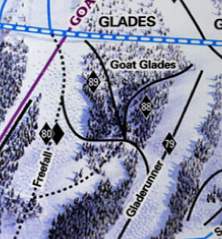 About 3 very tight "must make them or eat bark" turns below the orange arrows, you run across a snow fence supporting the traverse across from Freefall marked on the map. This is the bailout slot offered by the interesting warning signs I posted about yesterday. Note that past the snow fence lies tantalizing views of open spaces. The map says open. My looks said open. 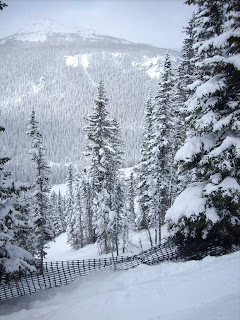 Getting past the fence is ugly; I went around it to the left, a fairly easy route. And then I found what is to me the steepest pitch of Sunshine I have yet skied; a rock free, knee deep untracked paradise of a meadow that sadly you could only fit 4 turns in before hitting a wall of way tight trees. 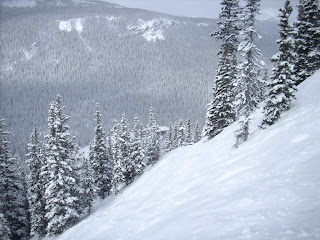 Straight ahead in the photo above is Freefall, just below the steep cliff band & tree patch that makes it a double black. So this was really fun, and an interesting alternative way onto Freefall.
Not that Ewe First is all that isolated, but I usually avoid the place because of the entrance to the traverse above Cleavage, which is normally icy, rocky and generally evil. There's been so much snow the entrance is now easy. 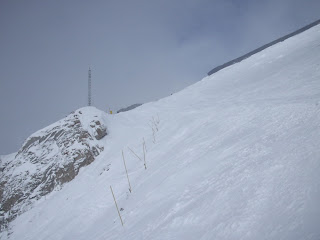 Lots of avi work was going on today. At just after 3 PM when I was leaving, they closed the ski out for 10 minutes to blow the Wild West with two bombs. This attracted/built quite the crowd, who didn't mind because the show was loud and  pretty good. We saw them lower the bombs in by wire. In the second (out of focus) shot (my camera's zoom sucks), see smoke at the top right and top centre. The centre one triggered a small avi. 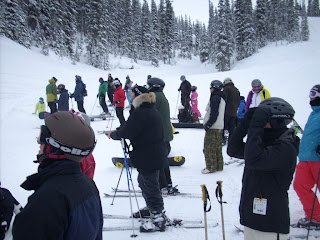 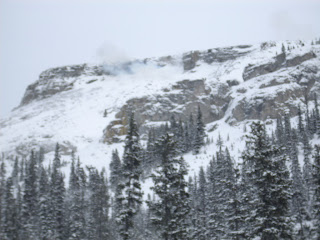 what's the "?" for- couldn't open the window.
Good thing I'm not there...you wouldn't be having this much fun
kc